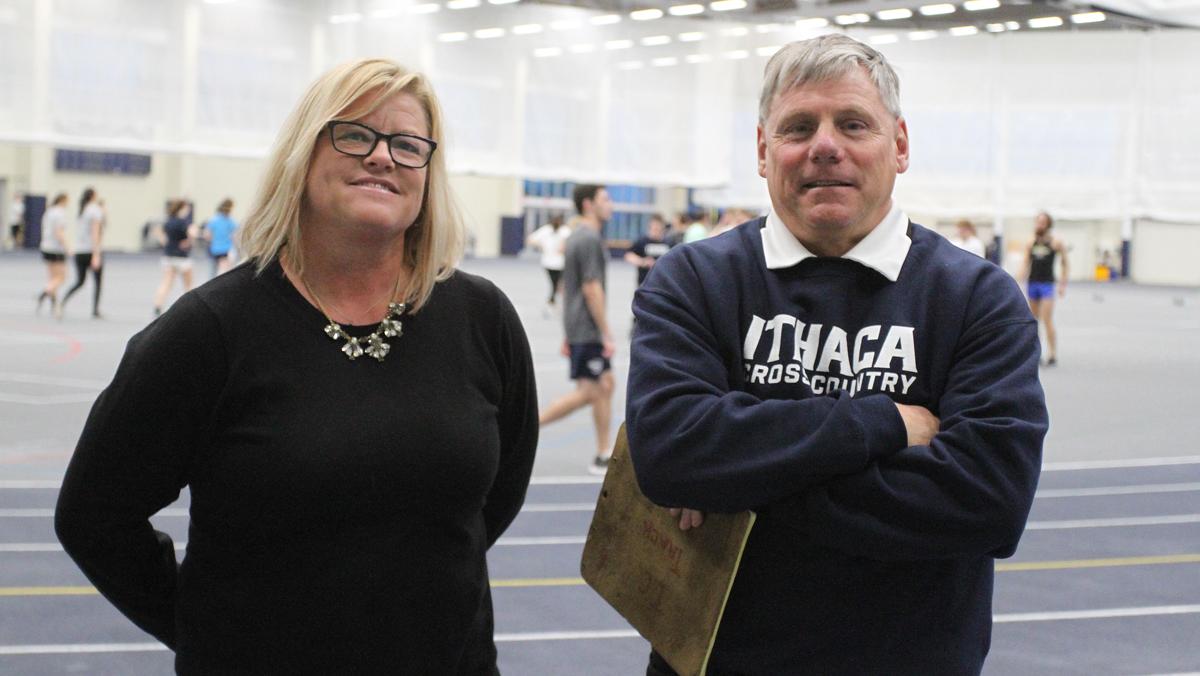 After frustration with the Eastern College Athletic Conference, five track and field coaches banded together to create a new conference called the All-Atlantic Region Track and Field Conference.

“We love the ECAC, but some policies were not really beneficial to the athletes and didn’t give them the best opportunities to compete at nationals,” Jennifer Potter, Ithaca College’s women’s track and field head coach, said.

Potter and Jim Nichols, men’s track and field head coach, were two of the coaches who helped create the conference. They said they created the conference to have the conference championship meet count as a national-qualifying meet and to increase knowledge of which teams would be competing in the championship meet. The runners will also be running on a flat track, which is preferable for athletes aiming to qualify for nationals.

Before coaches in the ECAC began seriously discussing creating a new conference, they had been talking about ideas to improve the opportunities for their student-athletes.

One way is by having the All-Atlantic count as a championship, and this gives the athletes one more chance to qualify for nationals against quality opponents.

“The main focus of the conference is to give our student-athletes the best chance possible to have success at NCAAs,” Potter said. “We were looking to have a meet the week before nationals so the athletes could be in competitive shape going into nationals.”

Senior Taryn Cordani said the meet will serve as an additional chance for athletes to qualify for nationals, as it is very common for athletes to rely on this meet to get to nationals. Last season, the ECAC had 195 teams in the conference, and the coaches never knew what their competition would be because teams were not required to participate in the meet. With the All-Atlantic, the coaches agreed that every college in the conference will be competing in the championship.

“The ECAC track and field championships were becoming less and less appealing to track and field teams as many New England schools and fewer SUNYAC schools were attending the meet, which made it much less competitive,” James Goss, commissioner of the All-Atlantic, said.

Senior Eric Melcer said the ECAC and the Empire 8 did not have the quality of competition that the Bomber track and field athletes needed and did not allow the athletes to be pushed as far as they needed to be.

“With improved competition, all our athletes will have a better chance of hitting a top time or even just hitting the time they set as a goal,” he said.

Nichols said another major problem with the ECAC was that the conference would not adjust the track to become a flat track if it was already set up to be a banked track, which is slightly slanted. Running on a banked track can be an advantage, but to qualify for nationals on a banked track, the runner has to run 12 seconds faster than if the track were flat.

The All-Atlantic is only for track and field and does not include cross-country. Nichols said this is not likely to change in the future because cross-country has stiffer competition in its NCAA qualifying meet and has a regional championship.

“There are no official regional championships in track and field — every performance gives the chance for an athlete to qualify for nationals,” Nichols said.

This year, 24 of the 27 Bomber sports teams, including the track and field teams, entered the Liberty League Conference. The Blue and Gold and 30 other colleges in New York and New Jersey left the ECAC to form the All-Atlantic. There are 164 teams remaining in the ECAC.

Unlike other sports, track and field is governed by two governing bodies. Last season, the Blue and Gold competed in the Empire 8 Conference and the ECAC.

Each conference has a number of regular-season meets and a championship meet.

The Bombers also previously competed in an unofficial state conference, the New York State Collegiate Track Conference, which was run by the coaches and hosted an informal championship. This conference allowed 13 teams to compete in tougher competition than the teams in the ECAC championship. The NYSCTC became the All-Atlantic conference and added 18 additional teams from the ECAC, Potter said.

After the Liberty League and Empire 8 voted to hold their meets the same weekend as the planned NYSCTC meet, the push to create the All-Atlantic rose into high gear. This would cause the loss of a championship meet for track and field.

The Liberty League and Empire 8 meets will be held Feb. 24 and 25, and the All-Atlantic meet will be held March 2 and 3. The NCAA Division III track and field championship will be March 9 and 10.

The indoor All-Atlantic championship meet will be held at Ithaca College. Cordani said that this should really benefit the Bombers.

“It will be beneficial for us that the championship is being held at Ithaca College, so we will be used to the track and be able to use our own locker room,” Cordani said.

During a June 5 meeting at the college, the coaches in the All-Atlantic officially recognized the conference, and on Nov. 15, the NCAA approved it.

While all of the excitement of a new conference is fresh, this first year will still be a huge adjustment for the South Hill squad, as it is a start of a new era for the track and field teams.

“We won’t necessarily see benefits ’til after we see the conference in action,” Potter said. “I will miss the ECAC, and I know the players will, too, but we will still see strong competition in this conference. This year is a year of change in general, as the whole athletic department is still adjusting to the new Liberty League.”

Men’s track and field wants to conquer its new league

Women’s track and field goes for the first-place podium