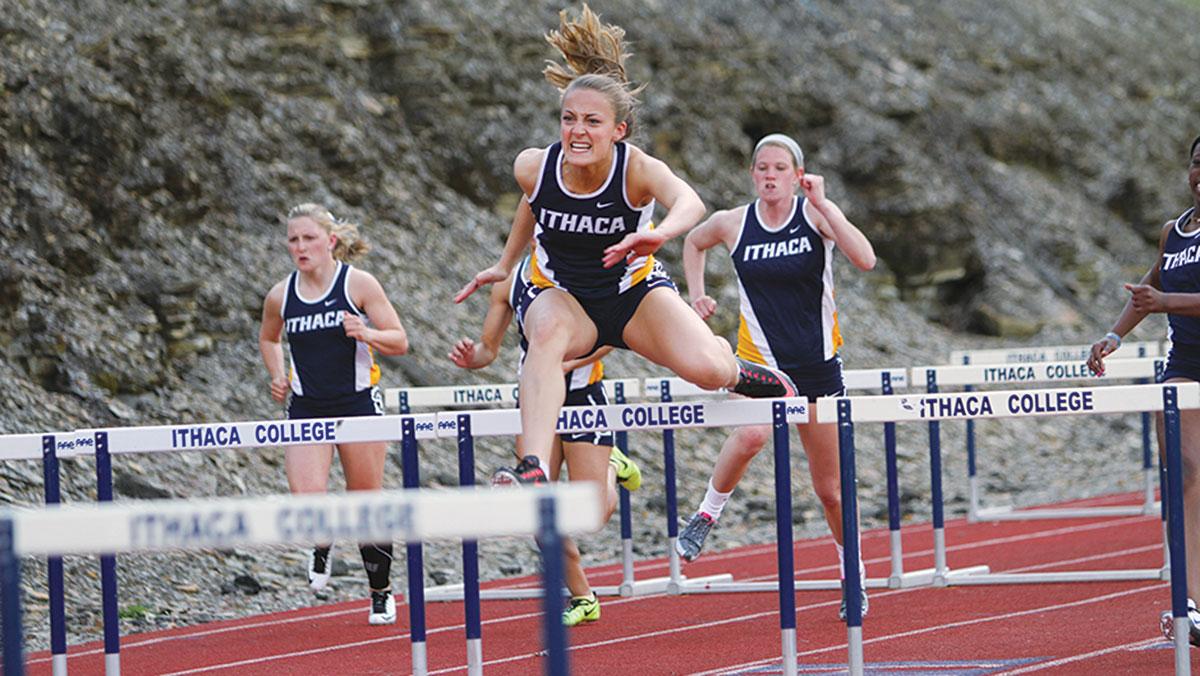 The women’s track and field team solidified its eighth consecutive Empire 8 Championship at St. John Fisher College in dominant fashion. The Bombers won by 148 points and finished with 63 student-athletes in the top eight in their respective events in the April 19 meet. The Blue and Gold have emerged victorious in 10 of the last 11 outdoor conference championships, and head coach Jennifer Potter said her team’s success can be largely attributed to tapering workouts leading up to the meets.

According to Marathon-TrainingSchedule.com, tapering is decreasing the distance or intensity in a track athlete’s practice schedule, lifting routine and workout length in the weeks approaching an important meet. This duration depends on how quickly athletes adapt and recover during their workouts. It is aimed at allowing the body to rest while still maintaining all of the progress from training.

However, Potter said her team’s tapering system is different than most because there are different taper groups. This is due to the fact that different athletes’ seasons will end at different times depending which meets they qualify for. Some athletes will be done in two weeks after the New York State Collegiate Track Conference Championships while others will be competing for five more weeks until NCAA Nationals.

“You have to be very careful about how you taper and when you taper because not everyone is done at the same time,” Potter said. “You have to stay on top of it and be communicating with the event and strength and conditioning coaches as well as the athlete about their goals.”

Taper groups are split up by event and when their peak performance needs to be. This is all laid out on workout sheets that are produced by Potter and her coaching staff. The technique is further complicated by the differences in training of event groups.

“Our volume in practice decreases quite a bit whether it be miles in our distance runners, intervals in our sprinters and hurdlers or touches in our jumpers,” Potter said. “It’s more quality work.”

For senior sprinter Rachel Friedman, tapering means going from intensive workouts on the track to shorter workouts, less weightlifting and utilizing the pool to relax muscles. She said these techniques allow her body to feel lighter and less tired.

In contrast, junior middle distance runner Michaela Cioffredi said her tapering is aimed at keeping her body conditioned and maintaining her strength. Her tapering involves reducing mileage and reps in speed workouts, but never the intensity. Weightlifting is also decreased, and instead yoga or stretching will be implemented into her practice routine.

“I always think of sprinting as really hard on my body because you’re going full out on your body for such a short period of time, and compared to distance races, they run at a steady pace,” Friedman said. “I think that makes my taper more of a drastic change.”

Both Friedman and Cioffredi said tapering is their favorite part of the season.

“It’s great because you’re in great shape, but you don’t actually have to do that much work,” Cioffredi said.

Potter said another complication with tapering is the coaching staff cannot be exactly sure when an athlete’s season will end.

“There’s athletes that are on the bubble,” Potter said. “But we train them like they are going to continue moving forward.”

As the Eastern College Athletic Conference meet approaches, Potter said she and her coaching staff are looking ahead to create practice schedules that will allow athletes to be at their peak.

“You have to let their systems rest and recover more so that they are fresher, feeling better and can perform at their maximum,” she said. “I don’t need us at that level right now.”

Friedman and Cioffredi are both looking to peak for the ECAC meet in four weeks in order to redeem themselves after placing second in indoor ECACs. They said they trust their coaching staff to get them to that level.

“Without Coach Potter, I don’t think that we would be as successful or have won as many championships as we have,” Friedman said.

Although Potter said some athletes will begin tapering within the next few weeks, the Bombers are still very much in the thick of their season. There are still six meets remaining until ECACs.

“Track isn’t rocket science,” Potter said. “You just have to train the systems enough to prepare them for what they need to do and then slowly take it away when the athlete needs it so that they are able to be in their tip-top shape.”