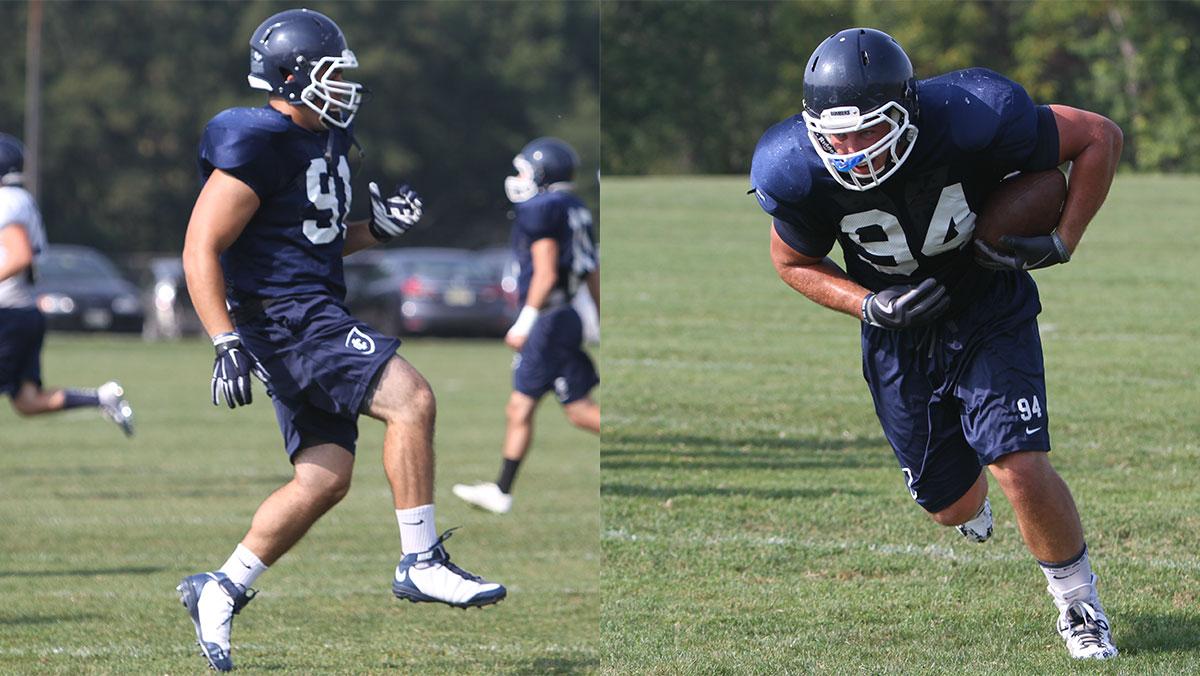 Whether it is at the Pop Warner, high school, college or the professional ranks, each season, coaching staffs emphasize the importance of developing chemistry among one another to their players.

Senior linebacker Logan Murphy and junior defensive end Rob Barbieri of the football team have had that down pat for nearly eight years.

Prior to their collegiate careers, Murphy and Barbieri attended the same high school — Arlington High School in Poughquag, New York — and played side-by-side for the Admirals. However, Murphy said although he and Barbieri played football together since middle school, their friendship did not begin until they reached high school.

Murphy said he and Barbieri were able to become close friends their first year of high school due to the fact that they both played as linebackers. By his senior year at Arlington, Murphy became one of the captains of the team.

“We are very good friends with different personalities,” Barbieri said. “He is a little bit more intense. I would say I am little bit more reserved. His leadership qualities — bringing the intensity to the field every single day … the intangibles like the emotion and the energy he brings — those are things I took away from him.”

Murphy said their dueling personalities have allowed each other to share new perspectives on football over the years.

“He definitely has different views on a lot of stuff,” he said. “We have different approaches on how to react to mistakes. He keeps a leveled head. I am more of a hot head. He mellows me out a little bit.”

Even though he had graduated and moved on to the collegiate level, Murphy said he still remembered Barbieri and the Arlington football team.

Murphy said he had high regard for Barbieri’s skill set as a football player coming out of high school and urged Barbieri to come play with him as a Bomber.

“I knew that he was good enough to make an impact in college,” he said. “So [I told him], ‘Hey, why not come to Ithaca?’ Just continue that good chemistry that we have had all throughout high school.”

During the recruitment process, Barbieri stayed overnight at Ithaca College with Murphy. Barbieri said he felt at ease sharing the experience with someone he was well acquainted with. Despite this, Barbieri said his decision on what college to attend was not as clear-cut as it might have appeared. At one point, SUNY Cortland was a legitimate landing spot for Barbieri’s freshman year.

Barbieri said one of the defining moments during the recruitment process was when he attended the Cortaca Jug game as a Cortland recruit during his senior year of high school.

“I tried to stay in touch with Logan throughout the season,” he said. “He actually informed me he was starting the game. I will still remember being in the Cortland stands, watching Ithaca [play] the way they play, seeing one of my good friends Logan out there succeeding as a freshman.”

Barbieri said he and Logan exchanged text messages after the Bombers lost to the Red Dragons.

“After the game, I texted him saying, ‘Hey, great game. You played really well. Tough loss.’ And he [responded], ‘Thank you. You should really consider Ithaca. This would be a really good place for you,’” Barbieri said.

At the time it was still early on in the recruitment process. However, Barbieri said that moment certainly focused his attention on the college. Since his arrival at the college, Murphy said the chemistry as well as his friendship with Barbieri has continued to evolve.

“We were good friends in high school,” he said. “I would say we are almost like brothers right now.”

Head coach Mike Welch said the deeply rooted chemistry between Murphy and Barbieri is notable based on his own experiences playing football with his friends.

“One of my best friends from high school was a defensive back, and I was a running back here,” Welch said. “We don’t want to leave each other down, but also we want to both do very well. I’m sure that is in the back of their minds.”

Barbieri said one of the greatest aspects of his relationship with Murphy is the fact that the chemistry is the same on and off the gridiron.

“We like to joke around a lot off the field,” he said. “As serious as we are about what we do on the field, a lot of times we will keep it relaxed on the field sometimes, too. We will bring some jokes that we have off the field into practice. We don’t like to take ourselves too seriously in that sense.”