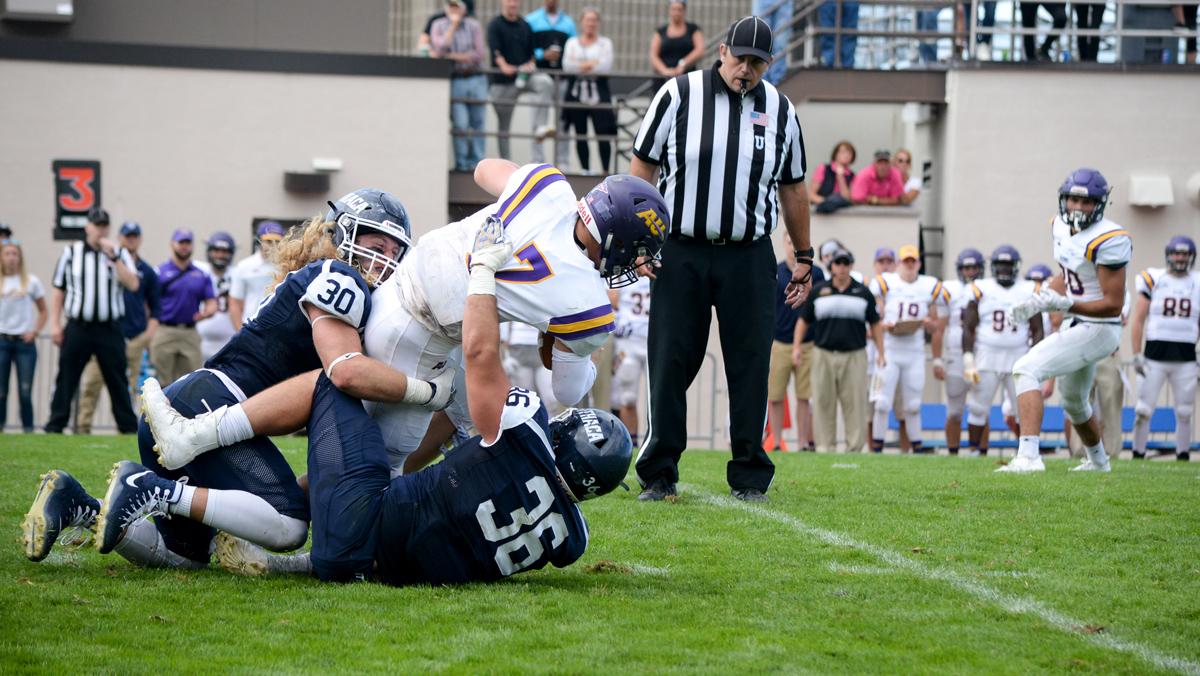 When senior defensive tackle Brad Helmkamp went to meet newly hired head coach Dan Swanstrom at the beginning of the 2017 spring semester, he was coming off of a season in which he was named an all–Empire 8 Conference honorable mention — as a fullback.

During this meeting, Swanstrom told Helmkamp he should consider moving to the defensive line, a position he had never played before. Swanstrom was implementing a new spread offense that did not use a fullback because it maximizes the number of wide receivers on the field.

Helmkamp said he never hesitated switching positions, since he played both linebacker and fullback in high school.

“When I told coach Swanstrom I played fullback, he asked me how I felt about playing defensive line, and I told him I would do whatever it takes to get on the field,” Helmkamp said. “Coming out of high school, I thought I was going play linebacker, but with Kenny and Loizos, there was no room for me.”

Dan Loizos and Kenny Bradley are two senior linebackers on the team who have played in every game.

Senior defensive end Ryan Moody found himself in a similar situation. After spending his first two seasons on the South Hill squad as a defensive back and his junior season as an outside linebacker, he was informed by incoming defensive coordinator Mike Toerper that the defense would no longer include any outside linebackers.

Moody said Toerper asked him what position he wanted to play this season.

“We tried it out for the first time in the spring when we started practicing under the new coaching staff, and I loved it,” Moody said. “When coach Toerper asked me how I liked it, I told him to keep me on the line because I loved it so much, and coach was really excited.”

Helmkamp said he enjoys playing defense because it is not as structured as playing offense.

“When I was playing offense, it was so much more restricting because you have to do exactly what the play calls for,” Helmkamp said. “On defense, there is a lot more freedom because it requires you to react on the fly based on what offense does.”

Toerper said he realized from the first time he saw both Moody and Helmkamp work out that they would excel at their new positions.

“Watching the way those guys worked in offseason conditioning drills, the weight room and eventually spring practices, it was a no–brainer that this was the right position for them because of how hard they worked,” Toerper said. “I could see how committed they were to being top–notch defensive linemen.”

Moody and Helmkamp’s commitment reached its height in the summer when they worked on their new positions together almost every day. Moody said they progressed greatly due to their summer workouts.

“Brad and I are roommates, and we were both living in Ithaca over the summer,” Moody said. “When we’d get home after the day we would go to the gym and work out and then hit the field and do hand drills and footwork drills to work on our technique.”

Through three games at their new positions, Helmkamp has made 16 total tackles, while Moody has nine total tackles, including one sack and one and a half tackles for a loss.

Helmkamp said there are some aspects of the position that have come easily for him.

“I still have the defensive instincts from playing linebacker in high school, such as how to shoot your arms through a tackle and read the hips of an offensive player,” Helmkamp said. “Some of the more detailed parts of the position have been harder for me to learn, like consistently taking the right steps and conforming to the team’s defensive philosophy.”

Toerper said Moody and Helmkamp have showed to the two attributes he looks for in all defensive lineman.

“All defensive lineman need to have a high motor and aggression, and both of them have these qualities to the fullest,” Toerper said. “With every game they play, they are learning more about the position. And they’re very coachable players, so if they make a mistake once, they won’t make it again.”