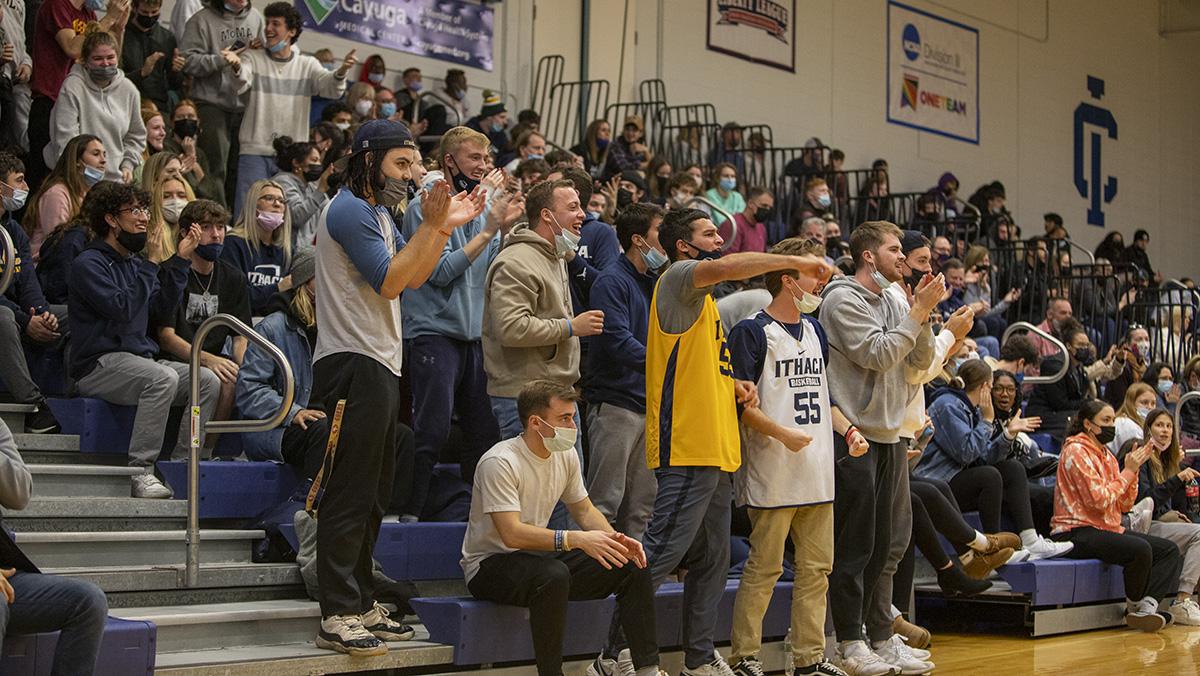 In order to prevent the spread of COVID-19, spectators outside of the Ithaca College community will not be allowed to attend athletic events until at least Feb. 7.

The college implemented the updated spectator policy Jan. 12, allowing only students, faculty and staff members to attend competitions until the situation is further evaluated at the beginning of next month. The college’s Department of Athletics and the Health Safety Advisory Group released the updated guidelines Jan. 10. Approved members of the college community who attend events during this period will be required to show a valid college ID, but they will not be asked to present their green badge, said Susan Bassett, associate vice president and director of Intercollegiate Athletics and Recreational Sports.

This is a change from the fall semester, in which full–capacity crowds were allowed to attend athletic events that took place on campus.

The statement said these regulations impact events held at the Hill Center and the venues located inside the Athletics and Event Center, including Glazer Arena and the Kelsey Partridge Bird Natatorium. In the statement the department said it is optimistic that all spectators will be allowed on South Hill again when the policy ends Feb. 7.

“The policy will be revisited during the first week of February with the hopes that this is a temporary decision and fans will be welcomed back to South Hill for the remainder of the winter season,” the statement said.

The announcement came in advance of students returning to campus for Spring 2022. The move-in process for students spans from Jan. 18 to 30, with the first week of classes being held online. The change in spectator policy is also attributed to an increase in COVID-19 cases in Ithaca and Tompkins County, the statement said. There were 394 active cases of COVID-19 as of Jan. 24 and 1,548 active cases on the day the policy was released, according to the Tompkins County website.

Bassett said the decision to prohibit outside spectators was made to help ensure that the college has a smooth transition into the upcoming semester.

“[The Health Safety Advisory Group has] been analyzing the escalation in cases because of the Omicron variant and looking at what we need to do to safely reopen campus starting on [Jan. 18],” Bassett said. “This is a mitigation measure to help reduce or eliminate the spread of the virus, as we’re bringing back more than 4,000 students to our campus.”

Bassett also said these measures have been put in place to prevent a spike in COVID-19 cases from occuring in the local community, which took place at the end of Fall 2021. At the end of last semester, the college was operating in “Orange: Moderate Risk” status and Cornell University was at the “Red: High Risk” alert level. There were 11 active student cases of the virus at Ithaca College as of Jan. 24, according to the COVID Dashboard.

“We have a responsibility and a commitment to our community, to the city of Ithaca and Tompkins County to do the best that we can to reduce the incidence of the virus and the spreading of the virus,” Bassett said.

“Our parents have watched us play this sport for years on years, and especially for seniors, it’s the last year that they get to watch us play,” Sinon said. “So it’s just a little somber that they’re not going to be able to watch some of the games during our last year as an athlete.”

Jennifer Potter, women’s track and field head coach, said that while she would also like to have family members and friends of the athletes attend events, she is simply glad that her team has the opportunity to compete.

Bassett echoed a similar sentiment, saying the college’s teams have made great strides in the past year to participate in athletics. The college canceled its Spring 2020 season March 13, 2020 as a result of the COVID-19 pandemic, and the Liberty League did not resume competition until March 26, 2021.

“Everyone is disappointed and everyone really wants their parents and families to be able to come and see them play or compete,” Bassett said. “But we all also vividly remember that a year ago at this time, we were not competing. … We’re all trying to keep that in mind while we live with this hopefully temporary situation, that has implemented some restrictions to maintain community safety.”