Victory in the Bronx: Bombers take back the jug with win over Cortland 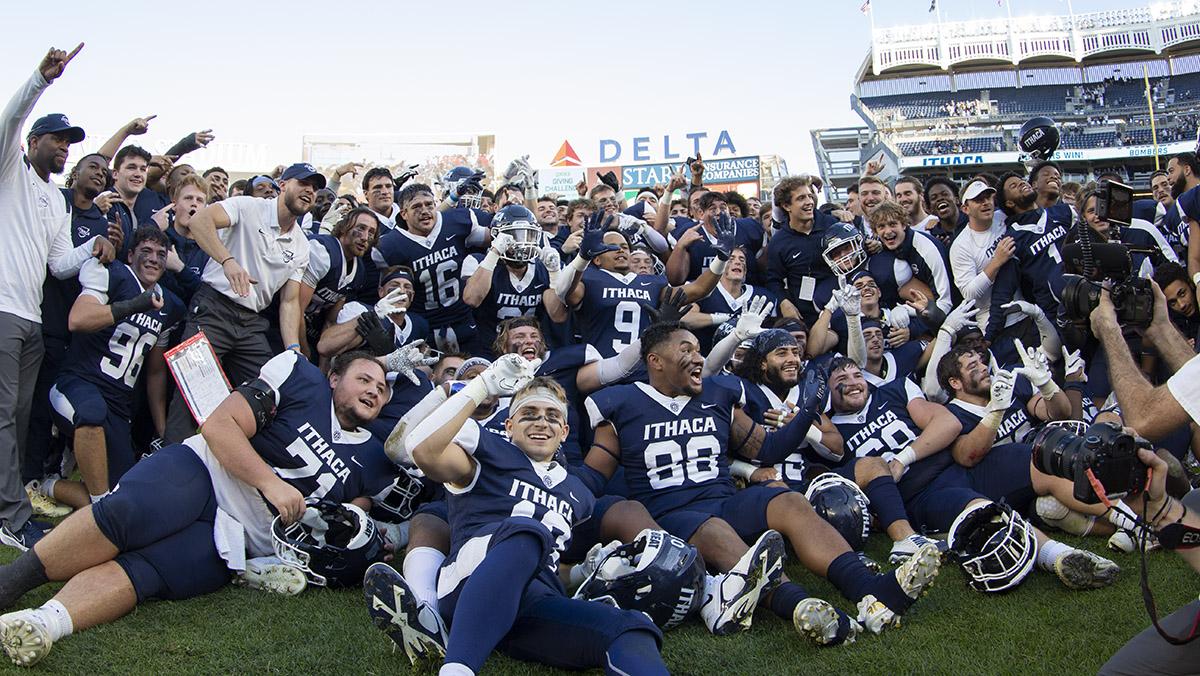 The No. 11/12 Ithaca College football team defeated the No. 9/11 SUNY Cortland Red Dragons 34–17 in the 63rd annual Cortaca Jug at Yankee Stadium in the Bronx, New York. The victory provides the Bombers with a 10–0 record in 2022, which is the program’s first undefeated regular season since 1986.

SUNY Cortland’s offense had a solid afternoon, but was ultimately stifled by the South Hill squad’s defense. The Red Dragons logged 186 rushing yards, along with 117 passing yards. Senior defensive back Kevin Schoch was a key defensive contributor, leading the team with 12 tackles and one interception. 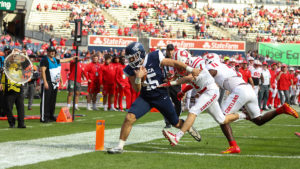 From left, junior running back Jake Williams takes it in for a 10-yard touchdown reception in the first quarter, while being tackled by sophomore defensive back Ty Kolar and junior defensive back Mark Noel. NOLAN SAUNDERS/THE ITHACAN

The Bombers struck first with 10:31 remaining in the first quarter, taking an early 7–0 lead over the Red Dragons. Wingfield completed a screen pass to Williams, who made his way into the right corner of the end zone for a 10-yard touchdown. Senior kicker Nicholas Bahamonde followed this by converting the extra point.

SUNY Cortland answered back later in the quarter, tying the game at 7–7 with 3:25 to play. Sophomore quarterback Zac Boyes evened the score by finding junior wide receiver J.J. Laap in the left corner of the end zone. Sophomore kicker Mike Baloga then sent the PAT through the uprights.

Boyes, who was not on the team when the colleges faced off at MetLife Stadium in 2019, said the opportunity to play in the historic venue was incredible, regardless of the game’s outcome.

“It’s an awesome experience to be able to go out there [to Yankee Stadium],” Boyes said. “[To] take a look around and see all the people that are dedicated and really passionate about the game, you know, is something that you will remember forever.”

The South Hill squad got the lead back with just 0:05 left in the first quarter, taking a 10–7 advantage. Bahamonde put the college back in front with a successful 37-yard field goal attempt.

The Bombers got the scoring started in the second quarter, extending their lead to 17–7. Wingfield completed a screen pass to senior wide receiver Michael Anderson, who hustled past the goal line for a 12-yard touchdown. Bahamonde split the uprights on his extra point try with 10:14 to go.

The Red Dragons had an opportunity to narrow their deficit as the first half was approaching its close, but the college managed to halt the rally with just 0:11 remaining in the stanza. SUNY Cortland faced third and two at the Bombers’ two-yard line, when senior linebacker Matt DeSimpliciis intercepted Boyes’ pass in the middle of the end zone.

The South Hill squad took a 17–7 lead against SUNY Cortland into halftime.

The Bombers began the second half with an exclamation point, as senior wide receiver Anthony D’Addetta returned the opening kickoff 87 yards. This allowed Bahamonde to extend the college’s lead to 20–7, converting a 24-yard field goal with 13:15 to go.

The Red Dragons responded later in the frame, narrowing their deficit to 20–14 with 6:52 left in the third quarter. Sophomore running back Jaden Alfanostjohn ran up the middle for a one-yard touchdown rush. Baloga followed this with a successful PAT.

SUNY Cortland continued to battle back at the start of the fourth quarter, trimming the South Hill squad’s lead to 20–17 with 13:13 to play. Baloga put a few more tallies on the scoreboard with a 29-yard field goal.

The Bombers answered just a few minutes later, advancing their lead to 27–17. Wingfield let the ball fly by throwing a 40-yard touchdown pass to senior wide receiver Julien Deumaga, who leaped over a defender to make the catch before running into the left corner of the end zone. Bahamonde’s extra point try was good with 9:28 remaining in the contest. 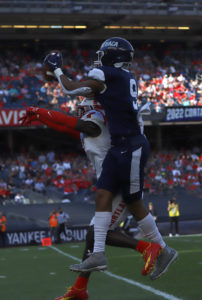 Michael Toerper, head coach of the Bombers, said he was impressed not only by Deumaga’s catch, but that he was ready for the play given his tumultuous season.

“I just want to give Julien [Deumaga] credit there,” Toerper said. “He’s a guy that, you know, started off really hot in the year, the ball found him a lot and he made a lot of plays. And toward the end of the season, the ball didn’t find him as much. … Just really proud of him.”

The South Hill squad didn’t let up as the quarter progressed, making it a 34–17 ballgame. Williams sprinted toward the left corner of the end zone for a 43-yard touchdown. Bahamonde then converted his fourth PAT of the afternoon.

This would hold as the final score, as neither team scored during the remainder of the contest.

Curt Fitzpatrick, head coach of the Red Dragons, said he knows the game is a learning experience for his team. The Red Dragons still have at least one more game left in the NCAA Tournament because they won their conference, the Empire 8.

“We lost the game, you can’t replay it, it’s over,” Fitzpatrick said. “We want to look through the windshield, not through the rearview mirror.”

Toerper spoke highly of Boyes after the game, despite the rough outing for him and the Red Dragons.

“[Zac] Boyes did a great job, picking up third and fourth downs,” Toerper said. “He’s a great player. A lot of respect for that young man, and a lot of respect to coach Fitzpatrick.” 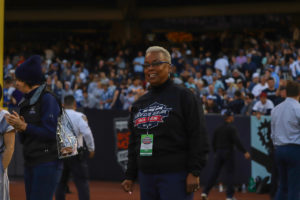 The Bombers will begin postseason play next week, as the team will compete in the first round of the NCAA Championship on Nov. 19. The college’s opponent will be announced at 5 p.m. Nov. 13 in the D-III football selection show. DeSimpliciis said he and the team are ready for whatever comes next.

“I think we got something special, and I think we just gotta keep it rolling,” DeSimpliciis said.

Update: This story is being updated with quotes from players and coaches as they become available.