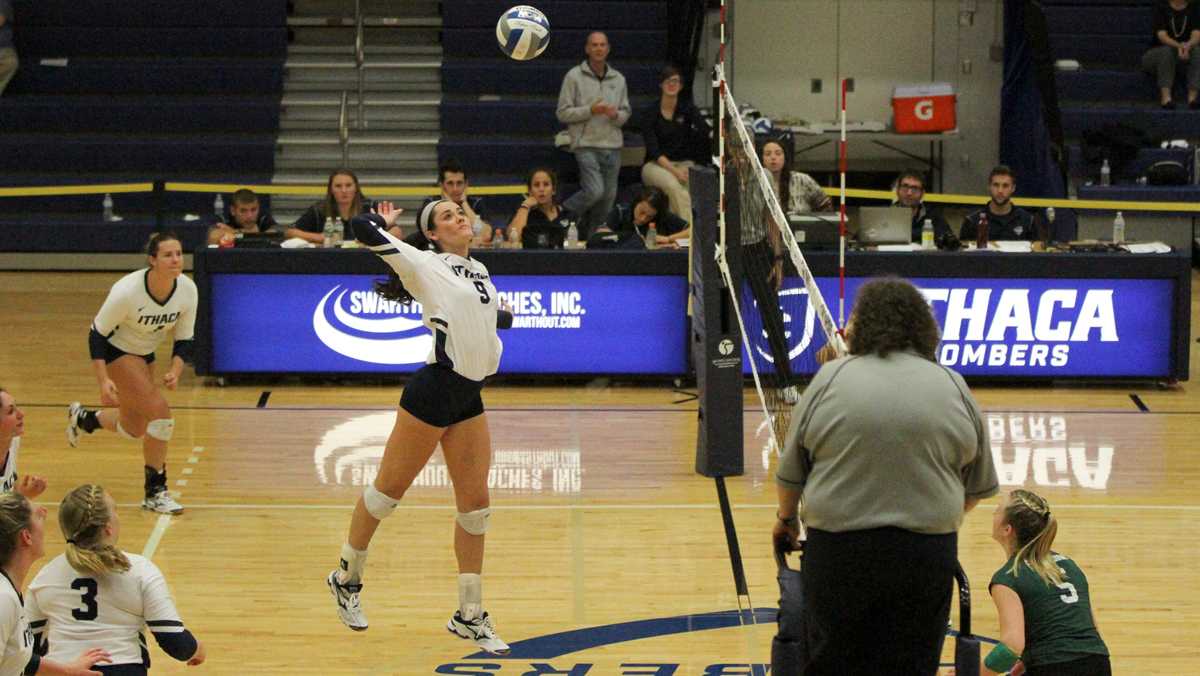 The Ithaca College volleyball team welcomed Skidmore College to Ben Light Gymnasium in the Bombers’ first game of the Liberty League Tournament. Hosting the tournament for the first time in school history, the Blue and Gold defeated Skidmore College in a three-set sweep of 25–19, 25–17, 25–18.

“The numbers were actually really good for us. I thought Skidmore was good, we knew they would be good,” head coach Johan Dulfer said. “Every fifty-fifty point went their way tonight, which is why I think it was so tight, but when it really mattered … we found another gear.”

Each set remained close in the match, but the Blue and Gold found a way to keep their composure when it mattered and pull away in the end of each set. The Bombers had a combined 51 kills, while Skidmore failed to capitalize on their chances recording 27 combined kills.

Freshman inside/outside hitter Reagan Stone and senior outside hitter Joelle Goldstein paved the path for a Blue and Gold victory. Stone recorded 16 kills on the night also boasting an impressive .519 hitting percentage, while Goldstein provided the team with 14 kills.

“I think we played an overall great team effort tonight, every single person contributed to that,” Goldstein said. “We just had the mindset that we were not going to lose, we have the goal of winning a championship and we are going after it.”

Tomorrow will be an emotional affair for Goldstein who might be playing in the last volleyball game of her collegiate career.

“It’s my last season so every game is important to me, but I really want to go out with a Liberty League Championship, especially the first one in program history,” Goldstein said. “That would mean a lot to me knowing I contributed to that, so I just think this group wants to go as far as they can and make history.”

History runs deep in the championship game against Clarkson tomorrow, as Dulfer will be coaching against a Clarkson team where he was the head coach for 10 years.

“I don’t think that will ever get easy, but I think my team is just that much ready for them,” Dulfer said. “We know them very well obviously, so I think they match up great against us and we will be ready for them.”

The Bombers return to action at 4 p.m. Nov. 4 as Ithaca hosts Clarkson in the Liberty League Championship match at Ben Light Gymnasium.