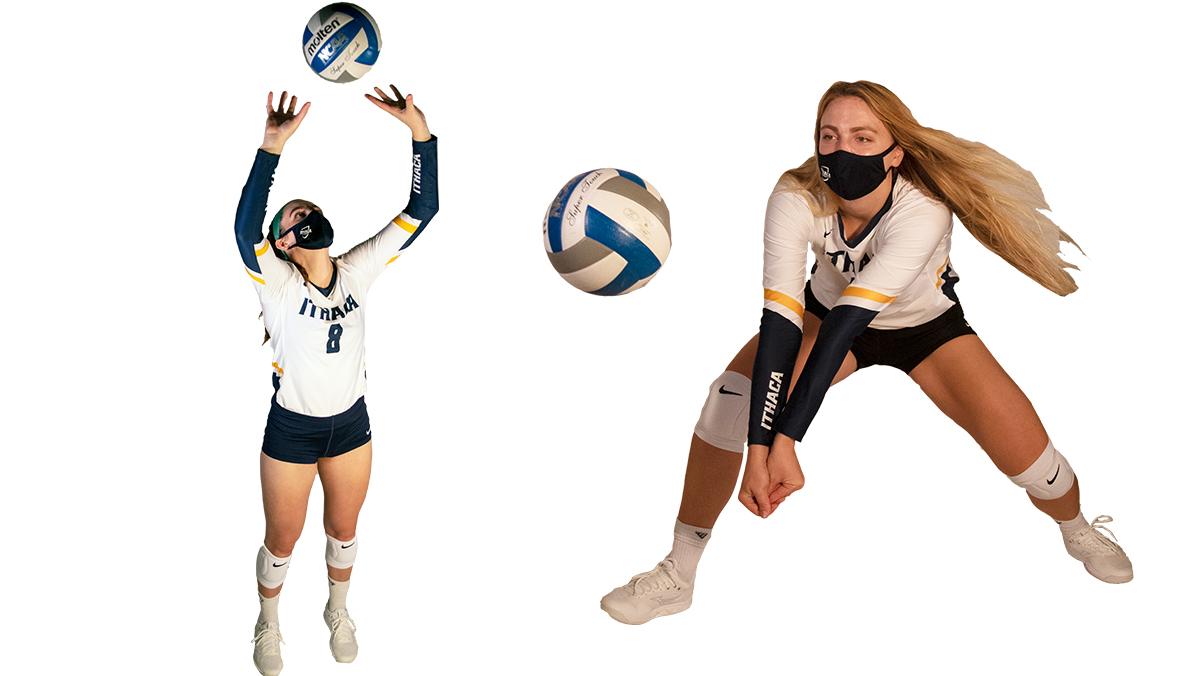 With the regular season right around the corner, the Ithaca College volleyball team is ready and eager to get back on the court.

The Bombers were held out of action last fall due to the cancellation of their season due to the COVID-19 pandemic, and its last match was a loss to Liberty League rival Clarkson University in the third round of the NCAA Tournament in 2019. However, head coach Johan Dulfer was able to get a sneak peek of what his team brings to the table through practices and scrimmages last spring against Rochester Institute of Technology and University of Rochester. Although Dulfer said it is too early to tell for sure, he believes the team’s depth of talent is stronger than ever.

“This is probably the deepest roster I’ve ever coached in 17 years of being a head coach,” Dulfer said. “We’re not going to depend on one or two arms, it’s going to be much more spread out in terms of who takes care of what. I think that’s really going to be hard to guess how we’re going to hurt you. I really look forward to seeing how everyone rotates because we should have very few weaknesses.”

The South Hill squad will face some challenging competition early in its season playing Johns Hopkins University, Juniata College and Colorado College. Dulfer said the team typically fills its schedule with difficult opponents, but this year’s schedule is as strong as any it has played.

“Those are going to be some really great matches to be a part of,” Dulfer said. “[Our schedule] is probably stronger than anything we’ve done in the past … It’s been two years and we just don’t know how good other teams are going to be, and they’re also going to have lost players and have some issues.”

Regardless of who the team has to play, the players are excited to have some regular season competition once again. Senior Jaelyn Hershberger, one of the team’s three captains, said she believes the Bombers have a lot of potential this year and are ready to prove it.

“The energy for the team is pretty exciting,” Hershberger said. “I just feel like we have a great team this year and I’m really looking forward to being able to play normally for the first time in so long. We’re going to have faster passing, faster sets and beat the blocks.”

Without a season last year, the team essentially has two incoming recruiting classes. Captain junior Jennifer Pitts said the team was able to evaluate its three sophomores during the practices and scrimmages that took place last spring, and she has also been impressed by this year’s class of incoming freshmen.

“We have a huge focus on mindfulness and mental health on our team,” Pitts said. “I would say the ultimate goal is obviously a national championship, and I think that our team is capable. But at the same time, I wouldn’t say that if we don’t make it there it’s an unsuccessful season. I think that a successful season would be coming together as a team, building each other up, learning from our mistakes, and working together to get as far as we can.”

Even though the players are confident as a team, it is tough to put expectations on themselves this early. Hershberger said that out of the gate, the team wants to see strong effort consistently and then build from there.

“We’re always looking to compete at a high level and continually gain momentum towards the NCAA Tournament,” Hershberger said. “Once and if we get there, then just taking it game by game, looking at the game in front of us instead of looking ahead.”

Although no one wants to look ahead, Dulfer said the rematch with Clarkson University looms large. The Bombers went 6-1 in the regular season against Liberty League opponents in 2019, with its only loss being to the Golden Knights. The Bombers were also defeated by Clarkson in the Liberty League Championship and NCAA Tournament in 2019. With the time off since the team’s last match, Dulfer said the squad has transformed into a more athletic, faster and physical team.

“After a two–year hiatus, I really expect people that haven’t seen us play in a while to want to come back, and people that have seen us play will notice the difference,” Dulfer said. “I hope that we’ve taken that next step, and that would be a huge credit to our team. I think we’re going to have a different brand of volleyball this season.”