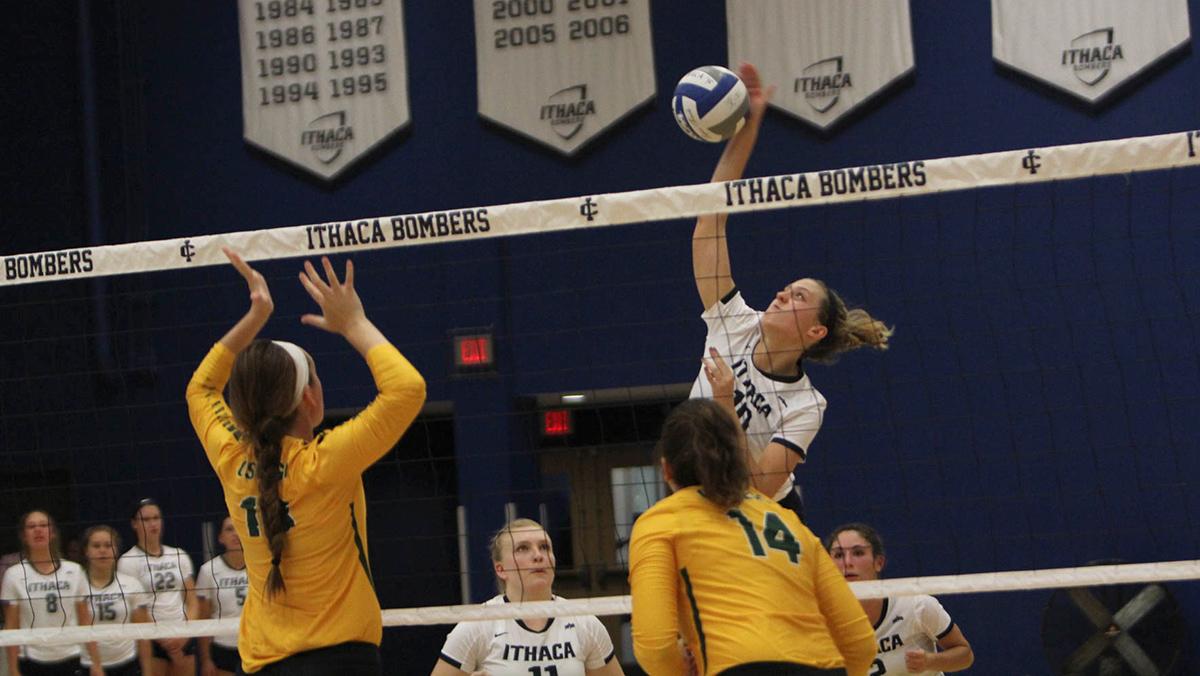 CAITIE IHRIG/THE ITHACAN
Sophomore Katie Evans goes to spike the ball against SUNY Oswego in Ben Light Gymnasium on Sept. 6. The Bombers won in three sets, and improved to 3–2 on the season.
By Maria Bushby — Contributing Writer
Published: September 6, 2016

Neck to neck in the beginning minutes, the Bombers continued to keep a slight lead during the first set. Oswego made a serving error and the Bombers’ energy immediately spiked as the score tied 7–7. The energy remained high for the Bombers as they made a huge leap in score, winning the first set 25–16.

In the third and final set, the Bombers and Lakers were tied at 17 a piece. The Bombers took the next three points, and eventually won the set 25–20.

Freshman Taylor McCarthy served swiftly against Oswego and helped the team reach their win as she delivered four aces and nine kills. The team kept a calm demeanor despite some messy plays, and this proved prudent as they made their way to the win.

McCarthy said the game could have gone better, but the Bombers were still able to pull out a win in the end.

“We have a lot of room for improvement. It’s so early in the season,” McCarthy said.

Goldstein said the Blue and Gold’s win was not lead by an individual player and they played really well together.

“It was definitely a team effort, everyone was in and contributed. We really worked together as a team, and lifted each other up,” Goldstein said.

The Bombers next game will be played at the Buttermaker Tournament hosted by Muhlenberg College. Their first game of the tournament is at 3 p.m. Sept. 9 against the University of Scranton.

CORRECTION: This article originally misidentified the name of the Buttermaker Tournament.

Sports One on One: Junior volleyball player Kayla Gromen