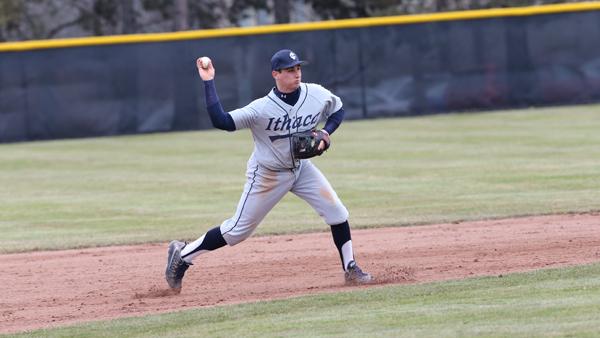 Durst Breneiser/The Ithacan
Junior shortstop Tim Locastro throws out a runner during a 13-inning game against SUNY-Oswego on March 29. Locastro is the second player in as many years to be drafted by a Major League Baseball organization.
By Kristen Gowdy — Staff Writer
Published: April 3, 2013

When the baseball team landed in California for its annual spring break trip, it was at a severe disadvantage. Because of Ithaca’s unpredictable weather conditions, the Bombers had yet to step on a grass field this season.

Before March 25, the Blue and Gold had not practiced on Freeman Field. Instead, they had relied on Ithaca College’s Athletics and Events Center for their workouts. Assistant Coach Frank Fazio said the lack of outdoor experience gave their West Coast opponents an edge

“I certainly think that the teams in California had a big advantage, because they were able to play more games outside [before they played us],” Fazio said. “When we first got out there, we didn’t play as well as we could have, but we adjusted and got better and better.”

Though the Bombers were able to hold their first outdoor practice last week, the team has not been able to play outside consistently yet. The Northeast weather forces the coaching staff to make the daily decision over whether the team will be able to practice on Freeman Field or whether it needs to retreat into Ithaca College’s Athletics and Events Center for its workout.

Junior shortstop Tim Locastro said the team was excited to escape the confines of the A&E Center.

“[Practicing outside] is so much better than being in the A&E Center,” Locastro said. “Being out here really gets us ready for game

Fazio said the monotony of playing indoors every day was tiring for the team.

“When you have the same old routine inside, you get bored,” Fazio said. “It definitely affected our mental approach.”

The team’s options for practice space have opened up since the completion of the Athletics and Events Center. Head Coach George Valesente said the A&E Center has provided an excellent alternative compared to where the team used to practice during poor weather.

“I’ve held full practices in the [Hill Center] before, so the field house for the past two years has been a real plus,” Valesente said.

Valesente said the Athletics and Events Center gives the team much more room to play, and that they can hold much more extensive practices than they ever could in Hill Center.

Even with the increased space, there are several restrictions that come with practicing indoors. Valesente said the team is not able to carry out a full scrimmage for fear of breaking the fragile lighting system.

However, there are several advantages that the Athletics and Events Center offers. Pitchers are able to throw live batting practices, which Valesente said is not possible outside when the weather is too cold.

“When we have live pitchers throw, batting practice is more game-like,” Valesente said. “When we practice outside, we have coaches throw, which is much less beneficial for the hitters.”

Valesente said the unpredictability of the weather and the grass infield are the biggest advantages of practicing outside, because they offer realistic preparation for games. He said the simulation of real-game situations is something that the Athletics and Events Center cannot provide.

When it comes to decision-making, Valesente and his assistant coaches are well accustomed to making last-second changes to the practice schedule and location.

“Baseball coaches are the masters of rescheduling,” Valesente said. “We can go out on a beautiful day and within an hour it could be pouring rain.”

Valesente said even though it has been hard on the team at times, the players have adapted to the constant change.

“The guys have been really good about it,” Valesente said. “They do a great job with adjusting, even though we improvise a lot.”