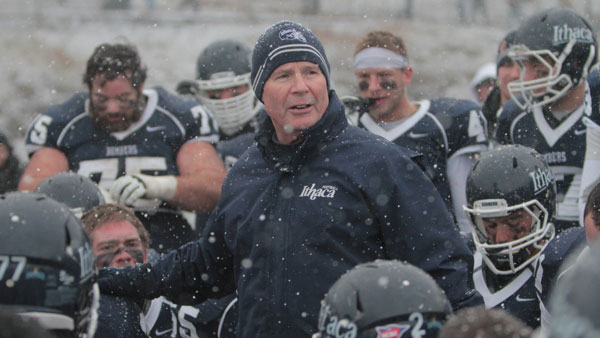 For Mike Welch, the past year has been a roller coaster. The Bomber football head coach underwent heart bypass surgery in October 2012 that forced him to miss the last four games of the 2012 season. Welch returned soon after that season ended and successfully guided the Bombers to a 9–3 record, capturing the Empire 8 championship and earning himself and his staff Empire 8 Coach of the Year honors. He was also named president of the American Football Coaches Association for next year.

Staff Writer Christian Araos sat down with Welch to discuss his emotional year, his new position as president of the AFCA and his future as head coach.

Christian Araos: This calendar year has been up and down for you. How have you changed as a person through both the heart troubles and this season?

Mike Welch: When you lose your health, which in my case was a serious condition, you rethink what your priorities are. I had that opportunity to do it, and one of the things was that you just need to appreciate what you have a lot more than before the surgery. I gained a stronger appreciation for all the things in life, and most of it is just people. I’ve been fortunate to be around some great teams, coaches, and you have your family — [that] certainly is the first priority.

CA: What was your initial thought when you returned to the office for the first time after the surgery?

MW: I was happy to be back. You feel out of it when you can’t do anything. I wasn’t able to do much at all. It was just being able to be active as a coach rather than sitting on the sidelines. That time will come when I no longer coach, and I think it comes to everybody. Right now, I’m still coaching, and I missed it, so I was really excited about being back coaching.

CA: How much have you thought about “sitting on the sidelines” for good?

MW: Not much. That’ll come. I don’t dwell on the future too much.

CA: What does it mean for you and the staff to win both the league and Empire 8 Coach of the Year?

MW: I think it’s an honor. It’s a team award. Players play the game. We didn’t make a tackle or throw a block, so it’s all on the players and their ability to perform, and certainly they need coaching, so it’s a total team and what we did as a team — the honors come, team awards and individual awards — and I really look at it that way.

CA: You’ve been named AFCA president for the upcoming year and have been a board member in years past. What will change for you serving as both coach and president?

MW: We’re very fortunate to have a great executive director in Grant Teaff — the man who runs our operation and provides us with leadership. Board members contribute, and we do. Fortunately, it’s not a tremendous amount of time consumption. It does increase when you become president, but I’ve been a member of the board. Overall, Grant Teaff, being a former AFCA Coach of the Year, he understands what we go through, and he tries to make the time commitment of being a board member as minimal as possible yet trying to be effective.

CA: What responsibilities do you have as president of the AFCA?

MW: A lot of it is the convention and meetings that we have over the course of the year. There’s two or three meetings that we all have to attend, and the president becomes the focal point in terms of running the meetings and making sure they’re operated in the right way. In the convention, there’s a number of activities that the president needs to be a part of, and it’s a matter of preparing, just like a part of anything else, and going and just executing. There are some other things that I am not aware of that I have to attend or do, but the meetings and the convention are the primary objectives.

CA: Having the added work as AFCA president to your head-coaching duties can bring some extra stress. Do you think you can handle it after all you’ve been through?

MW: I’m 100 percent back to health. It’s just a matter of making sure I exercise and eat right, and the job continues. The job hasn’t changed much, and there has to be a balance, and I think I’ve done that. I’ve been given full go by my doctor, and I certainly don’t want to go through that again, so I watch what I do. It shouldn’t get in the way at all.