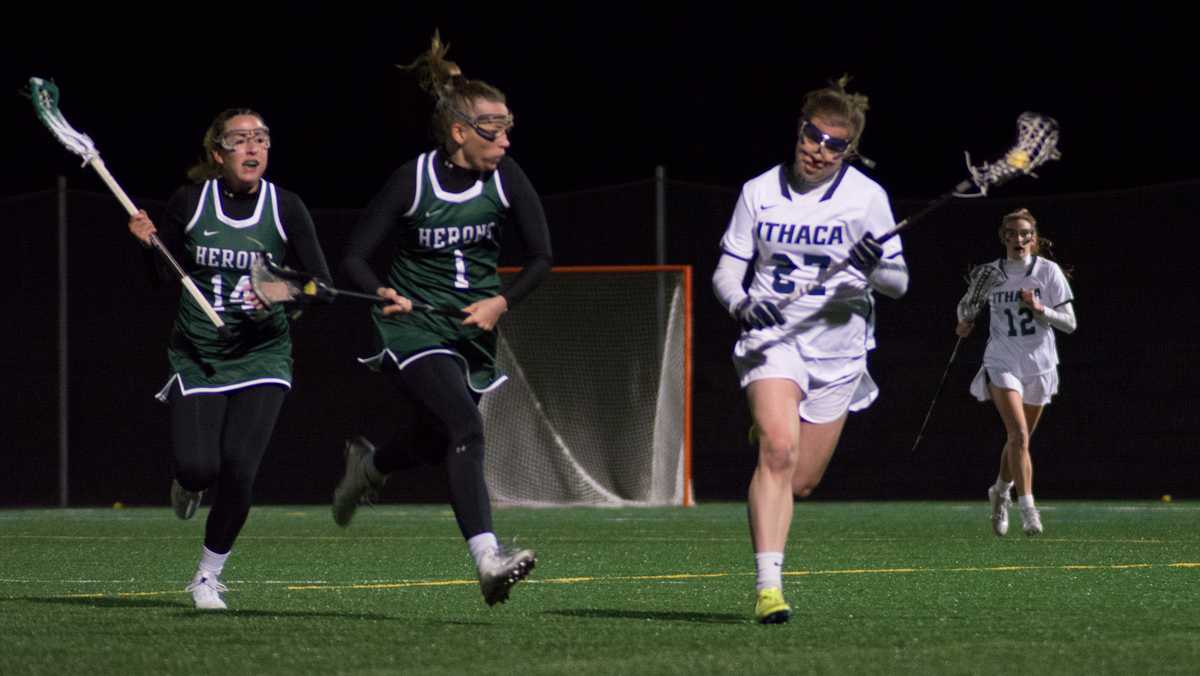 The No. 14 Ithaca College women’s lacrosse team looked to have its game against No. 20 William Smith College on April 11 at Higgins Stadium all wrapped up. That was, at least, until the last minute and a half, when the Herons scored to not only take the lead for the first time, but also the win.

In the end, it did not matter that the Bombers controlled the game for 58 minutes. All that will be remembered is the 9–8 loss now reflected in the record books.

“I think we lost our composure a bit,” freshman defender Molly Nodiff said. “If we had stuck together as a team like we normally do – we are really strong that way – we would have come out with the win.”

The Bombers had sat in the stands to watch the men’s lacrosse team lose to Rochester Institute of Technology, the best team in the nation, prior to the start of their game. However, unlike the men, the women came out with energy and poise and took the early 2–0 lead thanks to a pair of goals from freshman midfielder Indira Varma.

At the half, the Bombers were up 6–2, but the Herons scored two straight to make it a two-goal lead with 20 minutes remaining. It was still a two-goal game later in the second when Melissa Moore, William Smith senior midfielder, scored two goals back-to-back to tied the game up at eight apiece.

With the game on the line, the Bombers struggled to keep up with the Herons offense, who were able to send one into the back of the net with 1:12 remaining. The Bombers won the resounding faceoff, but a turnover gave the Herons the ball and control of the game as the seconds ticked off.

“They played really tough defense,” head coach Karrie Moore said. “I know 9–8 doesn’t seem like it, but I think for our team, 9–8 is a pretty good defensive battle. I thought both goalies made some crazy saves. It was just a good battle. It was one of those games that you wish went the other way, but at the same time you’re competing, and that’s why you do this.”

The Bombers held the Herons to five shots on goal in the first half and 12 in the second and now move to 8–4 overall and 5–1 in the Liberty League. They have faced ranked teams five times this season but have only been able to net one victory.

Despite the loss, Moore said that the team is stronger than it was in its last game.

“I thought our defense just played really awesome tonight,” Moore said. “You spend a lot of time practicing and you hope that it matters. We made a lot of improvements in the things we were trying to improve on this week, so I was happy to see that.”

The South Hill squad’s next battle will be against Rensselaer Polytechnic Institute at noon on April 14 at Higgins Stadium.