Women’s basketball advances to second round of NCAA Championships 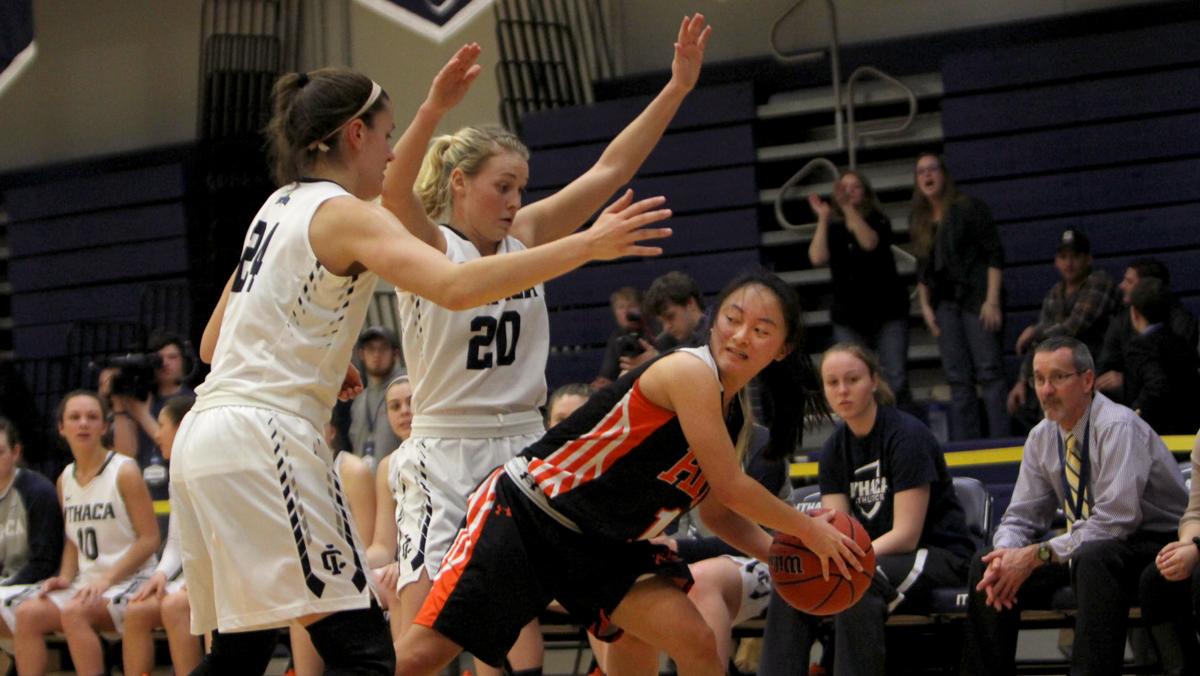 In front of a packed Ben Light Gymnasium, the Ithaca College women’s basketball team put on a show for its fans. After a tense fourth quarter, the Bombers defeated the Rochester Institute of Technology 65–62 March 3 to advance to the second round of the NCAA Championships.

This was the Bombers 14th straight win and 12th straight at home. Head coach Dan Raymond said the players have worked hard for their success this season.

“So much of what we’ve accomplished this year, it really all goes to them,” he said. “They’ve really bought into each other and playing for each other.”

The Tigers got on the board first two minutes into the game with a layup by sophomore guard Cori Okada. The Bombers responded in less than a minute, and after a steal by senior guard Ali Ricchitui, drove the ball down court for two points.

The Blue and Gold then notched down three 3-pointers, two by junior guard Jordan Beers and one by Ricchitui, before the Tigers called a timeout. After three minutes of missed shot, the Bombers saw their nine point lead diminish to just two points.

The Bombers led the Tigers 12–11 at the end of the first quarter. Senior forward Shayna Gaskins notched her first points of the game in the second quarter, followed by a 3-pointer by sophomore guard Meghan Pickell to extend the Bomber’s lead to 17–11 with just over eight minutes remaining in the second quarter.

After a foul called on junior guard Erin Woop, the Tigers took their second lead of the game 21–19. With about three minutes remaining, Beers and Ricchiuti both knocked down 3-pointers to give the Blue and Gold a 29–24 lead. Beers led the Bombers with nine points, followed by Ricchitui with eight. Okada led the Tigers with 13 points at the end of the first half.

The Tigers got on the board first in the second half. Yacovoni scored the first points of the half for the Bombers, but the Tigers went on a 9-point run to take a 41–35 lead, their largest of the night. The Bombers caught up, and were behind 41–39 with three minutes remaining in the third quarter.

The Bombers and Tigers continued to go back and forth during the fourth quarter. With just under two minutes remaining, the South Hill squad had a 56–53 advantage. The South Hill squad held onto the lead for the rest of the game, and went on to win 65–62.

Raymond said overall, he thought the team put together a solid performance.

“I thought we did a really good job of doing what we needed to do,” Raymond said. “[We had] a couple mistakes obviously. But the great thing is we recovered from them, and that’s the most important thing that we did.”

The Bombers defeated SUNY New Paltz 78–50 Jan. 10, but since then the Hawks have turned their season around.

“When we played Ithaca last time, we obviously didn’t play very well,” SUNY New Paltz senior guard Kit Small said. “I don’t even know how much they beat us by. We are a completely different team. We have grown a lot since then. Ithaca is a great team, they pressure a lot … Everyone at this point is going to be good.”

Senior forward Erin Ferguson said they need to treat the next game like every other game, and focus on doing what they need to do to win.

“Everyone is here to play, so we have to come up with our best effort,” she said. “What happened earlier in the season means nothing right now because it’s win or go home.”