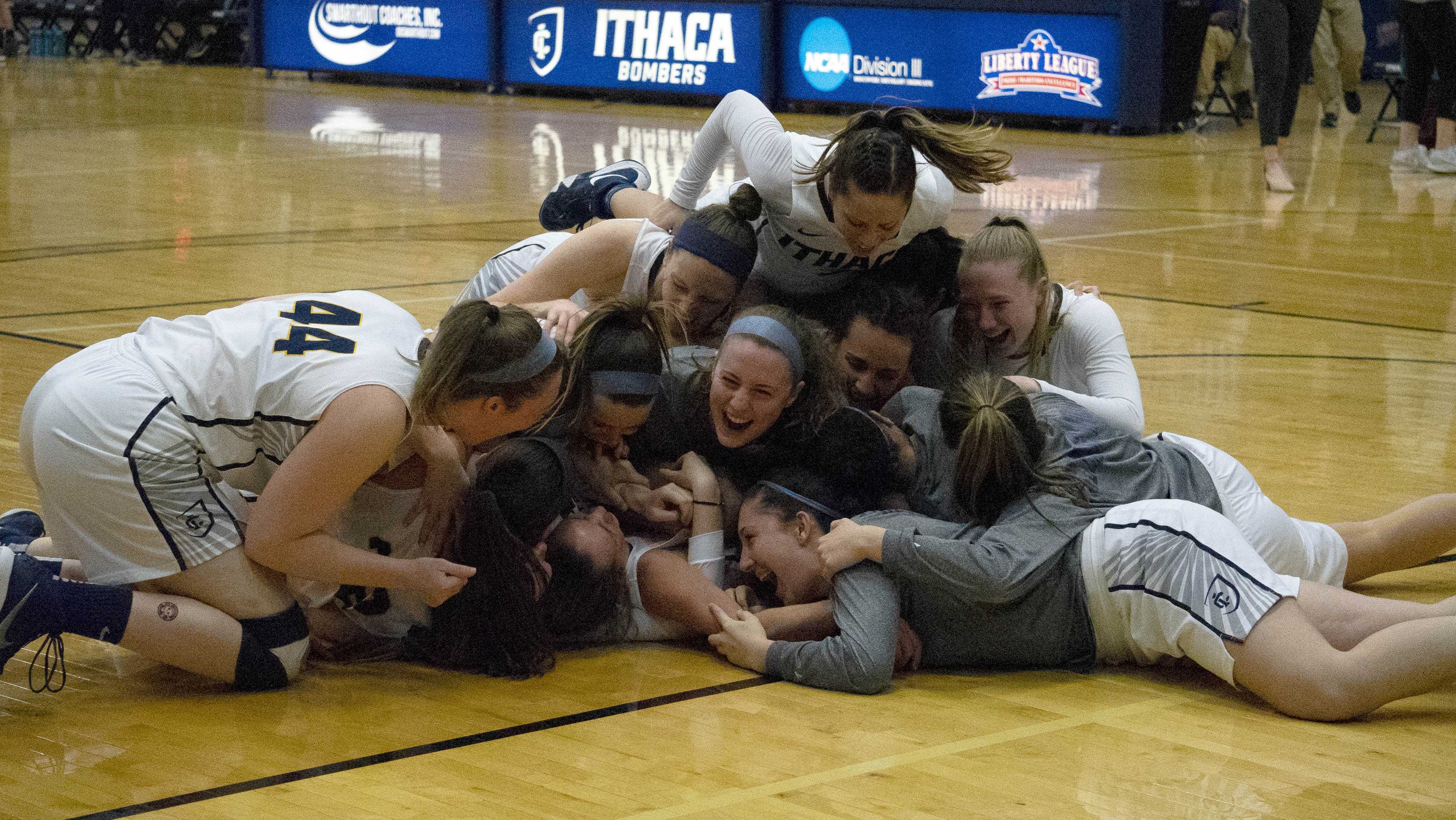 SABRINA CHANG/THE ITHACAN
Members of the Ithaca College women's basketball team pile on top of senior Annie Giannone at the end of overtime after she sank a layup to secure the Bombers' victory over RIT and the team's first-ever Liberty League Championship.
By Emily Adams — Assistant Sports Editor
Published: February 24, 2019

Senior guard Meghan Pickell was named the MVP of the game. Pickell led the scoring for the Bombers with 23 points, making it her first career game with more than 20 points. She also made three 3-pointers and had eight rebounds.

Her biggest MVP moment came with 29 seconds remaining in the fourth quarter. The South Hill squad were down by 3 when Pickell received a pass from senior Annie Giannone on the far left side of the arc. She turned and sank a 3-pointer to tie the score 65–65 and send the game into overtime.

“Honestly it was just kind of blur,” Pickell said. “It all happened so fast but to have that happen is awesome and of course go into overtime and come out with the win.”

Giannone had a stellar day herself, as she netted the last-second layup to give the Bombers the two-point victory. After head coach Dan Raymond called a timeout, the Blue and Gold’s offense wasted no time getting the ball to Giannone in the paint where she sealed the win with 3 seconds on the clock. She also notched seven assists, six rebounds, and three turnovers.

The road to the win was not a smooth one. The South Hill squad got off to a slow start, trailing the Tigers for the entire first half and the majority of the third quarter. They struggled to finish, shooting only 31 percent from the field during the first half.

They also faced a huge challenge in RIT senior guard Cori Okada. Okada was unstoppable on offense, ending the game with 32 points to top her previous season best of 27 against SUNY New Paltz on Nov. 9. She also notched eight rebounds and four assists.

The Bombers came alive in the second half, improving their field goal percentage to 41 percent. Pickell had 100 percent 3-point accuracy on three attempts and scored 21 of her 23 points. With just under 1:30 to go in the third quarter, the Bombers took their first lead but it was a constant back and forth until the final buzzer. The lead changed seven times during the remainder of the game.

The Bombers earned their redemption from last season when they lost to the Tigers 61–68 in the Liberty League semi-final. They were evenly matched with RIT all season, defeating them 77–52 Jan. 8 then losing 52–64 Feb. 5 at home. Raymond said that the team’s strong roster helped them to come out on top in the grueling contest. The Bombers had ten different players score points, while the Tigers had only five.

“The thing with RIT is they’re so talented but they’re not very deep so you never know what they’re going to throw at you,” Raymond said. “[At halftime] we as a coaching staff made a decision to start subbing every three minutes, because our players were tired and their players were tired but we have our depth so we utilized it.”

The Bombers have had an excellent season so far as they improve to 22–5 with the win. Pickell said that the championship was something that the entire senior class has been striving for all year.

“Everyone knows that it’s a huge rivalry, us and RIT, and it always gets us amped and gets us going,” she said. “We know it’s going to be a battle but we worked our hardest and came out on top. Being an senior and doing it with the other seniors who are my best friends is just awesome.”

The Bombers will compete in the first round of the NCAA Tournament on March 1. The location and opponent for the game will be announced at a later date.