Women’s basketball looks to get back to the NCAAs 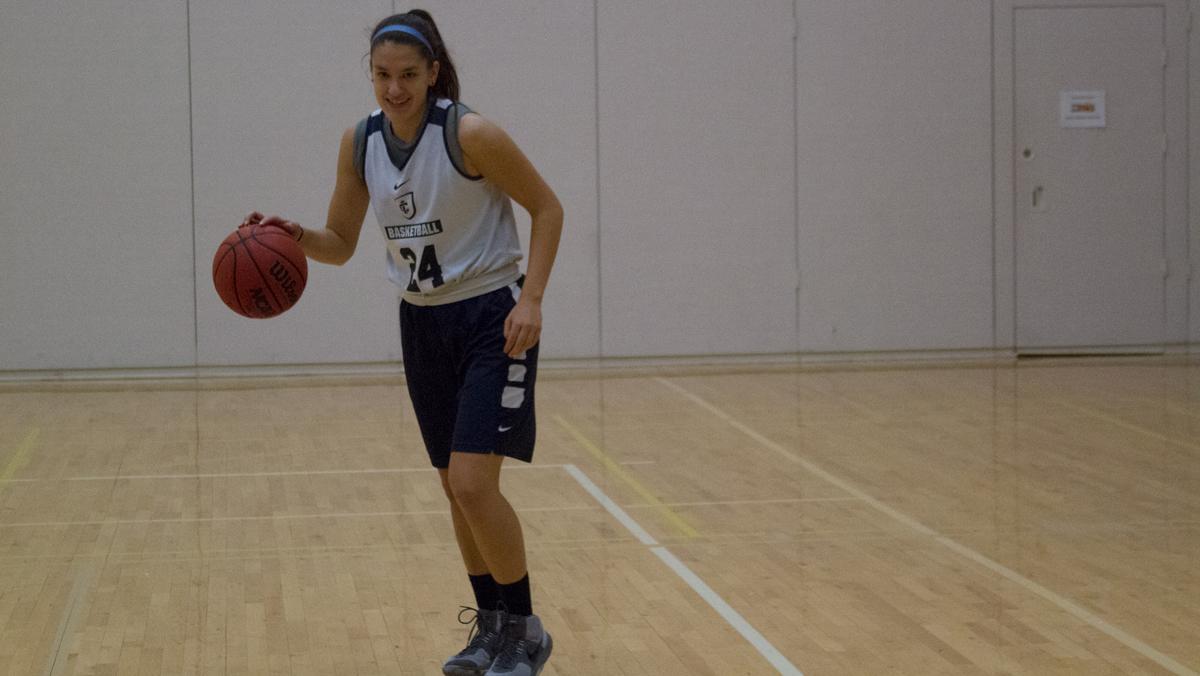 The Ithaca College women’s basketball team looks to build on last year’s success and make another playoff run. Last year’s team posted a 25–4 record, which it translated into an Empire 8 championship and NCAA appearance.

The Bombers will try to maintain that success as they move to a new conference, with this being their inaugural season of the Liberty League.

The Blue and Gold will need to figure out a way to make up for the production they lost with last year’s graduating class. Replacing Ali Ricchiuti, who was the team’s leading scorer and second in assists last season, will be a difficult task.

Dan Raymond, who is entering his 18th season as the Bombers’ head coach, said he knows replacing Ricchiuti will take the entire team.

“There’s no one player that’s going to fill the role that she played for us,” Raymond said.

The Blue and Gold are not without options to replace Ricchiuti. Senior guard Jordan Beers will try to lead the team in scoring after finishing second last season, as well as reaching double–digit points in 10 of her last 13 contests.

Senior guard Erin Woop struggled to consistently score last season but made up for it by leading the team in assists per game, and will look to make up for Ricchiuti’s skills as a floor general.

“I was lucky to have been given the opportunity to play beside her for three years and learn from her on and off the court,” Woop said. “We are going to miss her, as she was a huge part of our team, but we are really excited for our girls to step up and fill her role.”

The departures of Erin Ferguson ’17 and Shayna Gaskins ’17 will also leave the Empire 8 Champions without their top rebounder and sixth man from last season, but Raymond said the team is prepared.

“The loss of Shayna and Erin Ferguson last year, that’s a big hole that we have to fill, too,” Raymond said. “We have Cassidy O’Malley, the expectations for her are going to be significant this year, a huge change in her role, and then Abbi Field is our first year, who’s a true post player, and she’s going to have to contribute in a big way right away.”

Woop, along with Julie Yacovoni, senior forward and guard, will add more leadership to the team. Yacovoni will serve as their main defense stopper, coming off a season that left her second in both blocks and steals in the conference.

“Having such a large number of veteran players returning, that’s where the significant amount of leadership has to come from,” Raymond said.

Last season, the Bombers faced six Liberty League opponents and were victorious in every matchup, including a win over Liberty League champions Rochester Institute of Technology Tigers in the NCAA tournament.

Though the Blue and Gold had success against their now-conference opponents last season, the team is not thinking championship-or-bust.

“For us, it’s an objective of making sure that each day, we’re accomplishing something so that we can keep moving forward,” Raymond said. “That’s truly our goal — to be playing our best basketball by the end of February.”

Beers said that it is the team’s desire to take things one day at a time.

“Obviously, it was incredible to host NCAAs in front of our home crowd, and we would love to get that opportunity again, but none of that will happen if we overlook a single game this season,” she said. “Each game is a championship for us. We want to leave each game 1–0 on the day.”

The Bombers begin their season against Fairleigh Dickinson University on Nov. 17 as a part of the Cortland Classic, with their first home game coming the next day against Montclair State University. The South Hill squad will open up conference play Dec. 1 with a battle at Vassar College.

Women’s basketball advances to second round of NCAA Championships