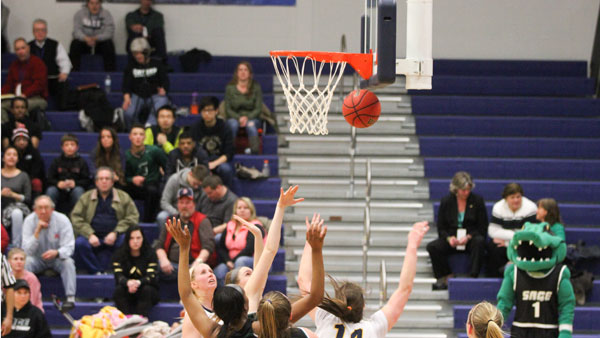 Brian Pulling/The Ithacan
Several players attempt to secure the rebound during the first round of the NCAA Division III Tournament between Ithaca College and The Sage Colleges.
By Mark Warren — Staff Writer
Published: March 19, 2014

Junior guard Sam Klie received the inbound pass and rushed down the floor, trailing 61–59 to Tufts University with seven seconds remaining during the Elite 8 Tournament game on March 15. She passed to freshman guard Ali Ricchiuti, who raced up the court and attempted a contested reverse layup, which would have sent the Bombers to overtime in the Elite 8 game.

Instead, the ball rolled off the rim and fell a few inches away from the hoop, giving the now 30–1 Jumbos another victory and handing the women’s basketball team the loss to end its season. Ricchiuti’s four teammates on the court quickly came to her side and consoled her after narrowly missing the last shot of the game.

Despite the loss to Tufts, the Blue and Gold had an unforgettable season, finishing with a 26–5 record after playing in the first NCAA Elite 8 game in the program’s 47-year history. The win against Amherst College on March 14 was also the first Sweet 16 round win in the team’s history.

Head coach Dan Raymond said the team’s Sweet 16 victory against Amherst was an important milestone for the program.

After beating Amherst, the Blue and Gold matched up with the Jumbos, who entered the game with an 18–1 record on their home court. After the Bombers lost, Tufts senior forward Ali Rocchi said the Bombers gave her team a tough battle.

“They’re a great team, and we knew that coming in,” she said. “Elite 8 teams are not going to give you easy games. It was going to be a fight, and they fought to the very end.”

And that’s exactly what the Bombers did. They made five 3-point shots in the final four minutes of the game, which kept the squad within one point of Tufts with eight seconds left. Senior guard Mary Kate Tierney, who was 10 feet beyond the arc with two Tufts defenders in her face, hit a 3-pointer to keep the Bombers alive. Just before Tierney’s shot, senior forward Jenn Escobido made only her third 3-pointer of the season with 19 seconds left and just before the shot clock expired.

Jumbos head coach Carla Berube echoed Rocchi and said the Bombers’ 3-point shooting was an important factor in the final minutes that nearly gave her team more than it could handle.

“I give a lot of credit to Ithaca,” she said. “They made some huge shots, they have an unbelievable senior class that really stepped up for them, and it was a grind.”

Senior guard and second-team All-Empire 8 selection Kathryn Campbell led the Bombers in points with 21. Tierney netted 16 points to go along with her nine assists and six rebounds, while Escobido had nine points and eight rebounds.

Tierney, Campbell and Escobido were the top three leading scorers for the Bombers this season. Fellow senior Elisabeth Wentlent was also an important player, averaging 3.3 points and 1.8 assists per game. During the past four years, the Blue and Gold have won three straight Empire 8 Conference Championships and have achieved three Sweet 16 appearances and this one Elite 8 appearance with an overall record of 97–20.

The Bombers’ 26 wins this season were the second most in program history, and their 18-game winning streak from Jan. 10 to March 14 set the college’s record.

Tierney was named to the D3Hoops.com All-East Region Second Team after the Bombers were ousted from the tournament. An All-Empire 8 First-Team selection, she led the Bombers in seven different individual categories this year. She led the team with 13.7 points per game, 8.5 rebounds per game, 122 assists, 48 steals, 31 blocks, a 3-point percentage of 43.1 and a free throw percentage of 86.2. She also recorded 12 double-doubles in 2013–14 and added a triple-double of 14 points, 11 rebounds and 10 assists in the Bombers’ win against Amherst.

Tierney said her individual success was secondary to what her team was able to accomplish this season with its historic Sweet 16 win.

“Honestly, [those things] are great, but I’m just more happy that we could get that win and move on to the Elite 8,” she said. “That was something we’ve been working for since day one, and anything I could do to help us get there was something I was attempting to do.”