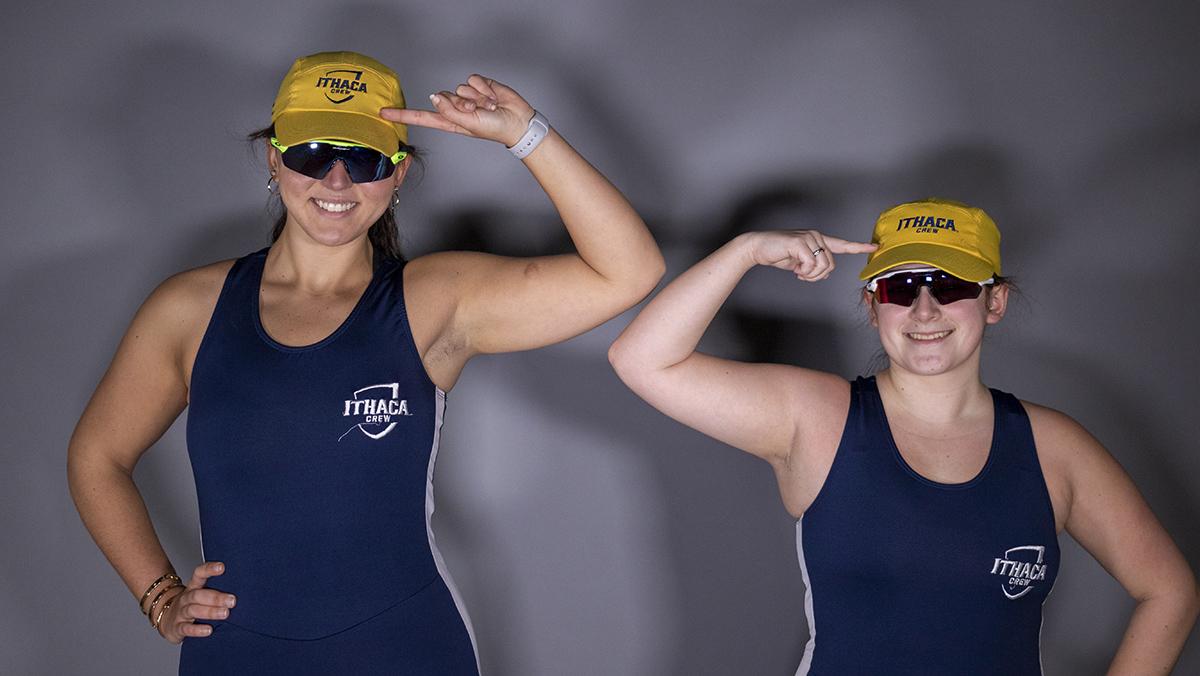 After winning the Liberty League Championship and finishing third at the NCAA Championships last May, the Ithaca College women’s crew team has high expectations for itself this season.

“The team’s goal is to make it back to NCAA’s and to rank better than we did last year there,” graduate student Michele Hyland said.

Six athletes who were a part of the boat that took home bronze in the 2021 NCAA Championships are returning as Bombers this season. Those dreams are not out of reach as graduate students Breck Snow and Devi de Oliveira; seniors Emily Lighthall, Laura Trainor and Edie McRoberts; and junior Brenna Hanratty all competed in the NCAA Championship race in Sarasota, Florida, last season and hope to return in May.

After finishing the season as the third-ranked Division III school in the country by the Collegiate Rowing Coaches Association, senior captain Izzy Ozkurt said the team is ready to prove its worth in 2022.

“We are still riding high off that season,” Ozkurt said. “But we want to showcase all of the hard work this team has put in during the fall season and over the winter.”

Along with the team’s successful season, two Bombers received All-American honors for their efforts during the 2021 campaign. Libby Ryan ’21 was selected as a First-Team All-American in the 2019–20 season and graduate student Allison Arndt was named to the Second Team.

Hyland said the team will look to build on this success and is eager for the season to get underway.

“We’re really pushing ourselves, we can’t wait to get back on the water,” Hyland added.

The college’s women’s sculling team competed in three races in the fall, including the Head of the Charles Regatta in Boston, Massachusetts, on Oct. 23 and 24, finishing seventh place.

To fill the spots on the varsity eight boat, the team is looking toward Hyland, Ozkurt, Arndt, junior Taylor Volmrich and senior Dania Bogdanovic to step up. But head coach Becky Robinson said “seats are open to anyone who puts the work in,” including promising freshman Maggie Farber.

The most anticipated races this season, Robinson said, are the championship races, including the New York State Championships on April 23, the Liberty League Championship on April 29 in Saratoga Springs, New York, the National Invitational Rowing Championships [NIRC] on May 8 in Worcester, Massachusetts, and the NCAA Regatta from May 27 to 29 in Sarasota, Florida.

Ozkurt said she is most excited for the Liberty League Championship because it helps the team focus as it begins postseason play. The Bombers have finished first in the event in each of the last three seasons, excluding the 2020 season that was canceled as a result of the COVID-19 pandemic.

“Well, not to brag, but we usually win that one,” Ozkurt said. “But it also shifts our mindsets from just having fun to ‘we need to work hard, we are here to win a national championship.’”

As a captain, Ozkurt tries to motivate and encourage her teammates. She said she believes her motivation and mentoring really helps her younger teammates.

“A lot of the time they are surprised at how far they can push their bodies,” Ozkurt said. “They unlock something in themselves they didn’t know they had.”

Hyland said she is looking forward to returning to competition this spring and is happy that the underclassmen will get the opportunity to compete in a traditional slate of meets.

“This year is going to be really special, it’s like a redemption year,” Hyland said. “Some of us [graduate students] are using our extra year of eligibility. This is the first full season for the juniors, sophomores and freshmen because of COVID[-19].”

Ozkurt said she has become accustomed to the pandemic affecting her sport and is cautiously optimistic about the idea of once again having a typical season.

“Having this normality this season feels weird,” Ozkurt said. “I’m nervous that at any moment, it can all be taken away again.”

However, Robinson said that she hopes this is the end of the COVID-19 pandemic interfering with competition. She said the team has not gotten a chance to face all of its usual opponents because of it, so it is looking to get back to that.

“Traditionally the biggest competition within the Liberty League has been [Rochester Institute of Technology] and Hobart [College],” Robinson said. “But the University of Rochester has a new coach this year, so they might be bringing something.”

Ozkurt said the Bombers’ toughest opponent outside of the Liberty League this year will be Bates College. The Bobcats have won four consecutive national championships. The two teams will meet at the National Invitational Rowing Championship and the NCAA Regatta.

The Bombers will kick off their season at the Cayuga Duels against William Smith College, Canisius College and Johnson & Wales University April 2 at the Cayuga Inlet.

Women’s crew team rows for each other and NCAA title