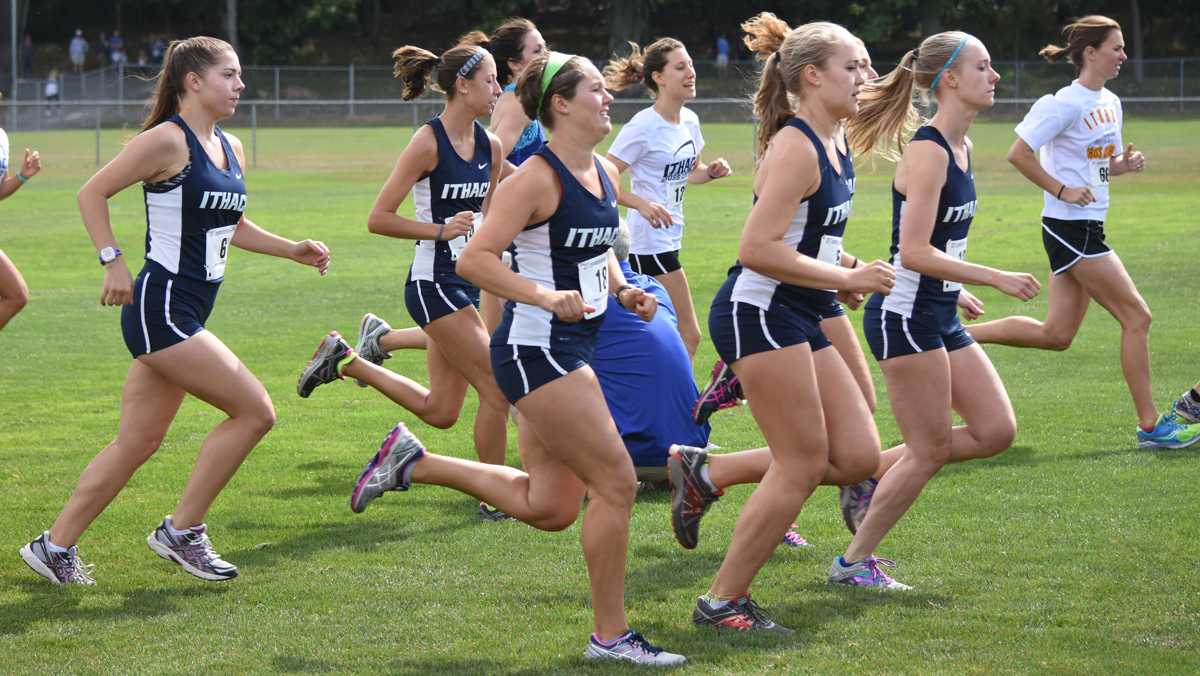 While some runners are having the best finishes of their careers, the Ithaca College women’s cross-country team has fallen in the national rankings following injuries to four of the team’s top eight runners.

Senior Taryn Cordani is leading the South Hill squad. Cordani, who was All-American during the 2016 season, has dominated this season, finishing in first place in the 6k at the Williams Purple Valley Invite with a time of 21:35.5. Cordani then finished 10th at the Paul Short Run, which was the best time out of any Division III runner. She had a time of 20:13.6, which is her career best.

Head coach Erin Dinan said that injuries this season have caused the team to not place as well as they hoped. Top runners such as seniors Denise Ibarra and Sierra Grazia were injured in the beginning of the season, and sophomore Annie Morrison is still out with an injury.

“Once everyone is in their spot and fully healthy, we have potential to be a top-10 team at nationals,” Dinan said. “As long as the team stays focused, there is no doubt the team will improve.”

Last season, the Bombers placed 11th in the NCAA Championships, putting up a score of 384 points, their best since 2005.

“The girls were impressed with what they did, but they are even more excited for getting back this year,” Dinan said. “Everyone is determined to get back.”

Cordani said the team is hoping to stay on the national scene as runners return from injuries.

“With everyone coming back from injury now, this is the first time we have our top eight runners,” Cordani said. “Not only do we think we can reach nationals, but we can definitely get top five in the country.”

Dinan said she is making sure that the team is healthy and prepared for the regional competition by not allowing the athletes who have been injured to participate in every practice and race.

Ibarra competed in her first race of the season Sept. 29 after battling a hamstring injury. She ran a 22:28.1 at the Paul Short Run, finishing 260th out of 369 runners, the second–best time for the Blue and Gold.

At the Williams Purple Valley Invite on Sept. 23, Grazia finished 24th and second–best among the college’s runners. Cordani said that Grazia has the ability to be one of the best runners in the country and is a major asset for helping the team get to nationals.

“Sierra Grazia has been working incredibly hard this season,” Cordani said. “She will continue to improve, and I think she can be an All-American contender.”

Sophomore Sarah Rudge ran a time of 25:19.4, placing 121st at the Williams Purple Valley Invite. At the Paul Short Run, she ran a time of 23:47.6, which was her career best. Rudge said that as long as the team continues to bring positive energy to meets, they have a good shot at making nationals again.

“There is so much excitement and energy going around on our team right now,” Rudge said. “We are all really focused on getting back to nationals while having fun at the same time. If we are having fun, nothing can go wrong.”

The goals for the team are set high this season, but Cordani said that this is the year they can make the top five. She emphasized how close the team was and how unified it is in accomplishing its aspirations for this season.

“We are a close-knit group, and we are all buying into where we want to go,” Cordani said. “The rankings don’t even show what we can do. Everyone is working hard to achieve our goal. We want to go back and make the podium at nationals.”

Women’s cross-country looks to get back to nationals

Cross-country places in the top 15 out of 42 teams