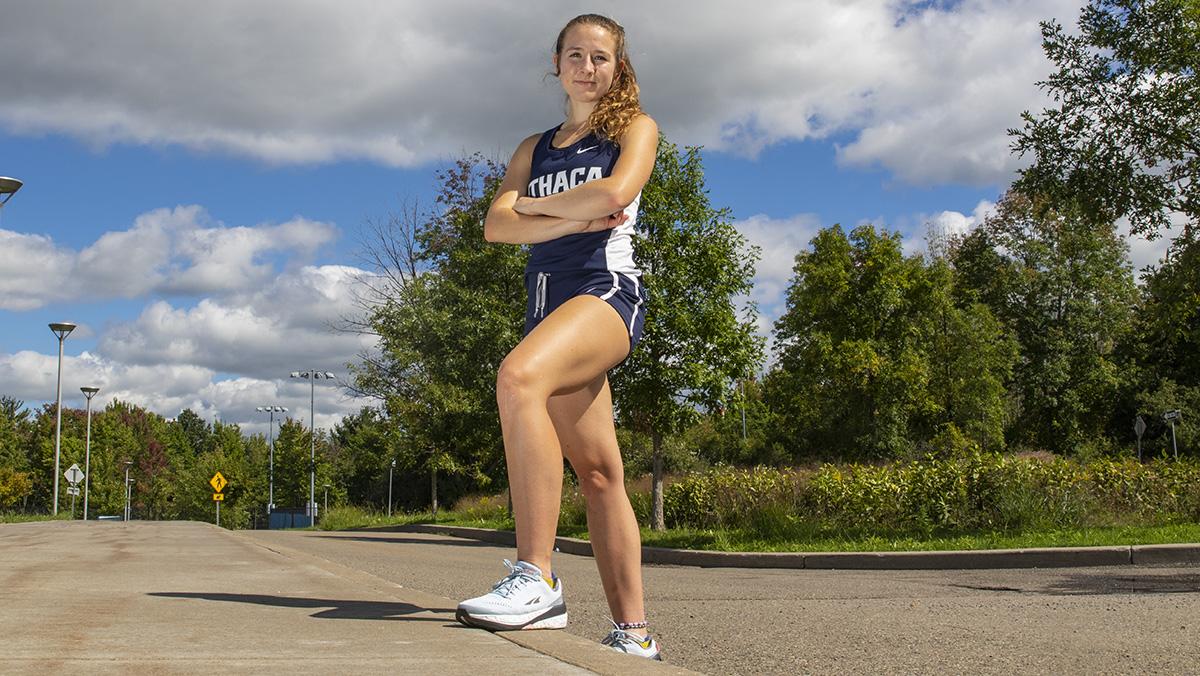 Ash Bailot/The Ithacan
Senior Isabel Johnston was cut from the Ithaca College women’s cross-country team her sophomore year but is now a captain of the team.
By Eli Fishman — Contributing writer
Published: September 23, 2021

Ithaca College senior Isabel Johnston, captain of the college’s women’s cross–country team, picked up running in her senior year of high school. With minimal experience, she had little to no intention of running at the collegiate level, but when she toured the college, a track meet was occurring at the Athletic and Events Center. She was fascinated by the race, and Erin Dinan, Ithaca College women’s cross–country head coach, encouraged her to try out for the team in the fall.

“I had pretty much no long-distance experience under my belt, but I liked the sport a lot,” Johnston said. “I tried out, made the team immediately and fell in love.”

Despite finding success on the team, as she began to ramp up the intensity of her workouts and the distances she was running, she found something was physically wrong.

“I was starting to notice shortness of breath when I was racing and working out at high intensities,” Johnston said. “I was passing out after races and having a hard time finishing.”

Johnston was diagnosed with a laryngeal dysfunction, meaning her vocal cords were blocking her breathing. She continued training before the Fall 2019 season to be ready, using an inhaler and undergoing speech therapy to help loosen her vocal cords, but during tryouts, her breathing problems still impaired her performance; so much so that she was cut from the cross–country team.

“Because of her breathing, she was not able to perform at the level that she’s capable of,” Dinan said. “She just didn’t have the capacity to breathe well.”

Johnston decided to take the whole year off from running and head to yet another specialist to figure out the cause of her struggles. She was told that she had a deviated septum, which blocks the nostrils from properly releasing and taking in air. She underwent surgery in May 2020, which she said gave new life to her athletic career.

Yet another bump in the road occurred when the team’s cross–country season was canceled for Fall 2020 because of the COVID-19 pandemic. Johnston had to wait even longer to put her hard work on display.

In her first return to action, Johnston participated in six meets during the Spring 2021 season for the college’s track and field team, placing in the top five in four of the meets. Though she had success during her freshman year, finishing in the top 10 in the 2019 Colgate Invitational, 2019 Cortland Invite and 2019 Stockton Invite, Johnston felt she rejuvenated her athletic career.

“I was a whole new runner,” Johnston said. “I was getting the hang of what felt like a new body. … I went pretty hard with my summer training going into junior year. I was ready to go, just to see what I could do because I had never really known that before. I’d always been limited in some way.”

After watching her perform on the track and field team, Dinan said Johnston’s comeback was impressive.

“When she came back, I was blown away,” Dinan said. “She knocked off significant times in her performances.”

As a testament to her performance and leadership skills, Johnston was voted as a captain by her teammates for the 2021 cross–country season.

“I’m super grateful and honored that my teammates voted me into this position,” Johnston said. “Especially because I missed out on a lot of time with them, not racing as a sophomore. I think it’s a good position to be in, and it’s going to keep me motivated.”

Johnston has placed inside the top five for the team in its first three meets of the season. Coupled with her strong performances, senior runner Paloma De Monte said she believes Johnston’s work ethic and enthusiasm has a positive impact on her teammates as well.

“Isabel is the most driven person I know,” De Monte said. “She always has a smile on her face and this contagious energy that lifts everyone around her up. She has this gift to connect with people and, in my opinion, makes everyone on the team feel special, in turn, undoubtedly driving motivation and performance within the team.”

De Monte said she believes her teammate’s resiliency can serve as an example to motivate athletes that face adversity.

“I think it goes to show that if you really want something you have the ability to get there,” De Monte said. “It’s because of this that Isabel can speak to her experience and help others who are experiencing setbacks. A minor setback sophomore year is setting her up for a major comeback her senior year.”

Two years after she was cut from the team, Johnston now is one of its captains. Johnston has had to wait to return longer than she expected, but she still knows that she has something to prove over the course of this season.

“It’s an interesting dynamic,” Johnston said. “On one hand, I’m a senior and I’m the captain of a nationally-ranked team. But on the other hand, I’ve only raced two collegiate 6Ks and I’m still getting the hang of racing. … I still feel like a newbie.”

Eli Fishman can be reached at efishman@ithaca.edu

Women’s cross country team ready to run down a championship