Women’s cross country team ready to run down a championship 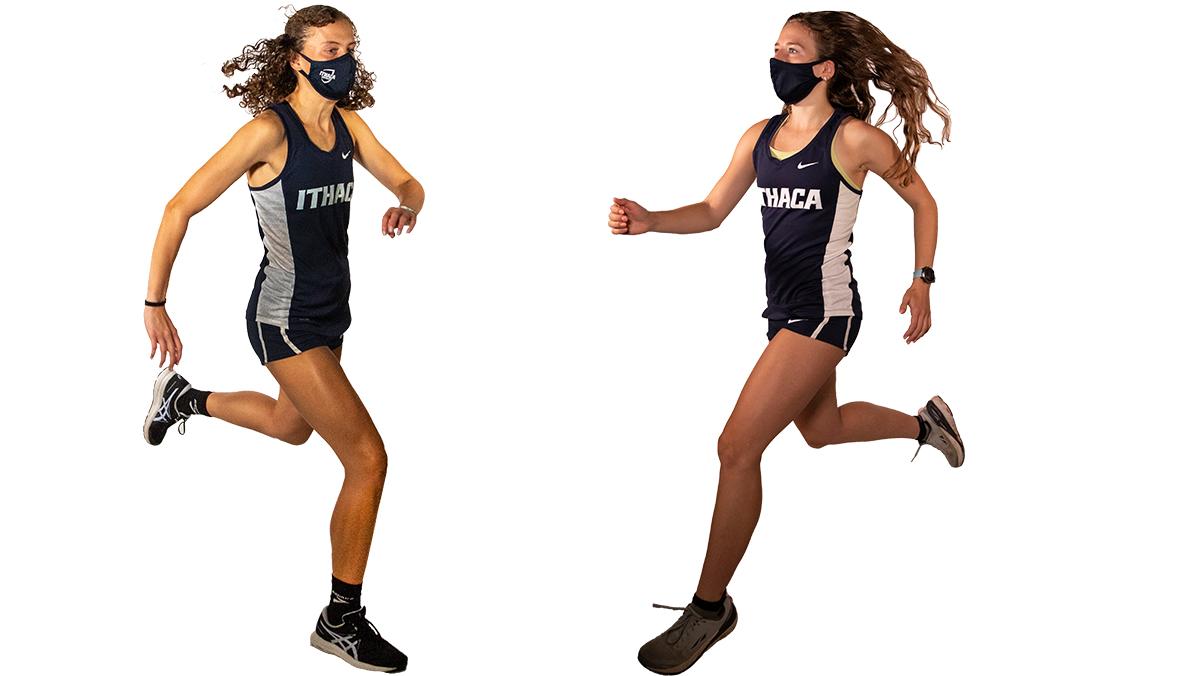 The last time the Ithaca College women’s cross-country team competed, current senior captains Lauren Lobdell and Isabel Johnston were sophomores. Since the squad finished second in the Liberty League in 2019, the COVID-19 pandemic has prevented the Bombers from stepping foot on the race course.

After approximately two years of anticipation, the South Hill squad is eager to make its return to competition with a motivated group of runners. The team arrived on campus in mid-August and promptly began its preparation for the upcoming season.

Lobdell said she has simply enjoyed being around her teammates again and is looking forward to what this year has in store.

“I’m extremely excited,” Lobdell said. “We had a team meeting yesterday and it was just so surreal seeing everyone again after being off for a year.”

The team’s hiatus has put its roster in a unique position, in which several of its runners have transitioned from underclassmen to veterans. Head coach Erin Dinan said she wants her team to approach this season as a new start, because of the circumstances presented by the pandemic.

“With everything that has happened with COVID and how that has impacted our ability to train and compete, I’m hoping that they’re not holding that opportunity to compare themselves to anything because it’s so different,” Dinan said. “So, let’s get that slate wiped clean and say, ‘We’re having a fresh start here and let’s see what we can do,’ and take that pressure off themselves.”

The women’s cross country team is coming off an impressive 2019 season, in which graduate student Parley Hannan won an individual national championship, becoming the first runner to do so in the program’s history.

The team will make its return with several veteran runners, including senior Paloma De Monte. The runner had a solid sophomore campaign for the Bombers, competing in seven meets and setting a personal record by posting a 16:38.5 4k performance at the Hamilton College short course in 2019. Dinan said she believes De Monte will be a key contributor to the squad this fall.

“[She] has proven to have some really strong racing abilities,” Dinan said. “She’s very gritty and determined and I’m excited about her.”

While many runners have been in the program for multiple years, the cancellation of the 2020 season prevented runners from logging miles in collegiate meets. Dinan said juniors like Ava Fowler, Meredith Garrity, Sophia Roy, Rachel Rose and Julia Tomanovich have shown potential in limited competition.

Dinan said she believes that this junior class has the ability to help the team achieve its goals of winning a national championship. However, the coach also said she is entering the season with less knowledge about her junior runners than she has in past seasons.

“I had them their freshman year and then they were gone,” Dinan said. “I think we’re so untapped, unaware about where people are at.”

Lobdell said she anticipates that this fall will be different from her others at the college, because the team has several new faces, including five freshmen. She said she is looking forward to becoming acquainted with the runners who will make their collegiate debuts in 2021.

“It’ll just feel like a really new team since we didn’t get [to meet] all the freshmen from last year,” Lobdell said. “Which I think will be like an adjustment from my previous years, but I think it could be a good transition.”

Johnston said that despite having a season off, the Bombers continued to train throughout the offseason to ensure a smooth transition into this campaign.

“I think one thing that’s nice about cross-country and specifically just distance running is that we were able to do it through the pandemic,” Johnston said. “I think now that we have competition after a long time, excitement amongst all the girls is pretty high.”

While the team is eager to return to a normal routine, it is also focused on winning both conference and national championships. The Bombers will have to get past some Liberty League foes in order to reach the national tournament because the NCAA’s new regional alignment placed the University of Rochester, Rochester Institute of Technology and William Smith College in the Niagara Region with the Bombers.

The South Hill squad must win its region to compete for a national championship. Dinan said she is looking forward to this challenge because her primary objective is to bring a title back to South Hill.

“My goal every year is to get a team to the cross-country national championships and that’s no different this year,” Dinan said. “We need to just pick up where we left off the last time we were running.”

The Bombers will return to action at 11:15 a.m Sept. 4, when they will host the Jannette Bonrouhi-Zakiam Memorial Alumni Run in Ithaca.