Women’s lacrosse comes out on top in nail-biter 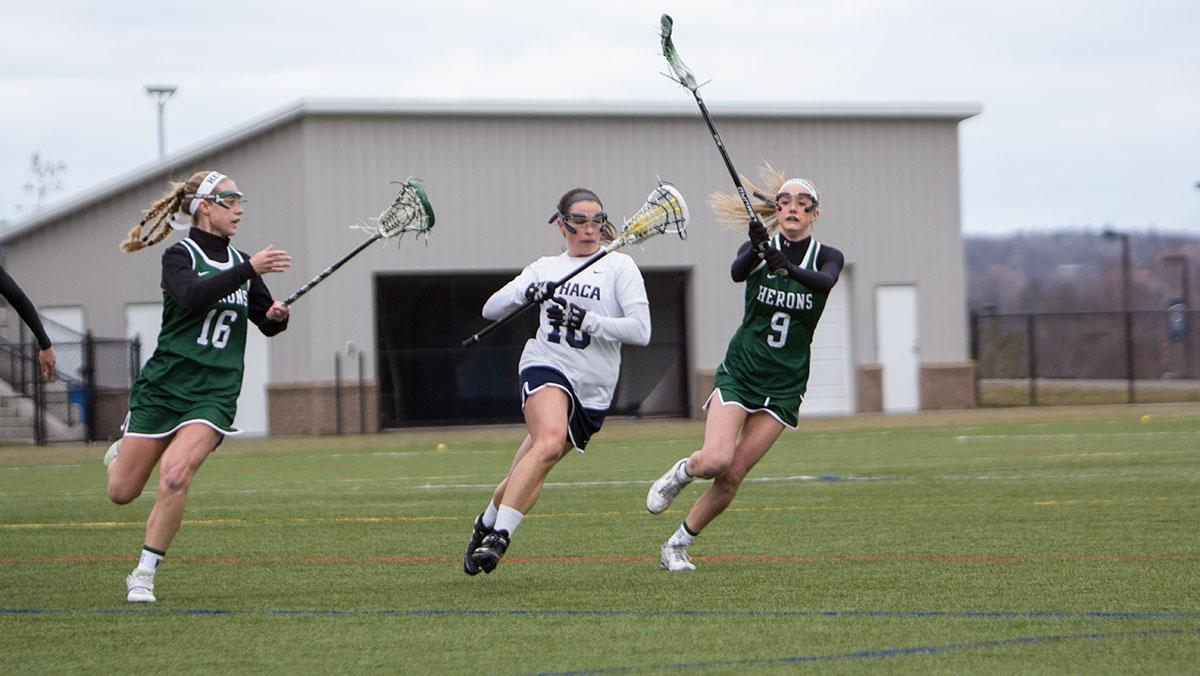 Last season, the Ithaca College women’s lacrosse team fought the William Smith College Herons tooth and nail as the Bombers rallied down 9–8 in the final minutes to score three goals to salvage a 12–9 victory.

This year’s rematch between the two proved to be just as much of a nail biter. The Blue and Gold staved off a gritty William Smith team for an 8–6 win at Higgins Stadium, despite the fact that the squad turned the ball over 22 times.

The South Hill squad now holds a record of 8–3 on the season, whereas the Herons dropped to 4–7.

Head coach Karrie Moore said this was the best performance by the Bombers defense thus far this season.

“We’ve been really harping on them about communication,” she said. “This was the first game that from the opposite end of the field I could hear our defense communicating. So I was really proud of them for that.”

Despite the fact that the Bombers forced the Herons to only convert six of their 28 shots on goal attempts, the squad’s steel curtain defense did not prove to be as formidable as it was early on in the contest.

The Herons won the opening face-off and within the first 20 seconds, they marched into Bombers’ territory and roped in the game’s first goal. The South Hill squad then netted its first goal to notch the score at one apiece.

Freshman attacker Danika Wagener squirmed through William Smith’s defense to score an unassisted goal for her team. This was the first of three goals by Wagener on the evening.

A back-and-forth battle ensued between the two teams. The Bombers took the lead for the first time in the game when senior midfielder Riley Marion put the feed from junior attackman Morgan Racicot in the back of the net.

The lead was short lived, as the Herons tied the score within 2:30 minutes when Alexandra Bird tallied her 13th goal on the year.

The South Hill squad did not waste time recovering its lead. Freshman midfielder Julia Silvestri brought the Bombers back ahead when she scored off of Panara’s first assist of the game.

Wagener’s second goal came right before halftime off of an assist from sophomore defender Molly Long, which gave the Blue and Gold a two-goal advantage heading into the break.

Long would eventually assist on Wagener’s third goal during the second period. Long said her and Wagener had a strong connection throughout the game.

“It just worked today, it was awesome,” Long said. “I just kind of ran down with the ball, brought defenders to me and she was open and it was an awesome connection.”

Wagener said she credited her three-goal outing to her teammates.

“I think it has to do with my team,” Wagener said. “I think they’re making good looks, checking where to see the cutters are and just making sure they are hitting the open man.”

Marion opened the second half with a free-position goal that gave the Bombers a much more comfortable 5–2 lead.

William Smith pulled within one goal of the lead on multiple occasions, but the comeback was ultimately quelled by as the Bombers matched the Herons goal-for-goal.

The Herons minimized the South Hill squad’s lead to one goal one last time before Panara scored her only goal of the contest with 2:08 left to the seal the deal for the Bombers.

The Blue and Gold will ride their three-game win streak into Oneonta, New York, when they take on Hartwick College at 1 p.m. April 16. The Bombers will also put their undefeated Empire 8 Conference record of 4–0 on the line against the Hawks.