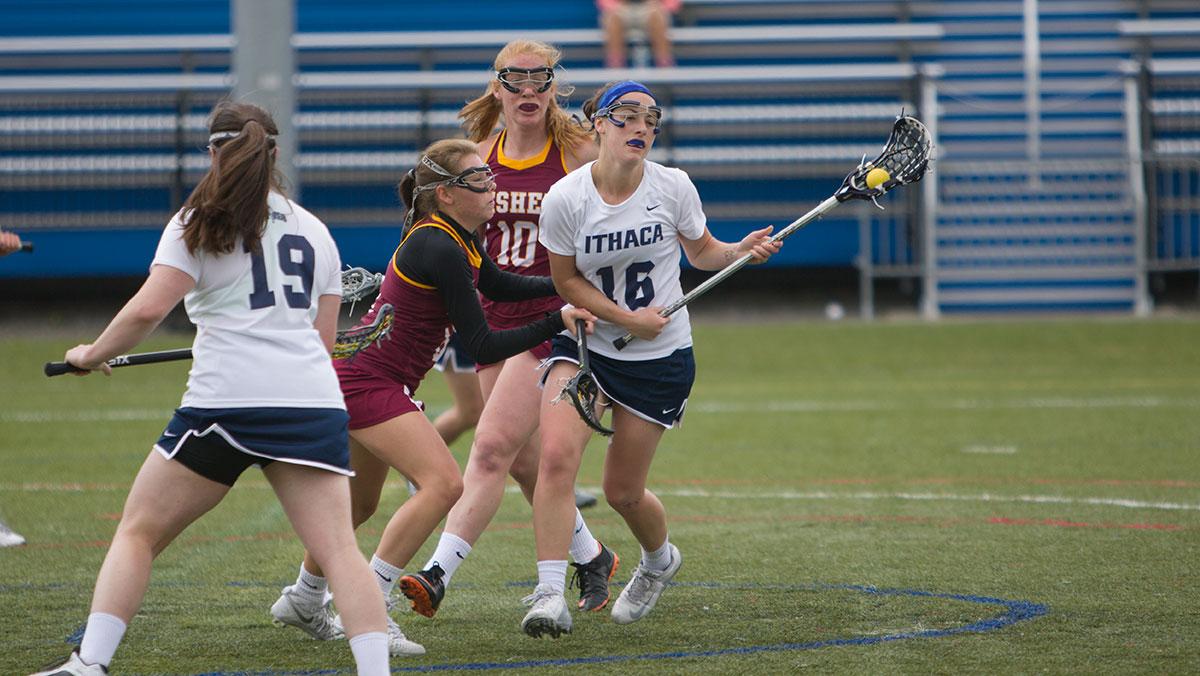 For three long years, the women’s lacrosse team has fallen consistently to St. John Fisher College, with one win against them in 2014. However, that tradition ended April 30 when the South Hill squad defeated the Cardinals 12–11 on Senior Day.

Junior midfielder Morgan Cadwell said the Bombers wanted to win this game more than any other game on their regular season schedule.

“It’s exciting to play in,” she said. “We just had a lot of energy, and everyone on the team contributed.”

The pace of the matchup was exhilarating, as both evenly matched teams were looking to be the one to secure the crucial home field advantage for next week’s Empire 8 Championships.

In the past two games, the Bombers have defeated their opponents by a combined score of 41–3 against conference opponents Utica College and Alfred University.

The Cardinals got on the board first with a quick shot that soared past the shoulder of starting junior goalkeeper Emily Ross in the opening minute. The Bombers would answer the Cardinal goal with a 5–1 run, with goals by Cadwell, junior attackman Morgan Racicot, freshman attackman Danika Wagener and freshman midfielder Julia Silvestri to make it 5–2.

The Cardinals came rolling back by outscoring the Bombers 5–2 in the final 15 minutes of the first half to go into halftime tied at seven. Head coach Karrie Moore pulled Ross for sophomore goalkeeper Kimberly Presuto.

Presuto said that while she wasn’t expecting to be called into service today, she is always ready to answer the call.

“I am always excited when I’m told to go in,” she said. “You always have to be ready to go, and that how it goes sometimes.”

The Bombers made up for their mistakes as the second half started, when Cadwell and senior midfielder Mackenzie Robinson scored back-to-back goals within a minute of each other to make it 9–7 Bombers.

The Bombers and the Cardinals would exchange goals, with the Bombers always keeping the lead no higher than two goals. In the final three minutes, the Cardinals scored to make it 12–11, but the Bombers were able to play keep-away and, with some key saves by Presuto, wound down the clock and survived the Cardinal threat.

The Bombers finished their regular season with an 8–0 conference record and an overall record of 12–4.

The Bombers will now go into the playoffs as the number one seed and host of the Empire 8 tournament. They will play the number four seed, Nazareth College, on May 7.

Cadwell said the home field advantage may give the Bombers the lift they need to prevent the Cardinals or another team from interrupting their championship dreams for a fourth consecutive year.

“I think anybody that plays at home can get an edge on their opponent,” she said. “I think we peaked in this game, and part of that has to do with the home field advantage.”