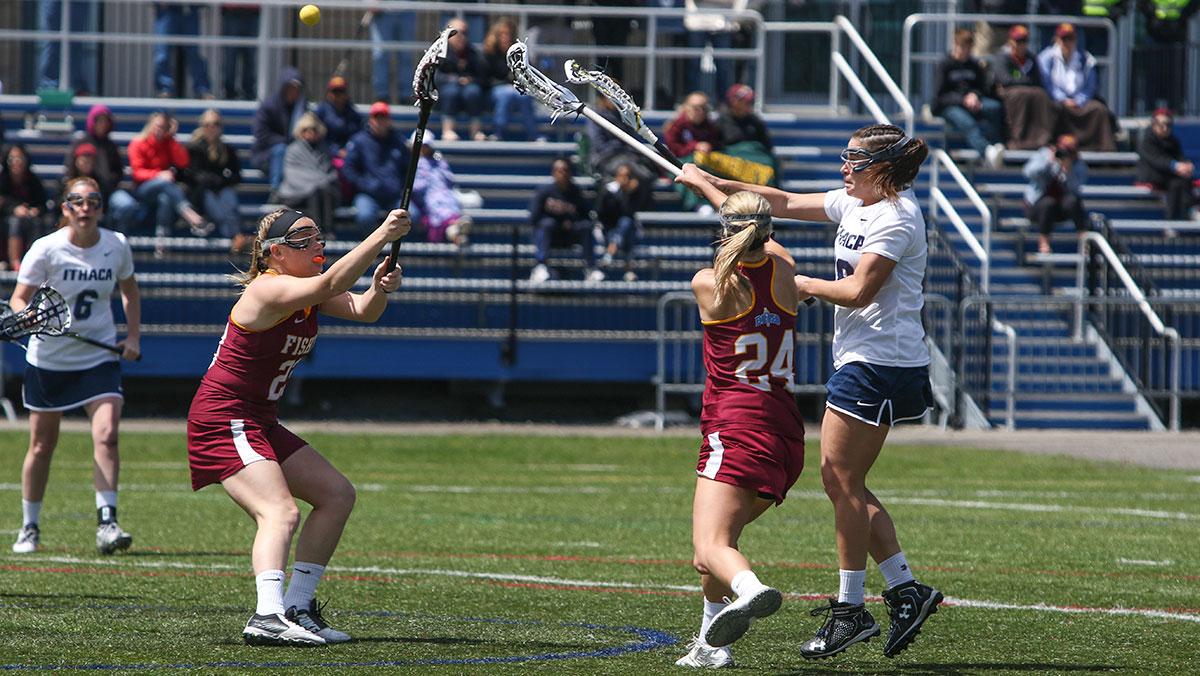 The Ithaca College women’s lacrosse team lost in the Empire 8 Championship game on May 8 to St. John Fisher College in Higgins Stadium. St. John Fisher picked up their fifth straight title, defeating the Bombers 9–8 in double overtime. This is the fourth straight year the Bombers have lost to the Cardinals in the title game.

The Cardinals got on the board first, but junior attackman Morgan Racicot responded less than two minutes later for the Bombers to tie the score at one. However, St. John Fisher quickly took back its lead two-and-a-half minutes later.

St. John Fisher held onto their 2–1 lead for eight minutes, until Racicot added her second goal of the game. The Cardinals once again responded with a goal, but junior midfielder Morgan Cadwell and freshman midfielder Allison Panara scored back-to-back goals to give the Bombers their first lead of the game. The Cardinals tied it up with a goal of their own with a minute left in the half to make the score 4–4 heading into the break.

Senior midfielder Riley Marion came out of break firing for the Bombers, scoring less than four minutes into the half to put the Blue and Gold back on top 5–4. The Cardinals fired back with two goals of their own to take the 6–5 lead with 14 minutes remaining in the game.

For the next minute-and-a-half, the teams traded goals, each scoring two goals. Bomber goals came from freshman midfielder Julia Silvestri and Panara. The Cardinals were winning 8–7 until, with just under three minutes left, Cadwell scored on a free-position to tie the game up at eight, which sent the game into sudden-death overtime.

The first overtime was dominated by defense and neither team scored, sending the championship into a second overtime. With 30 seconds remaining in the second overtime, St. John Fisher senior midfielder Chrissy Cook found the back of the net to propel the Cardinals to a 9–8 win.

Racicot, Panara and Cadwell all had two goals apiece for the Bombers. Junior goalkeeper Emily Ross and sophomore goalkeeper Kimberly Presuto split the time in goal, each picking up four saves.

With the loss, the Bombers do not earn an automatic bid to the NCAA Championship and will have to wait and see if they will earn an at-large bid. They finished the season with a 13–5 record.