Women’s lacrosse goaltenders score a goal of their own 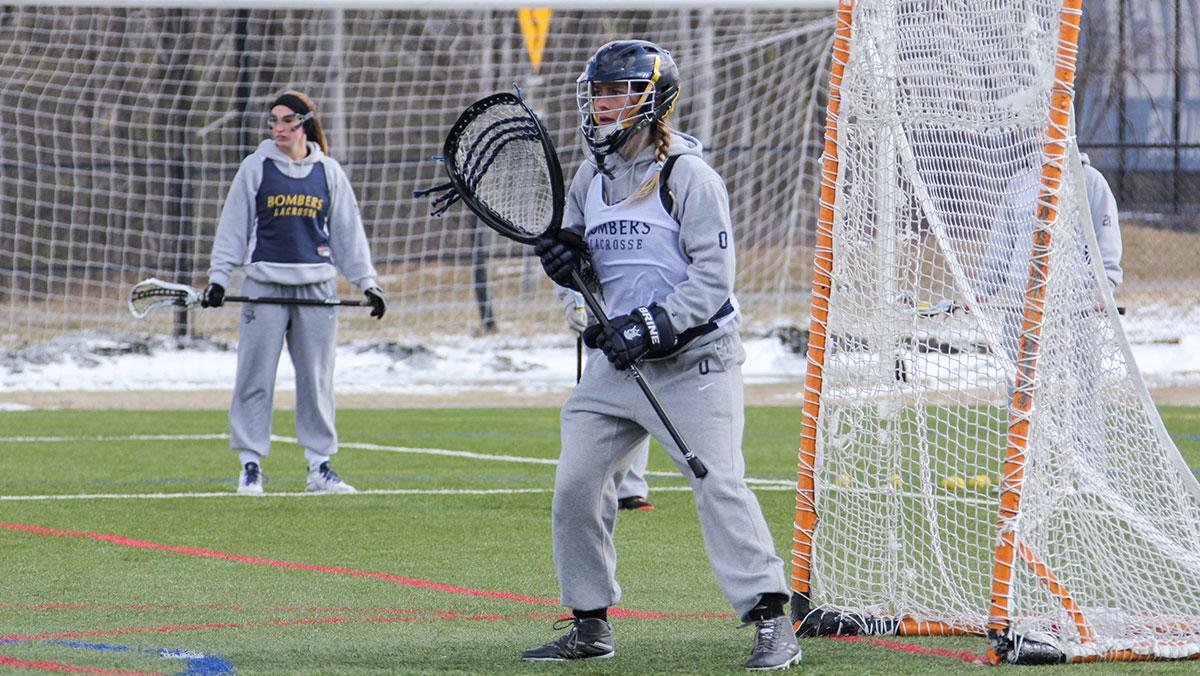 On game day for the Ithaca College women’s lacrosse team, there are two different warmups going on. On one end of the field, you will see the position players stretching or light jogging. At the other end, you will see the Bombers’ two goaltenders being warmed up by former Division I goaltender and current head coach Karrie Moore.

This season, the Bombers have two goaltenders: junior Emily Ross and sophomore Kimberly Presuto. When Moore was hired in August 2015, the whole team had to undergo the adjustment. For Ross and Presuto, the greatest benefit was having a new head coach who used to be a goaltender. Ross and Presuto said getting instructions from a head coach who understands the ins and outs of the position like they do really helps them in their day-to-day preparation.

“She’s very knowledgeable at the game of lacrosse,” Ross said. “Never have I had a head coach who was also a female lacrosse goalie before.”

Moore, the former starting goaltender at the University of Pennsylvania and seven-year assistant coach at Cornell University, brings a defensive style as a head coach that comes from seeing the game from under the mask during her playing career.

“There are ways that we see the game in which we come from,” Moore said. “I am able to relate to the goaltenders more than others because of my past experiences in the sport.”

The team has no official goaltending coach on staff currently, so Moore pulls double duty, managing the day-to-day responsibility of the whole team as well as the goalies specifically.

Moore did stress that she can relate to goalies more due to her past experiences. However, her first concerns as head coach are with all of her players, not just the goaltenders.

“I coach the goalies and the position players the same,” Moore said. “The same work ethic is expected from everyone.”

Moore also said the mixture of coaching and play experience gives her a different perspective of how to help players discover a chemistry that works for the whole team.

“I think when you’ve been coaching a while and you see them play at practices, you get a feel of what they’re good at and what they need to work on,” she said. “My job is to make sure that they can perform to the best of their ability.”

Presuto has dealt with two different head coaches her first two seasons on the team. She said she notices a difference in her performance so far this season.

“She definitely helped my overall game so I can be better,” she said. “With a lot of positive things that I have not gotten from other coaches.”

Presuto and Ross had similar comparisons of the positive things Moore provides with her coaching style, such as the one-on-one attention in certain drills at practice, watching film in preparation for a game or even shooting on them before a practice or a game. The criticism and teachings that Moore provides are small details and game factors that the goalies understand and value.

“She knows what shots we both have to work on,” Presuto said. “It’s helpful because she knows what we need to work on and watches our form to make sure it’s good.”

So far, the experience and preparation have paid off for the two Bombers goaltenders. The team is currently ranked third in the Empire 8 in saves with 7.75 saves per game and ranked fourth in the conference in saves percentage, which for the Blue and Gold is .443. Ross and Presuto have been splitting time, for the most part, this season. Ross, who starts the game, has racked up 227 minutes of playing time in all seven games this season. Presuto has also appeared in every game, racking up 192 minutes.

Ross also pointed out that other head coaches rarely know the standard to which goalies hold themselves and that Moore is good at keeping them held to the standards. Some of these standards include a goaltender’s pre- and postgame preparation, what she should do in certain game situations and how she should act whether the team wins or loses.

Ross explained the reason all the players on the team seem to be connecting with Moore is because of her resilience as a competitor and their ability to trust their coach.

Ross then explained how Moore’s previous experience is great knowledge for the goalie’s vision of the field.

“She gives us good tips at what the offensive players may be doing or thinking from a goaltender’s perspective,” Ross said. “She can discuss it with us on a personal level and say something to pick us up that can help us succeed.”