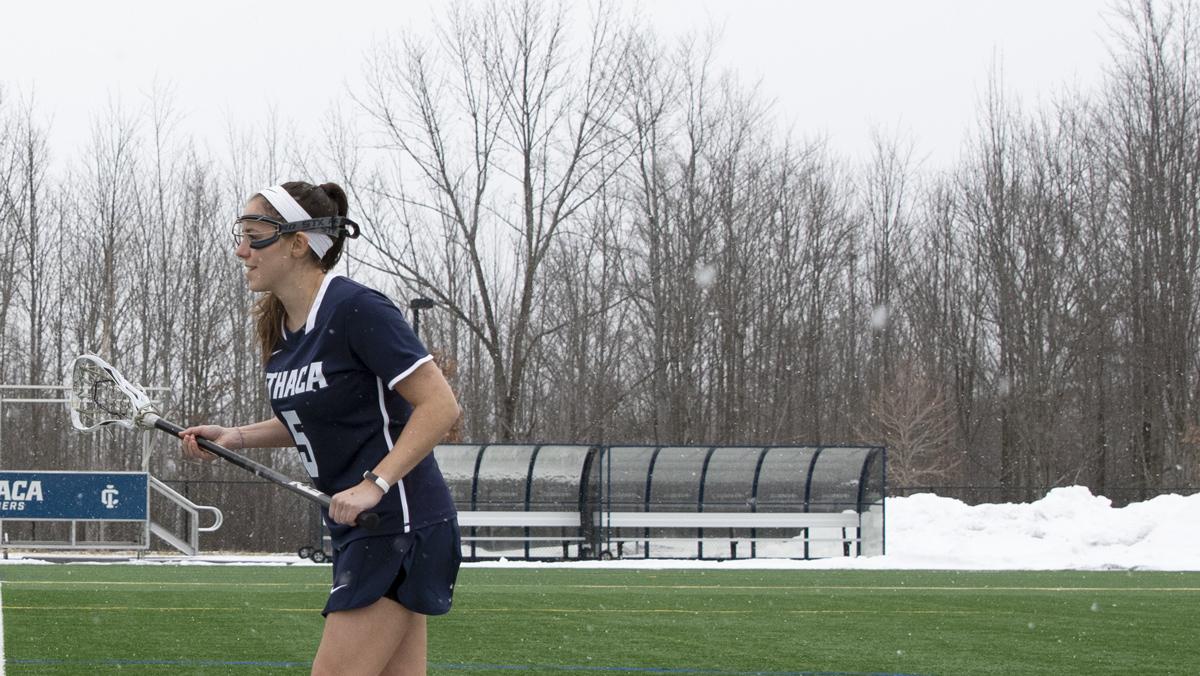 The No. 19 Ithaca College women’s lacrosse team is looking to reinvent its offense and develop its defense to redeem its loss last season in the Liberty League final. With a new assistant coach and plenty of young talent, the Bombers are chasing their first conference championship since 2008.

The Blue and Gold have found themselves in an unfortunate pattern of losses in conference title games. From 2010–16, they played in every Empire 8 Championship and lost every time. In 2017, they were taken out in the Empire 8 semifinals. When they switched to the Liberty League, the trend followed them. After tying for first in the Liberty League in regular-season competition, the Bombers lost to then-No. 16 William Smith College in the championship game.

New assistant coach Kayla Minner brings a new dynamic to the South Hill squad’s offense, which will give it an edge this season. Minner competed from 2009–13 at Division II Mercyhurst University and previously served as assistant coach at Division I Winthrop College. Head coach Karrie Moore said she is hopeful that the new energy brought by Minner will help break the team’s curse.

“It’s fun for our team to move things around,” Moore said. “I’ve been coaching the offense, so it’s nice to switch things up and keep them fresh. She has really awesome insight, and I think our team is really taking advantage of that.”

Senior captain Allie Panara said she is excited about Minner’s role in strengthening the team’s attack.

“She has brought in some new drills and offensive sets that we’re looking forward to using during the season,” Panara said. “She has integrated really well into our team culture and will be a big asset.”

Panara, a returning captain from 2018, will also be critical to a strong offense for the Blue and Gold this spring. She lead last year’s squad in assists with 52, and she was third for goals scored, notching 39. She was named a Liberty League Offensive Player of the Year and selected to the IWLCA All-Empire Region First Team. Panara said consistency will be her focus in competitions this season.

“Our biggest challenge will be our ability to perform consistently,” she said. “It’s something we’ve struggled with year to year, and this is going to be the year we are a consistent team. We have a great group of players that love the sport and love each other. Our motivation to perform to our highest potential is something this group values.”

The team returns its entire starting attack and midfield this year, another factor that bodes well for the offense. Senior attacker Elizabeth Rice had a breakout season in 2018. She scored only five goals as a sophomore, then led the team in scoring during her junior campaign with 67 goals and 15 assists. Junior Bailey Herr, who had 46 goals last season, will also be a key scorer for the Bombers.

Sophomore midfielder Jacqui Hallack will be a force for the squad in the center of the field. She was named Liberty League Rookie of the Year in 2018, starting in all 19 games as a freshman and scoring 36 goals. Defensively, she recorded 17 ground balls and caused six turnovers.

“We lost some veterans out of our defense, so I think we’ll be growing on the defensive end, but we also have plenty of people coming back,” Moore said. “I don’t think it’s going to be a rebuilding year, but we do have players who will be stepping into more important roles.”

Junior Reid Simoncini will be a strong defensive leader for the Bombers this year. Simoncini was awarded All-Liberty League Honorable Mention and notched 38 ground balls as well as 19 forced turnovers in 2018. Simoncini said it will be critical for the team to develop chemistry among the defenders, as most of them haven’t worked together before.

“We have a big number of defenders, so we haven’t really figured out who’s going to play together and what process we’re going to go with,” Simoncini said. “I think just coming together and communicating and making sure everyone knows each other’s strengths and is backing each other up is the goal.”

Last year’s starting goalkeeper, Kimberly Presuto, also graduated in 2018, after being named to the All-Liberty League and All-Empire Region First Teams. Sophomore goalkeeper Mackenzie Schade will take her place. Schade appeared in just two games last season, so she will be an athlete to watch as she attempts to adapt to her new leadership role on the field.

Coming into the regular season, Moore said that the team is focused on strengthening its fundamentals. She said she is excited about the potential that the team has shown during preseason.

“We have plenty that we need to improve on, but I do think the things that we stress — more of the culture things — I think we’re on a really good road with those things, and the details will follow,” Moore said. “I feel really good about where we are with our hustle and work ethic.”