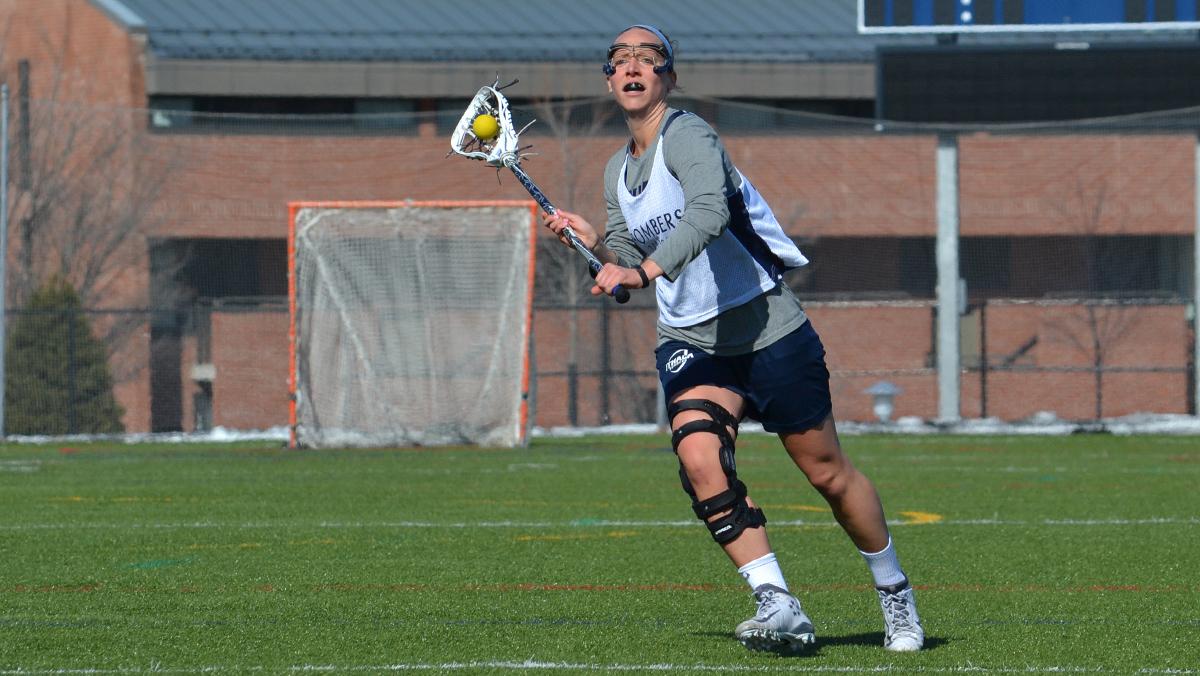 In May 2015, the Ithaca College women’s lacrosse team traveled to Nazareth College to take on St. John Fisher College in the Empire 8 Championship game. Graduate student Ally Runyon, a junior at the time, was a starter and stood ready to receive the ball from her teammate in the opening face-off. An opposing player next to Runyon received the ball, and Runyon ran back to play defense.

When the opposing player switched directions, so did Runyon, but then she heard a pop in her knee. Runyon was out for the remainder of the game and for her senior season because she tore her ACL. She is now back on the team and preparing to lead the team into its upcoming season.

“When the injury happened, I knew because it is such a distinct feeling,” Runyon said. “It happened in the beginning of the game, and I thought to myself, ‘I’m going to try and walk, and if I can walk on it, then I can run on it, and then I’ll go back in the game.’”

Runyon has been an integral part of the women’s lacrosse team since her freshman year, when she was named Empire 8 Rookie of the Year and tallied 31 goals. In 2015, during her junior season, she was named third–team All-American.

With the ACL injury occurring in May 2015, Runyon could have had the surgery right away, but there was a catch. She had an anatomy lab that began at the end of May, so if she had the surgery, she would not be able to walk around the lab and would have to miss two weeks of classes.

Runyon instead had the surgery in August 2015, but having the surgery later delayed her recovery. It normally takes 6–9 months for the tear to heal after surgery, and Runyon said she thought that she would come back just in time to play her senior season.

However, her recovery time was set back an additional 3–4 months because of abnormal swelling in the knee, so she was unable to play her senior year. With the help of her coaches, teammates, professors and the athletic department, Runyon said, she got the support and help she needed to come back even stronger this year following the injury.

“When the doctors told me [I couldn’t play last year], you kind of feel bad about yourself for a little bit,” she said. “But then you have to get over it and look at what you’re going to do to make this better and what are the positive sides of this. I can learn from this, physical therapy–wise and lacrosse-wise. I can watch film, watch my teammates and do rehab at a great place with great people. You had to focus on those things rather than the negatives.”

Karrie Moore, women’s lacrosse head coach, said she also suffered an ACL injury in college, so she could relate to Runyon. However, Moore became the new head coach in September 2015, so she didn’t see Runyon play until the start of fall practices in 2016.

“She’s just a really smart attacker and was one of our captains,” Moore said. “She did a really nice job from the sidelines really trying to help her teammates and seeing a bigger picture that is sometimes hard to see when you’re not playing on the field. I fully believe that she is one of those players that having an injury and taking a year off is really going to help her game a lot.”

Senior Morgan Racicot said Runyon acted like another coach last season and that Runyon even carried her own whistle.

“When she was out, she was kind of like someone who wasn’t playing with me, but she knew where I was coming from so I could always talk to her or ask for her advice on certain things,” Racicot said. “If I was having a bad game or if I was having a lot of turnovers, I would come out and she would know exactly what to say or be like, ‘you got this,’ or give me feedback on what I can do better.”

Moore said Runyon did a good job working out on her own to stay in shape and prepare herself for this season and came in with a positive mindset.

“When you have people who miss so much, they come back with a really renewed sense of love for the game and just a joy and a gratitude that this is something that they get to do,” Moore said.

Runyon said after not playing last season, she had to find her place again on the team.

“Coming into this season with the same offense as last season was difficult at first because I was trying to find my place in it because they all had their strengths,” she said. “Once I got the hang of it, and you start working with people, you get to work off of them.”

Runyon said she is back to playing at 100 percent, and she is determined to help the team reach its goals this season.

“The thought of not coming back never crossed my mind,” she said. “I never thought of not playing again. There was no way that I would give up this fourth year. I’ve been looking forward to this year, and I’m so excited.”

CORRECTION: A quote from Morgan Racicot was inaccurate and has been updated

Women’s lacrosse goaltenders score a goal of their own

Lacrosse has different rules for men and women