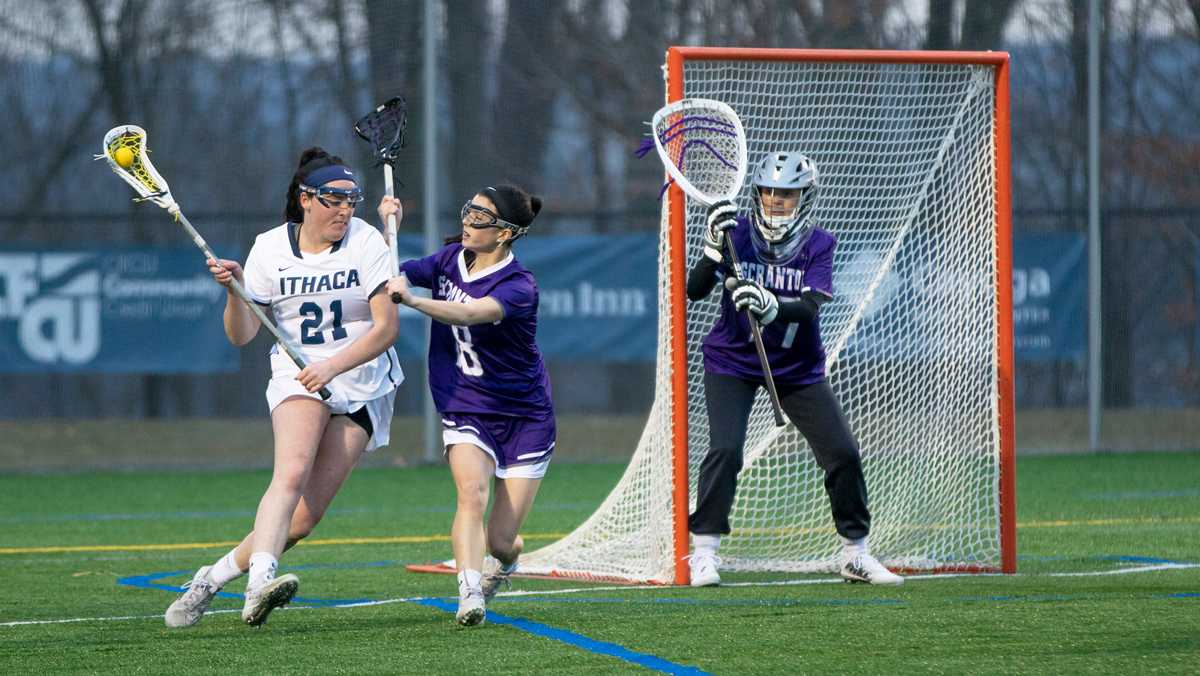 Mikayla Rovenolt/The Ithacan
Senior attacker Bailey Herr maneuvers around a block from junior attacker Kiera Carmody as she moves to make a goal on Feb. 26 at Higgins Stadium.
By The Ithacan
Published: March 4, 2020

The Ithaca College women’s lacrosse team will be playing against some of the best competition in Division III in the upcoming weeks, months before the playoff season begins at the end of April.

Over the first five games of the year, the Bombers, who are ranked 19th, will face four other ranked opponents, including one game against No. 17 Colorado College in Colorado Springs, Colorado, over spring break. Head coach Karrie Moore said she wanted to put some tough games into the schedule just in case the team did not win the Liberty League. Playing against better teams during the regular season improves a team’s chances of getting into the NCAA tournament on an at-large bid.

Moore said there are two ways to get into the NCAA championship tournament: either win the conference or earn an at-large bid. Those bids are typically awarded to top teams in the nation that lost in their conference championships, and this is how the Bombers made the tournament last year.

“[Strength of schedule] plays in so much at the end of the year with the regional rankings,” Moore said. “We try to control that as much as we can.”

Senior attacker Bailey Herr said the team needs those games if the Bombers want to make it to the tournament without coming out on top of the Liberty League. Winning the league title is a significant challenge because No. 15 William Smith College has won the last four championships.

“Coach ensures that we’re playing tough competition, so no matter what, we have a good record and standing,” Herr said.

Although having those tough games can be a benefit for the Bombers if they win them, they also pose a high risk if the team loses. Losing those games could give the Bombers a worse overall record, which would make it harder to earn an at-large bid. Herr said it also could decrease the morale of the team.

Junior midfielder Jacqui Hallack said that, while the team always tries to win, the tough games at the start of the year will serve as a test for the team of how it will fare in the postseason when all of the opponents will be at a higher level.

“Getting exposure to these teams that are really good early on will help us to make it to the postseason,” Hallack said. “If we can compete with them and even win in the beginning, then it’s a really good testament to how we’ll do at the end.”

It is a tough way for any team to start its season, but the players know to expect it. Herr said that having those tough games at the beginning is a good way of starting strong and jumping into things.

The team brought home a victory against rival No. 22 SUNY Cortland on March 1, but it first took down the University of Scranton, which was ranked No. 24 at the time.

The Bombers defeated the Royals 17–8 to improve to 2–0 Feb. 26. The team also won against Cortland 16–12 to remain undefeated so far, but Herr said she knows they still have plenty of games to play.

Moore said each game is going to bring the team a new set of challenges, both in-conference and out-of-conference, but she said she feels those challenges are what the team needs to make it back to the tournament for a second straight year.

“The goal is that we keep moving forward,” Moore said. “We take each game, and we prepare as much as we can for it, and then we look at it and try to grow from it, really no matter what happens.”