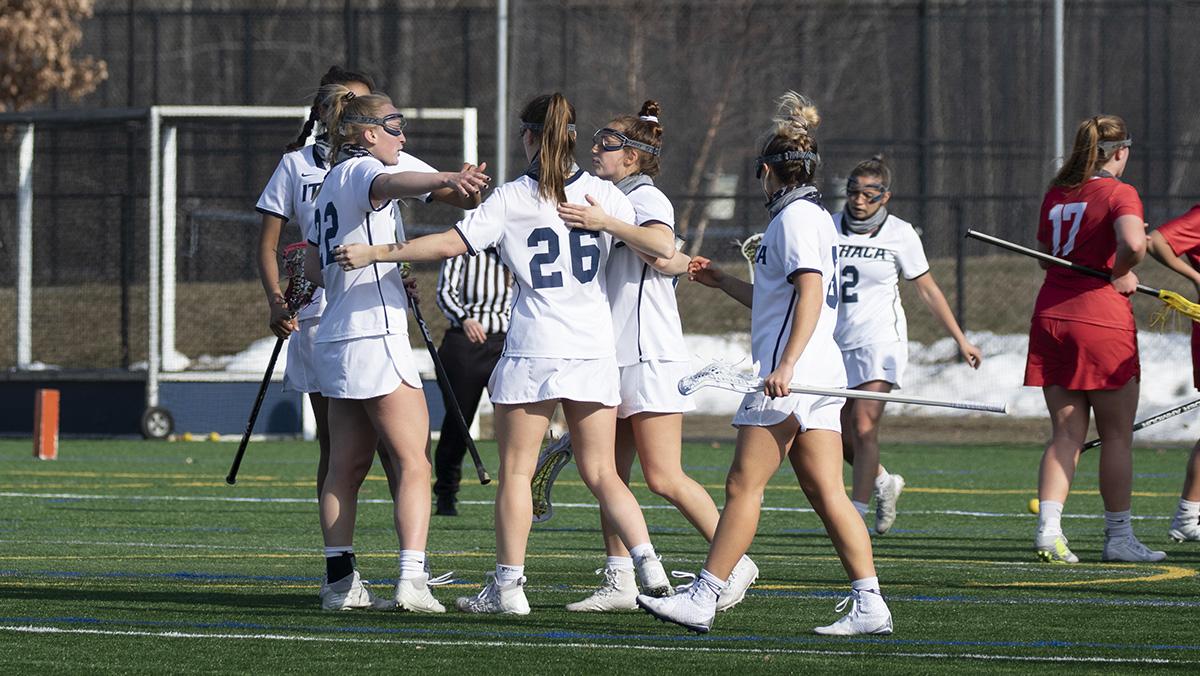 Frankie Walls/The Ithacan
The women's lacrosse team is off to their best start in program history since 1983.
By Emma Kersting — Staff writer
Published: April 14, 2021

The Ithaca College women’s lacrosse team is ranked 7th in the Intercollegiate Women’s Lacrosse Coaches Association (IWLCA) poll and is off to the best start in program history since 1983.

The Bombers are currently undefeated seven games into the season and have defeated ranked teams like SUNY Cortland, The College at Brockport, and William Smith College. The South Hill squad started the season ranked at 15, and the team now trails six undefeated teams in the rankings: Franklin and Marshall College tops the list, followed by Washington and Lee University, Tufts University, Salisbury University, Gettysburg College, York College and Catholic University. However, the rankings do not affect the team’s placement in the NCAA championships. Since there is no at-large bid this season, the Bombers will need to win the Liberty League in order to make it to the playoffs.

Senior midfielder Jacqui Hallack said she believes the team’s high ranking is a testament to the players’ commitment to the team. Since the team started practicing later than usual with their fall training being canceled, Hallack said she is proud of the early success of the team.

“Us being seventh in the nation just shows our hard work and all the dedication that we put in the preseason, to follow the covid guidelines, and continue to play now,” Hallack said. “All of the hard work that we have put in this far in the season is paying off and we are being recognized as a top 10 team.”

Head coach Karrie Moore, who is currently in her sixth season with the women’s lacrosse team, said she is excited to see her team succeed. While going 68–23 in her time at South Hill, the team has won 14 consecutive regular–season games dating back to the 2019 season. At the same time, she said she is not surprised at its success this season since the team trained extensively, both remotely and as a team in person, leading up to the season and continues to put in work.

“I think for us, it’s where we expect to be,” Moore said. “We want to be a national contender. The rankings don’t mean a whole lot to us other than just a reflection of how hard the girls are working.”

Senior attacker Alexa Ritchie said there has been a shift in culture over the last two seasons. After the 2020 season ended so abruptly and there was uncertainty about having a season this year, the team is grateful to be on the field playing again.

“We’re super connected, we have each other’s back,” Ritchie said. “It’s a team connection that I’ve never even felt on a team before these last two years. It’s insane to be a part of.”

The Bombers are currently first in the Liberty League standings, but one team that Ritchie said could threaten them is William Smith College. The Bombers defeated the Herons twice this season, winning by a combined score of 22–14. Ritchie said the Herons, who are ranked 19th in the IWLCA poll, could pose a challenge for the team as they are only two games behind the Bombers.

Looking forward to the rest of the season, Ritchie, Hallack and Moore have set goals to continue their success. All three of them said their main goals would be to complete the first undefeated season in program history, win the Liberty League and get as far as they can in the NCAA championships.

“We like to set small milestones each week so that we can focus on each game individually,” Hallack said. “A Liberty League championship and a tournament run are always in the back of our heads, but we can’t get there if we don’t handle the games in front of us.”

Hallack said these small goals ranged from performing better than the previous game, putting together two full halves without any lulls and being prepared each week for their next opponents. Ritchie is also eyeing a perfect record and league title.

“Personally, [my goals are] to keep improving, keep pushing my teammates, building a stronger connection than we already have,” Ritchie said. “You can actually see that potential that we have here. Just meeting that potential would be a huge goal.”

The Bombers are scheduled to play University of Rochester, which is 2–3 and not ranked, and Vassar College, which is 2–1 and not ranked as well, each two more times to conclude their regular season. The Liberty League Championships begin on April 28, with a time to be announced.