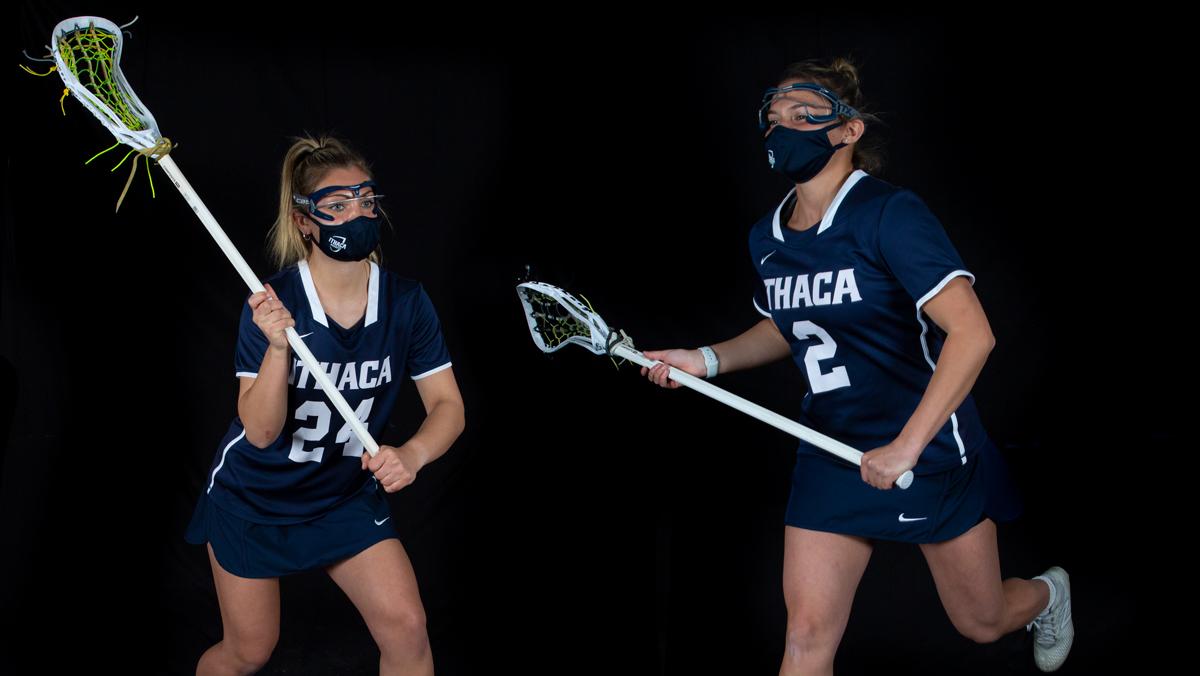 At the beginning of the 2020 season, the Ithaca College women’s lacrosse team looked like one of the best Division III squads in the nation. Although COVID-19 ended that strong start prematurely, the Bombers are motivated by the challenges of the past year and are focused on playing with gratitude every single day.

The South Hill squad was ranked No. 19 in the Intercollegiate Women’s Lacrosse Coaches Association (IWLCA) 2020 preseason poll and posted four wins against nationally ranked teams in its first five games last season. The team was rewarded for that display of potential, and it entered the 2021 season ranked No. 15/16 in Division III. They have since moved up to No. 11.

“We want to be a top 10 nationally ranked Division III team,” Hallack said. “We think we deserve that, and if we work hard enough and we beat those teams that we need to that are below us, we should get the recognition and ranking that we deserve.”

Hallack will be a key piece for the Bombers this season in the midfield. In just five games last year, she scored a team-high 22 goals and secured 26 draw controls as the team’s center. She has also been named twice to the All-Liberty League First Team and earned IWLCA All-Empire Region First Team honors as well in 2019.

Head coach Karrie Moore said the team’s greatest strength this year will be its core group of upperclassmen. Twelve of the squad’s 26 roster spots are filled by seniors, and Moore said their leadership has been essential to the smooth transition back to on-campus activities and competition.

“They do a great job of pushing their teammates,” Moore said. “They came in as a huge group of freshmen, and they have just really grown as a group. I’m really proud of where they’ve brought the team.”

Defender Molly Nodiff and midfielder Rachel Rosenberg are also important members of that senior class. The Bombers need to replace Becky Mehorter ’20, who was a consistent defensive force for the team last year, and the duo of Nodiff and Rosenberg can certainly fill that hole. Rosenberg led the team in caused turnovers and ground ball recoveries in 2020, and Nodiff has been a consistent starter since her sophomore year, earning All-Liberty League Second Team honors in 2019.

The biggest challenge for the South Hill squad will be overcoming the yearlong setback caused by COVID-19. Moore said the team’s eight freshmen had not played competitive lacrosse in nearly two years because the high school season had not yet begun when the pandemic hit.

Athletes also had varied access to training facilities like fields and gyms, so many were keeping their skills sharp through simple exercises like playing catch against a wall or lifting with items around their homes. Junior defender Gill Hanson said the return to practicing on campus was especially strange because of the college’s COVID-19 protocols.

“We first started off as playing in three different pods, which was so different than years before,” Hanson said. “We had to play non-contact for a while and be away from the whole team, which was super sad. However, since we did that, it made us bond as small groups so much better and get to know the freshman a lot better.”

Moore said she has seen a shift in the team’s mindset that she attributes to the loss that they all experienced when their seasons were canceled in 2020. She said the team is grateful for all of the hard work put in by the college’s athletic department to allow the spring season to occur and for the opportunity to compete each time they are on the field.

“Every year your seniors have some urgency because it’s their last year, so they’re like, ‘Oh, my God, this is my last chance at doing this thing, or accomplishing these goals,’” Moore said. “I think that more than just the seniors now have that sense of urgency, which I think is a really good thing. It’s shed a little light on how fragile things can be and how taking things for granted is not really the way we should live.”

The women’s lacrosse team became the first spring sports team to take part in intercollegiate competition at home when they faced No. 23 SUNY Cortland on March 17. They defeated the Red Dragons 18–11 and continued the positive momentum with a 9–7 win against The College at Brockport on March 20. Moore said she is less concerned with technical skills and is focused on developing the squad’s teamwork and competitiveness this season.

“Lacrosse is a game of mistakes, so you have to be okay with failing on the field sometimes,” Moore said. “The best teams get over it right away. That’s what I want to see on the field. Do they stay connected? Do they stay together? Can we carry each other through a game? It’s about playing with the right emotion and mindset on the field.”