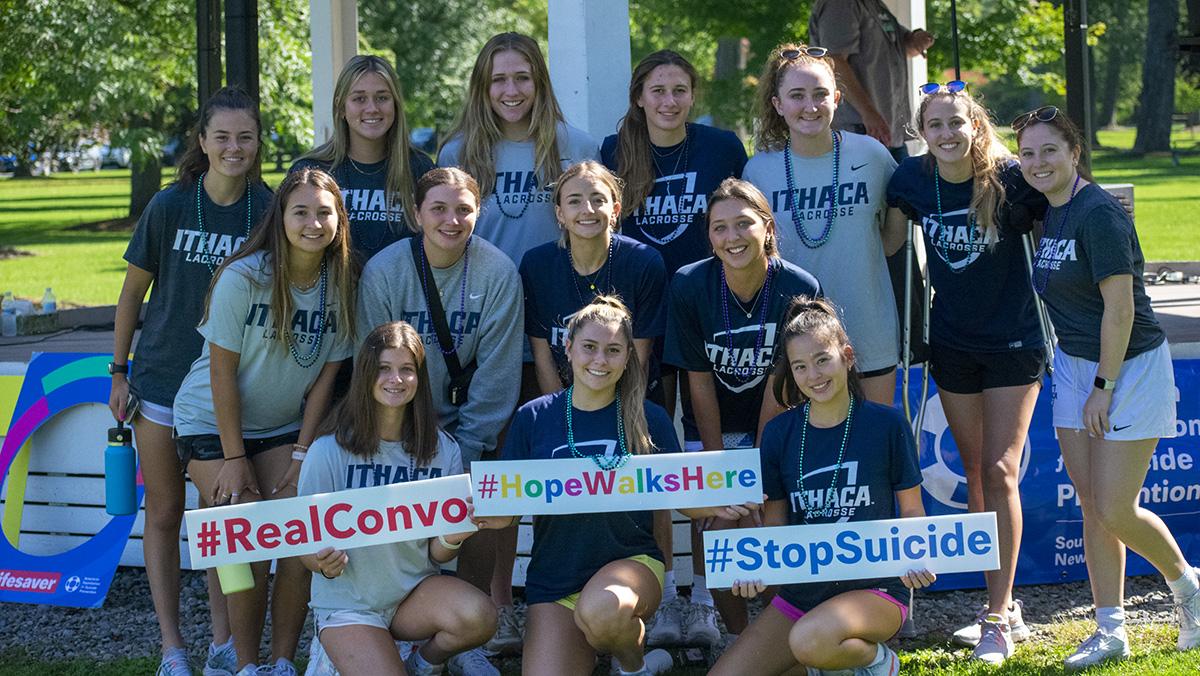 Rayahna Tryka/The Ithacan
The women’s lacrosse team raised money for suicide prevention and Alzheimers awareness Sept. 10. The team split into two groups to be able to attend both of the walks, which were at the same time.
By Aidan Charde — Sports Editor
Published: September 13, 2022

As sophomore defender Kaitlyn Russell, a member of the Ithaca College women’s lacrosse team, walked around Myers Park in Lansing, New York, she started to tear up.

Along with about half her team, Russell was just one of about 100 at the American Foundation for Suicide Prevention’s walk Sept. 10, an annual event that raised over $59,000 this year. The other half of her team was at the Walk To End Alzheimers, happening at the same time, which raised over $57,000.

Russell said she was emotional because of what the walk meant to her. She said it was amazing to see how many people showed up for the event to support such a great cause, especially because a major role model of hers took his own life.

“I lost my 10th grade English teacher to suicide,” Russell said. “I was a junior when he passed away, and he was someone who was very influential to me. He really helped me figure out what I wanted to do with my life, … so I wanted to come and honor him here.”

Though their head coach Karrie Moore was not at either event, Moore said she was happy to see her athletes take the initiative to work for two great causes and was proud of how they represented the program. She said the charity walks, along with most of the volunteer work the team does, is spearheaded by the athletes themselves, not her.

“All of the community service stuff we do as a team, it’s really driven by our players and things that they are invested in,” Moore said. “And you know, once we decide to take something on, then we dive in as a team and everybody does it.”

Moore also said she and the team pride themselves on working as hard as possible to raise money for a cause at any given occasion. That rang true for both walks, as the team raised nearly $2,500 for Alzheimer’s research and over $2,000 for suicide awareness by reaching out to family members and posting on social media.

Just like Russell with the walk for suicide awareness, junior defender Maggie Mandel had a connection to the walk she participated in. Mandel said her grandmother died of Alzheimer’s before she was born, but because she is growing up in her mother’s childhood home, there are memories of her grandmother everywhere.

“Everything [at my house] reminds me of my grandmother,” Mandel said. “For me, it was more about support for my mom. She’s done the Alzheimer’s walk in my hometown for I think six years now with a group of her friends.”

Mandel also said the team is incredibly supportive of each other, especially when it comes to community service. If someone cares about a cause, the team will be there for them.

“Pretty much whenever one of our teammates has something that they’re interested in supporting or hits close to home for them, we back them up,” Mandel said.

The team’s drive to do good in their community is something Moore said she respects about her athletes. Although she said she could tell them to do a charity event, it is a lot more meaningful when they are the ones to take the initiative. And, she added, it is a great time for team bonding.

“I think it’s really nice for them to kind of do things together as a team,” Moore said. “I also feel, if they’re going to do community service or just be involved in the community, I want it to be because they want to do it and not because I’m mandating it.”

Russell said team bonding is really the key piece. She said it is great to be able to raise so much money for great organizations, but it is also a way of learning about her teammates and becoming better friends with them.

“Not only is it a great opportunity for us to get together outside of the lacrosse fields, but it’s a good bonding opportunity,” Russell said. “Obviously, everybody’s here or at the Alzheimer’s walk for a reason. And it’s a good opportunity to learn more about each other, obviously a two mile walk is a good chance to bond with each other, and just be together as a team outside the field.”

Although Mandel and Russell had personal connections to the organizations they were fundraising for, Mandel said she is just happy to see her teammates step up to support each other, regardless of how close they were to the cause.

“We are a family,” Mandel said. “The girls on my team are my sisters. They’re my best friends, I do everything with them. So to feel that support outside of the fields and outside of the locker room, in our personal lives, adds another level of complexity to our relationship that I think definitely benefits us in terms of our wins throughout the season.”

The team still has plenty of time to connect before the season begins, but charity events like this are something the athletes can never get enough of. Moore said the team is also planning on volunteering at the YMCA’s winter 5K, called the Santa Run, as well as the college’s BomberTHON event, but if anything else comes up during the offseason, she said the team will jump at the chance.