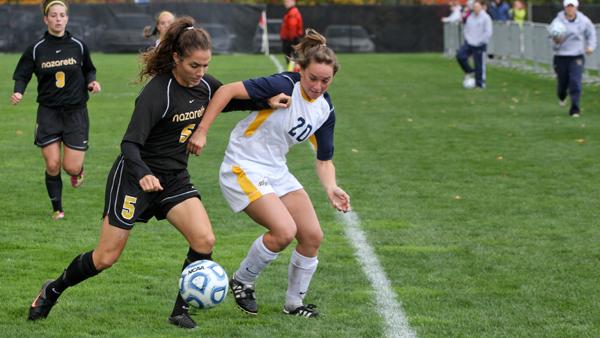 After a blistering first half of close calls and tense moments, the women’s soccer team was finally able to pull away from Empire 8 Conference rival Nazareth College in a 3-1 victory Saturday on Carp Wood Field. The Bombers have remained perfect this season and improved their record to 12–0.

The two teams were scoreless for the first 45 minutes of play, but there was plenty of action and scoring opportunities for both sides. Head Coach Mindy Quigg said she expected an enthusiastic Nazareth team and said the Golden Flyers brought a style of play that caught the Bombers’ attention.

“That first half was the fastest pace we’ve felt so far,” Quigg said.

Nazareth Assistant Coach Dave Giordano said the rapid pace of play was a part of the Golden Flyers’ strategy. Giordano said he believed his squad was able to outplay the Bombers in the first half.

“Our quality of play is what set us apart from Ithaca,” Giordano said. “Ithaca was able to finish their chances, and that was the story of the second half.”

The Bombers finally got on the board in the 57th minute when junior forward Ellyn Grant-Keane fired a looping shot over Nazareth junior goalkeeper Abbie Carey. However, Nazareth freshman back Brianna Vibbard answered right back with a goal less than two minutes later. Vibbard’s goal ended senior goaltender Becca Salant’s shutout streak of seven straight games, dating back to Sept. 9 against Marywood University.

After allowing the tying goal, the Blue and Gold were able to answer back when freshman midfielder Kelsey King rocketed a pass ahead to sophomore midfielder Jessie Warren, who converted on her second goal of the year. Senior forward Rachael Palladino then put the game out of reach in the 80th minute with an angled shot from the right side of the net, raising her total to 56 career goals.

After the game, Palladino said Nazareth was one of the only teams the Bombers have played that did not have letdowns in their play during the game.

“We had to pick it up a lot more in the second half,” Palladino said. “I think we started to win more 50-50 balls and began to play our own game.”