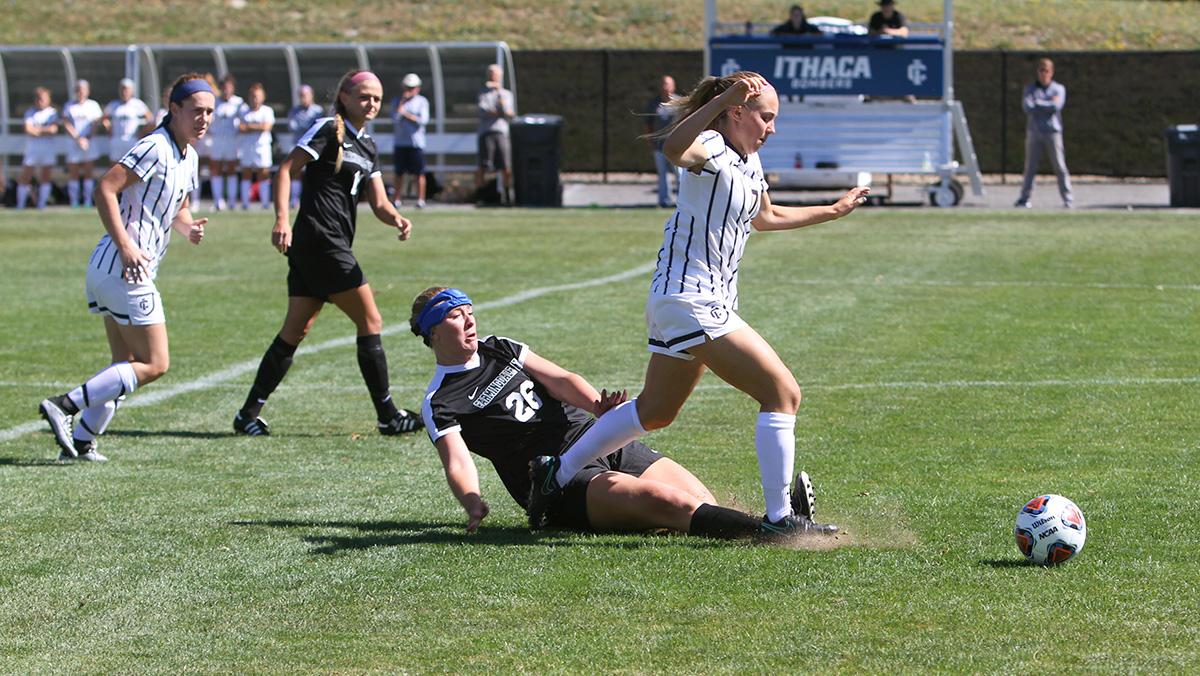 The Ithaca College Women’s Soccer team improved its record to 4–0 after a double overtime victory against the SUNY Farmingdale Rams on Sept. 11th.

The Bombers played a great first half, taking eight shots on the Farmingdale defense while holding the Rams to just two shots of their own. Although the team was able to earn seven corner kicks, they were unable to capitalize as the game remained scoreless going into the second.

In the second half, the play got physical. The Rams earned themselves two yellow cards to go along with six fouls. The two teams combined for thirteen total fouls in the half. Both teams took three shots each, but no goals were scored, sending the game to its first overtime period.

In the first overtime, Ithaca had five shots while the Rams only had one. The game then went into second overtime, where senior forward Megan Nash scored the winning goal off an assist from senior forward Holly Niemiec in the 105th minute.

Senior back Lindsey Parkins said composure was the  key to the Bombers win today.

“The best thing you can do is just stay composed,”  Parkins said. “You can’t let the other team get to you, so you just have to play hard.”

Nash said staying calm throughout the game helped the Bombers come out on top.

“What helped us today is that we continued to play our game instead of giving into the physicality of it,” she said.

Head coach Mindy Quigg said she was proud of her team’s ability to not succumb to the pressure they faced.

“They did a good job of taking the high road and competing,” Quigg said. “I think it made us stronger playing Farmingdale. The physical play got a little crazy at times, but we handled it pretty well.”

The Bombers return home Sept. 17th at 11 a.m. against SUNY Cortland in the Upstate Collegiate Cup at Carp Wood Field.