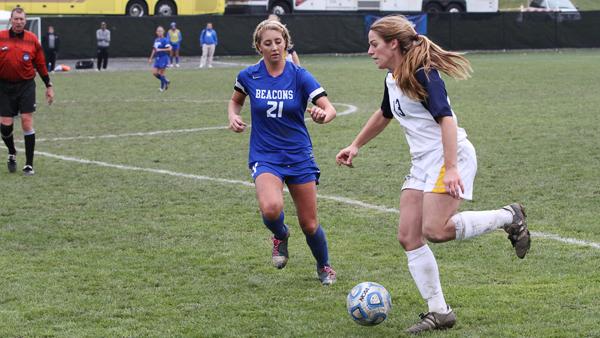 Former Bomber Chelsea Feldman ’09 looked down from the stand as she saw her career goals mark of 61 get tied, broken and added to all in one game.

Senior forward Rachael Palladino scored a hat trick to break Feldman’s career goals record and kick-started the struggling Bombers offense to a blistering five goals in a 5-1 win against the UMass-Boston Beacons in the first round of the NCAA Division III Tournament.

Palladino said it was special to have Feldman at the game and to break the record on the Bombers’ home field.

“I knew [Feldman] was on the sidelines, and I was doing it all for her, because I knew she really wanted it for me,” Palladino said. “It felt great to score multiple goals and move ahead further in the tournament.”

Before Palladino scored the record-tying goal, she assisted junior forward Ellyn Grant-Keane, who scored the game’s first goal in the 18th minute. Palladino then struck with a header two minutes later.

Palladino said the most important aspect of the Bombers’ victory Saturday was their ability to score in the first half.

“I think it’s important to get on top early and show the other team we’re going to bring pressure the whole game,” Palladino said.

After forcing 11 corner kicks in their previous game against Nazareth College, the Bombers forced 13 corners against the Beacons, which was one shy of a season-high total. Senior midfielder Julie Winn, who took the corners for the Bombers, credited Palladino for taking advantage of every corner kick.

“[Palladino] always finishes goals, and she’s always on the other end of the corner kicks we have,” Winn said.