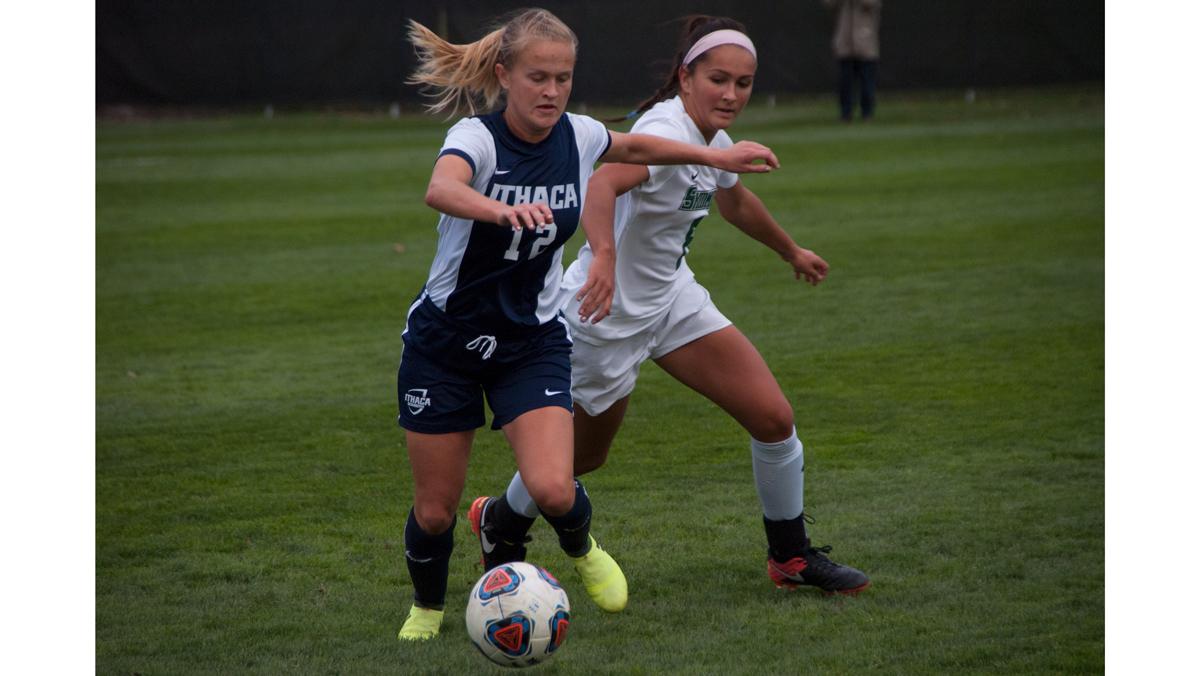 The Ithaca College women’s soccer team beat Skidmore College Oct. 13 by a score of 2–1 at Carp Wood Field. This was the Blue and Gold’s first win in the Liberty League this season.

Both teams had been struggling to get results. Skidmore does not have a win in their last eight games, and the Bombers having a three–game losing streak going into the game.

The first half saw plenty of chances for the Bombers as they threatened early, hitting the goalpost in only the third minute of play. Junior midfielder Shoshana Bedrosian then had two shots narrowly miss the goal in the 6th and 7th minutes of play.

The first goal came in the 27th minute as freshman forward Alex Epifani dribbled past multiple Skidmore defenders and swung in a cross, which the keeper was unable to catch, and was put away by junior midfielder Sam Robinson.

Skidmore equalized 10 minutes later, getting the ball into the box with a cross, and before the Blue and Gold were able to clear it, junior midfielder Courtney Shaw was able to score.

Right as it looked like both teams would be going into the half at 1–1, in the 43rd minute, Robinson picked up the ball and crossed into the box. The cross was then deflected into the path of sophomore forward Jordyn Haynes who was able to put it in the back of the net, making it 2–1 Bombers.

With a goal and an assist, Robinson cited going hard to goal as one of the keys for the win on the day.

“Sometimes we get caught just tapping at the ball,” Robinson said. “But we just went full body through all the balls in the 18 [yard box] and I think it worked in our favor.”

The South Hill squad was then able to clamp down in the second half, not allowing any goals and being able to preserve the win, and hitting the bar in the 67th minute.

Head coach Mindy Quigg was vocal in her praise for the back line in the game, especially the two center backs senior Kendall Cirella and freshman Kate Kohler.

“[Kendall and Kate] really were very, very smart,” Quigg said. “They held their line really well, they balanced, they provided depth, and they were very disruptive to Skidmore’s attack.”

“It was a huge team win today,” Bedrosian said. “I think that getting three points on the table was something that we needed, and now we’re not closer to the bottom and we are getting closer to the top, which is something we really needed as a team.”

The South Hill squad will be looking to continue the good form as they take on division rivals Union College at 2 p.m. Oct. 14 at Carp Wood Field.