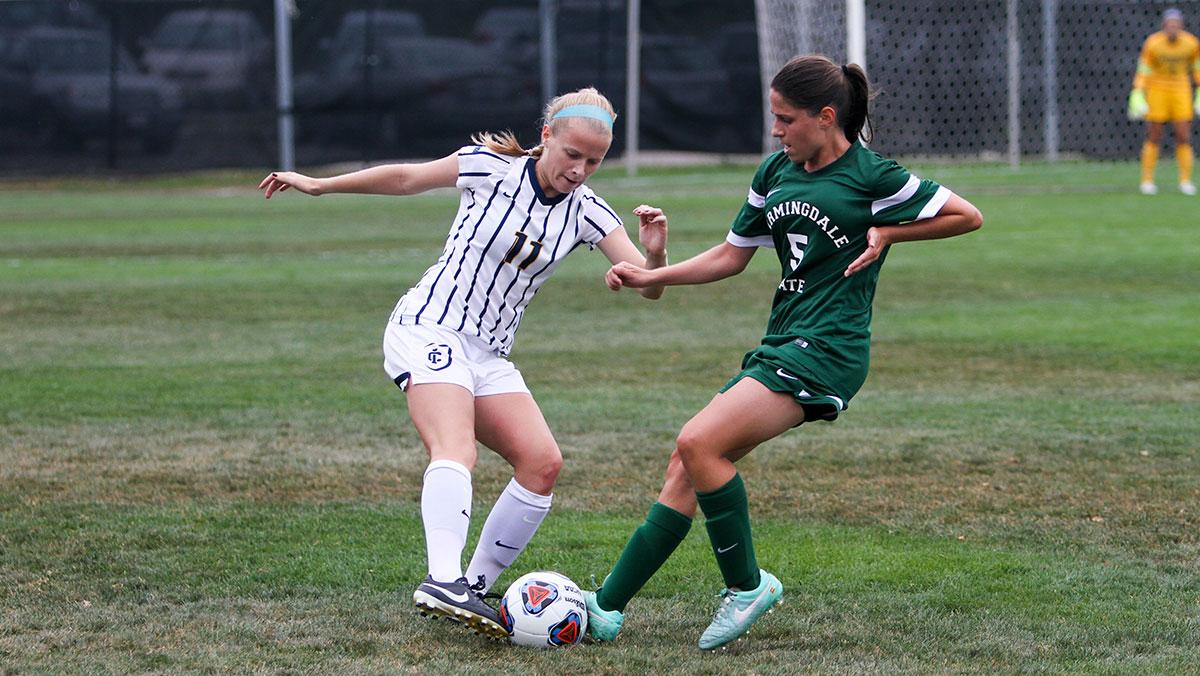 The No. 25 women’s soccer team took on the Farmingdale State Rams on Sept. 12, winning the game 2-0 to improve its record to 3-1 on the season.

To begin the game, the ball was mostly on Farmingdale’s side of the field as the Bombers had a shot on the goal early. However, Farmingdale goalkeeper, Breanna Blair, was able to tap the ball onto the top of the net for the save.

Senior forward, Sarah Woychick, scored the first goal of the game at the 11:07 mark in the first half after coming out of a cluster in front of the goal off the assist of senior forward Kelsey King.

Senior goalkeeper Beth Coppolecchia led the way defensively early on, making five saves in the first half to keep the Bombers’ lead.

The second goal was scored at the 30 minute mark in the first half off the foot of junior forward Holly Niemiec. The ball bounced up over the Farmingdale goalkeeper, who had a hand on it but was unable to corral it as it sailed over her head into the back of the net.

The Bombers had two more chances to score again in the first half. Woychick missed a shot on an open net and midfielder Taylor Baranowsky had another great shot but hit the crossbar.

The second half was a battle for both teams as the ball was regulated to the middle of the field and neither team could seem to get an advantage over the other.

Junior midfielder Jess Demczar tried a shot with 17 minutes left to go in the game, but it went left, just missing the goal.

Farmingdale stepped up its defense in the second half, and even though the Bombers had a couple close shots on the net, the Farmingdale’s defense held up.

The Blue and Gold struggled to keep up the offensive pace as the game slowed down and their defense saw more action in the second half.

Head coach Mindy Quigg said she felt the Bombers had just become more comfortable with their lead after keeping the ball out of their offensive zone in the first half.

“We just sat back and were playing not to lose instead of playing to win,” Quigg said. “I just felt like we were just holding up and just didn’t want to give up a goal, and it doesn’t matter if you win by two or three goals. I think we just started to drop in a little bit, and we lost the flow of our game and ended up defending a lot.”

Quigg also said she feels the team is playing well, however, there is still room for improvement.

“I think we’re playing well, we just need to have more consistency,” she said. “[There needs to be] just a little more fight at times, a little bit sharper, a little more work on our timing.”

Coppolecchia, who totalled eight saves on the day, said the defense was a team effort today.