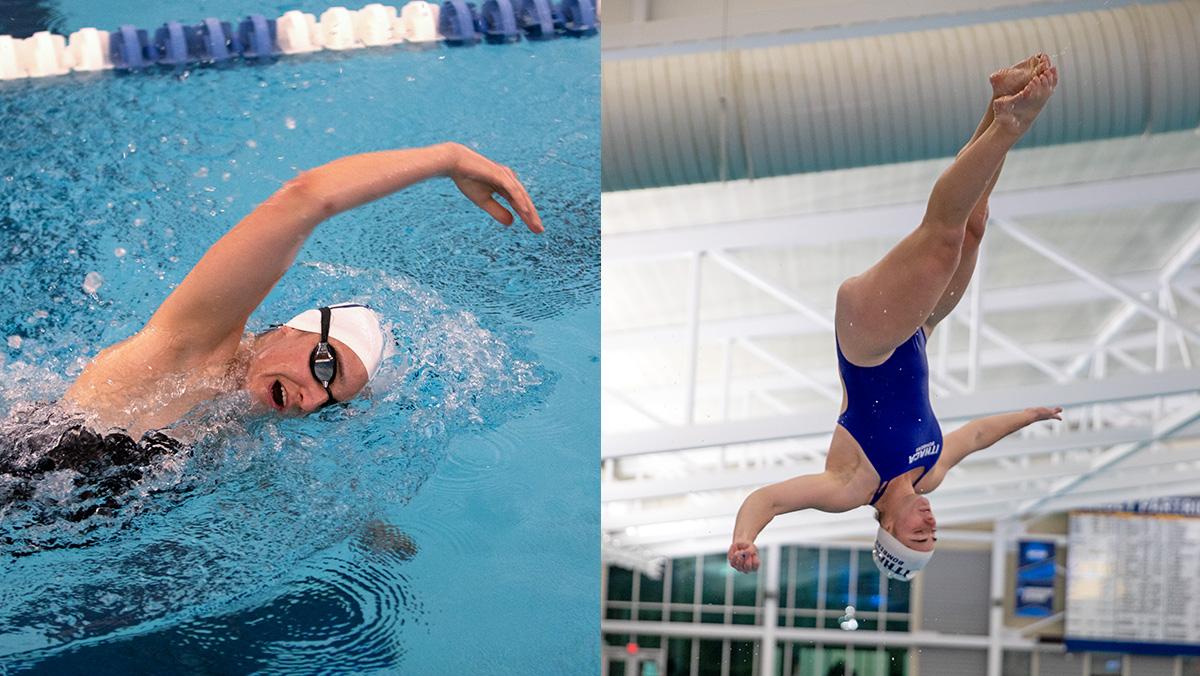 With the freezing cold winter approaching, the Ithaca College women’s swimming and diving team makes its return with big ambitions for the upcoming season as sports move indoors.

Last season, the Bombers finished first in the Liberty League championship, completing a three-peat as they successfully won their third-straight Liberty League trophy. The Bombers are poised to sustain their recent success and are looking to get their fourth straight title in the new season.

As the new season approaches, graduate student diver Abby Marraccino said she has high expectations for herself and her teammates in the pool.

“My individual goals as a senior are to have a positive attitude every practice and appreciate all the time I have with the team,” Marraccino said. “Some further goals are definitely to get a couple of new dives and make it back to nationals hopefully.”

Senior swimmer Emily Shorb said the team has been preparing all summer for this season and worked on welcoming the new first-year students to the team, along with bonding as a group.

“Before our season started on Sept. 26, we were doing captain practices for a couple of weeks,” Shorb said. “In the summer, we have a summer challenge thing we do where we record our workouts on MapMyRun and we make teams, and we can see other people’s workouts. … It’s how we stayed interactive over the summer and it was a good way to meet the [first-year students] too.”

Leading up to the upcoming season, Marraccino said the team has been getting to know each other, making them stronger as a group, by having open discussion with each other.

“We’re really taking a step back on Saturdays, instead of practicing, taking the time to talk in a circle about ways we can improve our team and work together,” Marraccino said. “Even though swimming and diving are both individual sports and team sports, realizing we’re there to push each other.”

Along with that, Shorb said the coaching staff of the swimming and diving team have been leading the athletes after the recent coaching changes, which saw head coach Kevin Markwardt take over the role of both men’s and women’s swim team head coach.

“So, we had a transition during the COVID year and we kind of united as one team, men and women, where the two men’s coaches became our coaches,” Shorb said. “That was definitely a transition, just because of the pure number of athletes we have.”

According to Shorb, the coaches for the team have been doing a good job, even if they have to split time between the men’s and women’s rosters. She said the coaches have worked to prepare the Bombers for their upcoming season.

“Our coaching staff has played a big role in our season, especially last year,” Shorb said. “The practices are hard, but they have definitely prepared us well. Everyone had really large time jumps last year at Liberty Leagues; it was really fun being a part of it.”

Associate head coach Mike Blakely-Armitage said he is excited to see what the women’s team can do during the season. With such a successful season last year, he said there are plenty of athletes to watch out for.

“I would say that one of our captains, [senior swimmer] Emily Vandersleen, is going to be one of our top performers in sprints and [butter]fly,” Blakely-Armitage said. “[Senior swimmer] Jane Pfeufer, who is a senior, is going to be one of our better sprinters. First-year [student swimmer] Sonia Mlakar, she’s a really top recruit coming in. She should be able to make nationals just going by her best times. … Then I would add for divers that [seniors] Karalyn Pawcio, Rachel Lange [and] Abby Marraccino are going to be top performers there as well. They are returners from nationals.”

Markwardt said he is interested to see how this season will look compared to previous ones as the Bombers head into it as the defending Liberty League champions once again. But he said the talent on his roster is making him optimistic for the results.

“The standards are pretty high,” Markwardt said.  “… We need to realize we have a target on our back. We need to get up in the appropriate times to have the success that we’ve had in the past.”

Markwardt added that just because the team is coming in as title defenders does not mean it is planning on coasting the whole season — there is always room to improve.

“It’s not like we don’t want to get better, because we do want to get better,” Markwardt said. “We want to mainly maintain the success that we have had in the dual meet realm and conference meets. … It’s one thing to get on top, it’s another to stay on top.”

As for which opponent he thinks will provide the biggest challenge, Markwardt said there are some familiar rivals ready to challenge for the crown.

“Well, [the Rensselaer Polytechnic Institute] and [the Rochester Institute of Technology (RIT)] are for sure [difficult opponents], and that’s in the fall,” Markwardt said. “There are teams at the [Bomber Invitational on Dec. 2–4] like [the University of Rochester], which will be a good challenge for our women. … Then we also got Hamilton [College], who’s been really coming up and building. We get to see them at the invite, they’re not on our dual meet schedule.”