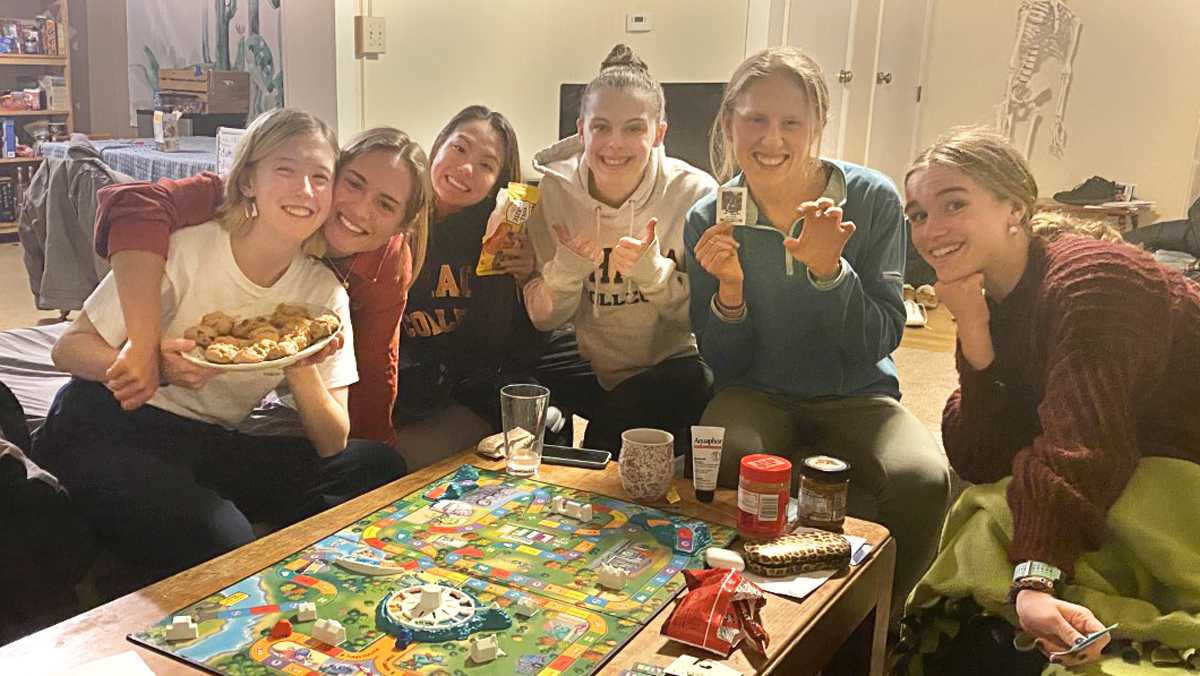 Courtesy of Lindsay Scott
Several members of the women's track and field team enjoy board games and snacks while bonding in upperclassmen housing during winter break.
By Lauren White
Published: January 22, 2020

While underclassmen from other winter sports teams returned to their dorms at Ithaca College during winter break training, the women’s track and field team’s underclassmen moved in to their teammates’ apartments to bond.

The team competed in three meets during the academic break on Jan. 10, 11 and 18.  Members of the team returned in early January, and the freshman and sophomore women’s track and field athletes stayed at the houses of the upperclassmen.

Women’s track and field head coach Jennifer Potter said this tradition began years ago when the college did not open residential halls for the underclassmen over the winter break. She said that some other winter sports teams would have athletes stay in hotels, but in her previous experiences at other institutions they would stay in upperclassmen housing. While the dorms do open over break now, Potter said she continued to have them stay off-campus with the upperclassmen so that it would be easier for underclassmen to have appropriate meals. Each athlete is allotted money for groceries and meals by the college during the winter break weeks.

“It’s nice that houses can be available to underclassmen…” Potter said. “They can pool their meal money and create meals. It’s a neat learning experience. Some people who’ve never cooked before learn to, and people that are really good at cooking get to cook for their teammates.”

Senior thrower Kendall Wellauer said Potter works out the logistics of assigning the housing arrangements, and she said most juniors and seniors house at least three underclassmen. Wellauer said the arrangement gives students who live in the dorms easy access to a kitchen until the dining halls reopened on Jan. 18.

“Some of [the underclassmen] don’t know how to cook, so we get to do that with them and be like, ‘Here’s how you cook chicken,’” Wellauer said.

Junior pole vaulter Julia Nomberg hosted two teammates and said the break is all about connecting and learning about each other. In addition to bonding, Nomberg said the Bombers also discussed individual and team goals.

“We all love what we do,” Nomberg said. “We’re a Division III school, so it’s not like we’re being forced to be there. We’re doing what we love as a team … and we have each other’s backs.”

Senior captain Elizabeth Gee said the break is a time where the team can really get to know one another and also establish connections with people that they may not have talked to during the normal semester. Because the women’s track team is larger than most sports teams, they are separated into event groups for training and do not have many opportunities to interact with athletes who compete in other events.

“I like to say it’s a time for our big team to have the feel of a smaller team,” Gee said. “We get just as close as the smaller teams on campus even though there are over 60 of us.”

Freshman sprinter Katharine Downey said she could not wait to get back to Ithaca while she was at home for winter break. She said she was excited to return to live and train with her teammates.

Throughout the time with her team, Downey said they hosted events such as having a watch-party of “The Bachelor” and participating in a Twister tournament.

“For me at least, it creates connections,” Downey said. “And friendships with people that I wouldn’t have had necessarily walked up to on my own. It’s intimidating being a freshman coming onto such a competitive team and not necessarily knowing anyone.”

Downey said the team is successful in finding a balance between having fun and training to work hard.

“I think when we are at practice we buckle down, we get what we have to do done, but we always have fun with it,” Downey said. “When it comes time to run, we’re all there, we are present, we are ready, and we push each other. It’s a very tight-knit team, I wouldn’t have it any other way.”