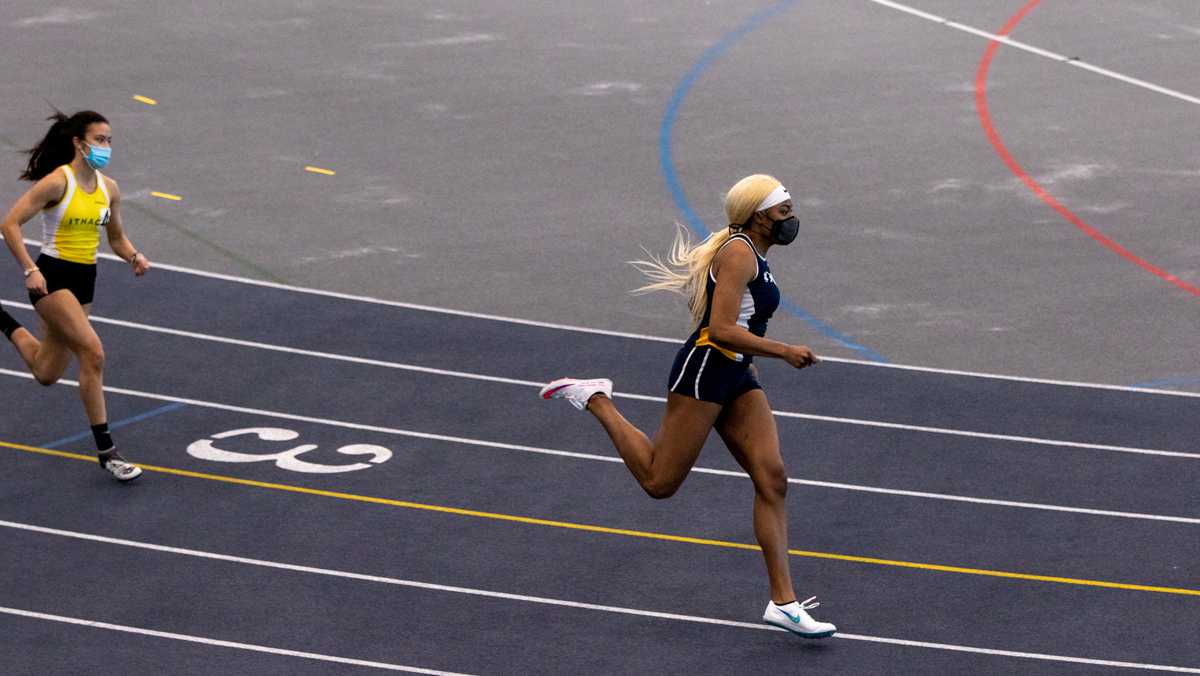 After ending the 2020 indoor season ranked No. 2 in the country, the Ithaca College women’s track and field team is back in the top 10 for the outdoor season and is looking to make a push to get its first national podium since earning second place in the 2016–17 season.

As of April 27, the team is ranked No. 2 in Division III, trailing behind the University of Wisconsin-La Crosse. The Bombers have seven athletes ranked in the top 10 in their events. Junior Meghan Matheny, senior Juliann Terry and freshman Sara Altonen are ranked in pole vault, junior Katelyn Hutchison in the 400 meters, senior Parley Hannan in the 1,500 meters, 5,000 meters and 10,000 meters, junior Logan Bruce in the long jump and heptathlon, and senior Samantha Healy in the hammer throw. In those rankings, Hannan ranks first in the 5,000 and 10,000 meters, and Matheny holds the top spot in pole vault.

Head coach Jennifer Potter said she was disappointed at the abrupt end to the 2020 season, but she said it has helped make the team more motivated.

“We’ve lost four seasons [since March of 2020] and four national championship opportunities, and I’m proud of the women staying motivated because they kept getting the door slammed in their faces,” Potter said. “They had a lot to just quit about, but they didn’t.”

Despite athletes competing as individuals in their events, they score points for the team based on where they place. Potter said it is important for the team to score in as many events as possible.

“It’s not easy to win a championship in track and field,” Potter said. “There’s a lot of events, so the team has to be pretty deep. It’s a matter of whether we have the people to do it.”

Matheny said that even though COVID-19 has made the past year hard for the team, she is impressed with the way the athletes have looked so far.

“A lot of people have been hitting personal bests and are ranked really well, and we had a school record broken recently,” Matheny said. “We’re nationally ranked, top 10, so I think we’re all doing really well.”

The Bombers had an impressive start to the season with three straight team wins at the Nazareth Invitational and dual meets against SUNY Cortland and University of Rochester. The rest of their meets this season did not have team scores, but several individuals have scored in the top-five places of their respective events.

While being the best in the nation may seem like a lot of pressure, Matheny said she is not worried about living up to expectations.

“You can’t really focus on what you accomplished in the past,” Matheny said. “You use it as motivation to accomplish more, but especially in pole vault, my biggest competition is practicing right there beside me.”

Hannan said she agrees with Matheny that the team tries to ignore expectations and instead just competes to the best of its abilities, especially because their biggest critic is themselves.

“I try to hold onto the joy of running and use my love for the sport to fuel me instead of trying to fuel myself off of my times, especially because I always think I can do better,” Hannan said. “When I broke the 5k school record, I wasn’t happy with my time because I knew I could go faster.”

This season has been full of hard work as the team has been preparing for months for their return to competition. Potter said that the year it missed was still filled with training, conditioning and mental health support to keep the athletes in shape for when they came back.

“We did a lot of Zoom things, not all training, and in the fall when we would have started training again, we would check in daily to see how everyone was doing,” Potter said. “We tried to make it like what it would be like if they were on campus, trying to keep that sense of normalcy as much as we could.”

Despite this, the hiatus was tough on some athletes. Hannan said the lack of structure had effects on her mental and physical state.

“Toward the end of last season, I was pretty shot and then the mental strain of COVID was a lot,” said Hannan. “I wasn’t doing any workouts [over the summer]. and I was just doing a lot of high mileage and high volume, which just wasn’t healthy or sustainable.”

Matheny said she thinks the team will be able to keep moving forward and finish well at nationals.

“We have a lot of talented and up-and-coming young athletes on the team as well as established juniors and seniors, so I do think we have what it takes,” Matheny said. “Coach Potter always calls us a postseason team, so I think as we get toward that, people will have better and better performances.”

The Bombers have one more regular season meet at SUNY Geneseo on May 1 before competing in the Liberty League Championships, Cortland Qualifier Meet, All-Atlantic Region Track and Field Conference Championships and NCAA Championships.