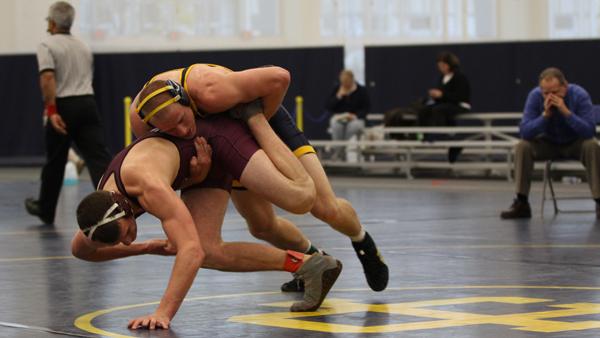 While the wrestling team took down Rochester Institute of Technology on Dec. 5 with a dominance reminiscent of their earlier meets this season, some of the wrestlers tried moves that were not quite as familiar.

In the 43-3 rout of the Tigers, the Bombers won nine of the 10 matchups with five pins and four decisions. Junior Chris Ramirez, who wrestles in the 285-pound weight class, had one of those pins a little more than three minutes into his match. While grappling with his opponent toward the edge of the circle, Ramirez was able to grab hold of his opponent’s leg, drag him back toward the center and drop him down for the pin.

Ramirez said it was one of the newest counter moves that Head Coach Marty Nichols has had the team practicing, and he knew the matchup with the struggling Tigers presented a good opportunity.

“What Coach wants us to do is to try out these new techniques and not worry so much about winning,” Ramirez said. “We try to take these new moves that we’re learning so we can master them when we get to the bigger matches later in the season.”

Nichols said his team is trying to focus on fundamentals and sometimes is more reluctant to try different moves.

“[Ramirez] tried something that we’ve been going over with, and he was nervous to do it at first,” Nichols said. “Once he saw the opportunity to try it, he executed, and it’s exactly what we’re looking for out of him.”

Junior Shane Bartrum, who won the 197-pound weight class during the Ithaca Invitational in November, said he has been enjoying the ease of the early season and using it to try out new techniques.

“Early in the season, you try to relax and once in awhile try some new something new and mix it up a little bit,” he said. “We’ve taken control of a lot of our matches early, and we’ve done a lot better in staying on top of our opponents and not letting them get back into it.”

The Bombers closed out the weekend with a 27-9 win against SUNY-Oswego, which saw several underclassmen with a chance to compete on the mats. Freshmen Henry Beaman and Dan Glinko were each able to pick up a victory in their respective weight classes. Beaman said he has learned a lot of new moves, especially with the help of fellow teammate senior Ricky Gomez.

“It’s difficult practicing against some your own teammates sometimes,” Beaman said. “It’s nice when you can get out there and use some of the different moves you learn during the year against some other teams.”

Senior captain Jules Doliscar has gotten off to a fast start. He has won his previous two matches in times of 1:47 and 2:17. During both bouts, Doliscar was able to stay on top of his opponents, giving them little opportunity to go back on the attack.

“Sometimes you don’t know who you’re going to face, but you have to come in knowing that you can beat your opponent and not give them chances to steal a match from you,” Doliscar said.

After these wins, he said the team is right where they should be but said he knows the team has a lot to improve on before stepping back in the ring again in January.

“You want to do well and work to see what you can improve on in these types of matches,” Doliscar said. “You enjoy your victories, and it really makes it easier when you have other teammates working hard and hopefully keep it going the rest of the season.”