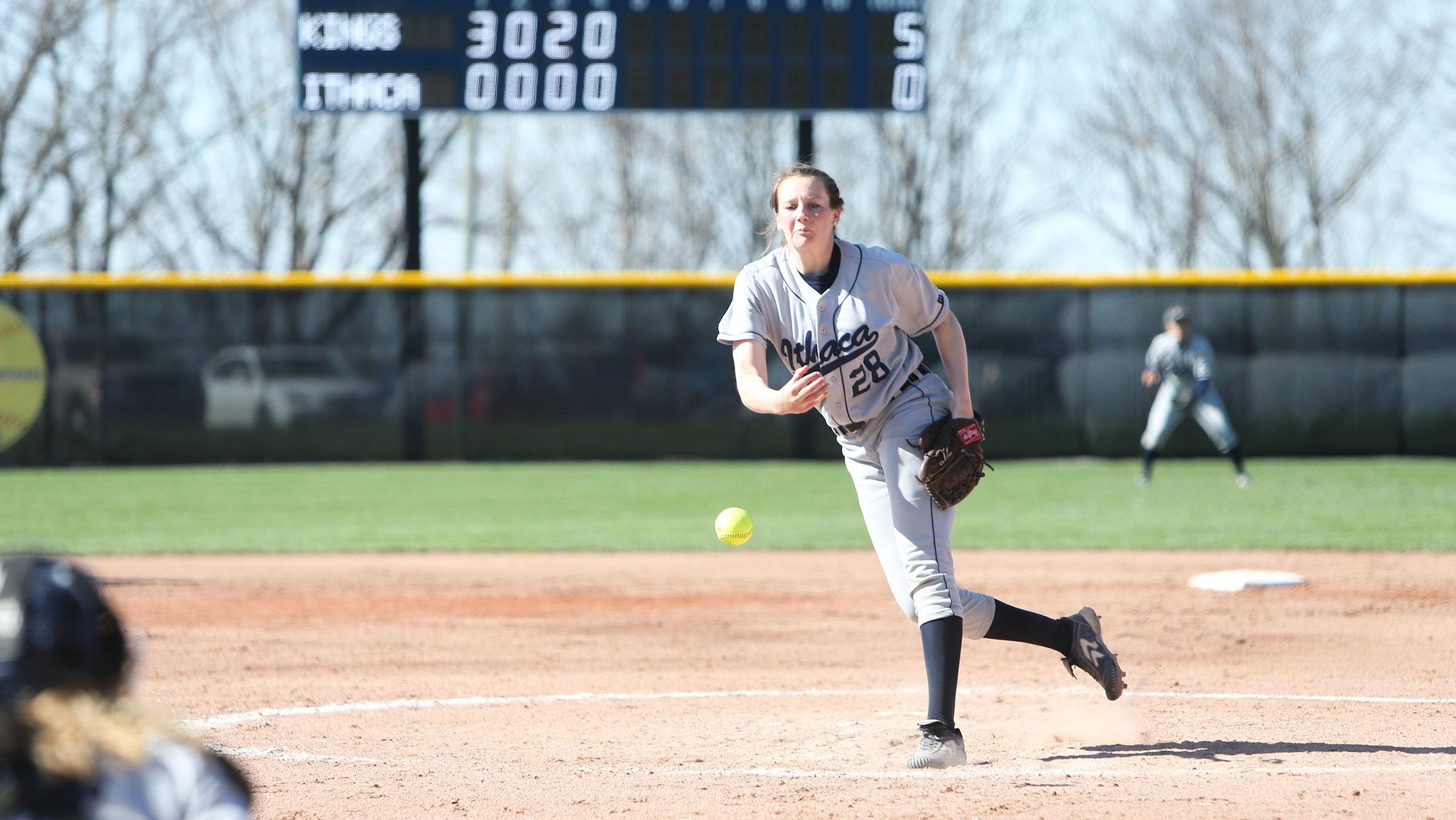 The softball team’s pitching staff is looking to continue the same stretch of dominant pitching as in year’s past, despite losing one of their best pitchers in the last decade and a key leader the past four years in Sam Bender ’14.

After pitching in 159 of the 270 total innings for the Bombers last season and accounting for 70 out of the 140 total strikeouts, Bender defined the stereotypical word “ace.”

However, with the Blue and Gold losing Bender to graduation, the softball team is scrambling to find a new leader for its pitching staff to rally around this season.

The pitching staff returns its second- and third-best starting pitchers in juniors Laura Quicker and Allison Macari. The South Hill squad also adds freshman Payton Cutting to round out the staff for 2015.

Head coach Deb Pallozzi said the pitching staff has a good mixture of youth and experience heading into conference play.

“The pitchers are working hard and making improvements,” she said. “They’re taking the right steps in improving their game.”

In addition, the pitching staff will also have to overcome a shorter rotation this season. In 2014, the team was led by a three-man rotation, however, so far this season Pallozzi has only used two of her starting pitchers in games.

Through the first eight games of last season, the pitching staff has averaged a 1.53 earned run average combined. Going with a three-man rotation last year, Bender started four of the first eight games. Macari and Quicker each started two games with the team as the Bombers held an 8–0 record at that point in the season.

This year, the staff, featuring Macari and Quicker as the go-to pitchers, has an ERA of 3.41 through the first eight games. Each pitcher has pitched four contests as the Bombers face a team record of 2–6 so far.

The next person that even comes close to Bender’s numbers last season is Quicker, who pitched in 69 innings, also contributing with 36 strikeouts.

Despite cashing in most of the team’s innings and recording many strikeouts, senior catcher Monica Capolongo said the most important thing the team lost with Bender was her leadership, stressing that the void Bender left can be filled.

“She was our leader pitching wise,” she said. “But nothing has really changed much because our current pitchers are very experienced and quickly taking over that go-to position.”

Macari said she feels this year’s pitching staff knows they will need to bring in a group effort in order to be successful.

“There is a different dynamic this year from last year,” she said. “We were all learning following Sam’s lead. Now it is a team-leading mentality, we are all pushing each other.”

Quicker said she shares the same sentiment as Macari about learning from Bender that will only benefit the staff for future years.

“I think being under Bender for two years really helped because she was that experienced and that role leader,” she said. “I think learning from that, me and Al are pretty prepared to take it on now that we’re upperclassmen.”

So far this season, Bombers pitching has been mainly Quicker and Macari going back-to-back with Cutting coming in relief.

Capolongo said it’s too early to tell how the staff will perform because they haven’t played many games yet this season.

Quicker also said bringing Cutting along to show her the ropes will help in future situations.

“I think that me and Allison are good working together because we have been for three years now,” she said. “Bringing Payton along as that third person is a good mix of the three of us.”

Macari said the pitchers are mentally ready for the workload ahead despite the increased amount of work.

“The bullpen was majority underclassmen, so I think now that we lost Sam, everyone else realizes that they have to step it up,” she said. “It’s not one person that needs to do everything and needs to have all the weight on their shoulders.”

One way the pitching staff has been stepping up so far this season is by overcoming only being able to practice indoors due to the weather.

Quicker said they are able to make the best out of the situation, despite experiencing, what Capolongo described as “cabin fever,” over the course of the last few weeks.

“It’s not really affecting us,” she said. “We can throw indoors and throw live so we’re not really struggling with that.”

Macari said they need to play out the process to win the World Series, but their goal for their season is to go farther than expected by reaching nationals.

“The goal is to go to Nationals and eventually win, but first our goal is to host Empire 8s, win that and take it step by step in the postseason.”