From the farm to the fork 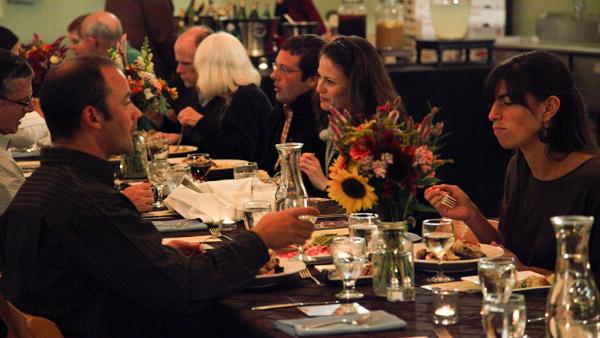 Michelle Boulé/The Ithacan
A seated dinner of 20 guests enjoyed a Farm and Fork dinner made from locally grown food provided by Silver Queen Farm on Sept. 19. Farm and Fork dinners are held every month from April to December since their debut in July 2011.
By Amanda Hutchinson — Contributing Writer
Published: October 4, 2012

Under a wooden cathedral ceiling draped with strands of Christmas lights, 20 dinner guests seat themselves at long tables graced with glass vases of wildflowers. Wine glasses are filled with the best of local vintners and swirled as conversation begins.

The waitstaff slides full baskets of fresh bread and plates of tapas, featuring freshly picked produce, during the discussion. Though the elegant setting may look like an uptown bistro or winery, Silver Queen Farm’s newly constructed barn is the ideal location for a dining experience that is growing in popularity in the Tompkins County area.

Silver Queen Farm, on the western edge of Trumansburg, is one of more than 10 farms in the Tompkins County area that have joined in the farm dinner trend. Once a month during the growing season, farms host dinners that feature local produce, meat, dairy and wine. Gordie Gallup, owner of Silver Queen Farm, said that the farm dinner was a long-time goal of his, and it has been well received.

“People are excited because it’s such a trendy thing,” Gallup said. “The people who are really into locally grown stuff and fine food really get a kick out of it.”

For the September dinner, pears were the featured item menu. As plates of Silver Queen’s pickled okra and Chateau Royal’s pheasant sausage were passed around, romaine salads with the featured grilled pears were quietly slid onto the tables as to not interrupt conversation. Glass carafes of water and more baskets of bread were emptied and refilled as the staff bustled back and forth from the kitchen.

Salad plates were stealthily replaced with plates of braised chicken on a bed of Silver Queen cauliflower, onions and collard greens, complete with a side of roasted fingerling potatoes. As the night wound down, tables were finished with slices of pear tarte tatin drizzled with cream and caramel sauces, sweetly completing the pear theme.

Silver Queen Farm joined forces with Ithaca’s Serendipity Catering in the winter of 2010 to create the Farm and Fork, which is dedicated to serving farm-driven meals on the property. But for Gallup, this is only the beginning.

“The ultimate climax or goal of [the farm] would be to have farm-to-table, a place where people could actually tour the farm, see how things are growing, then actually sit down and eat food that they’ve just seen how it was grown,” Gallup said.

Through a mutual friend, Gallup got together with the owners of the catering company, who were also interested in the pursuit of farm dining. The first Farm and Fork dinner debuted in July 2011, and the events have been held every month from April to December since.

Though the dates are pre-established as the third Saturday and Sunday of every month, much of the planning doesn’t happen until a week or two before the event in order for Kate Millar, general manager of Farm and Fork, to fully explore what’s fresh.

“Every month we go out to Silver Queen and see what’s growing, and we make a menu about a week in advance depending on what’s really fresh, what’s available,” Millar said. “You think about, ‘What’s a really great highlight this month? What does this month mean in Ithaca?’”

Many menu items are sourced directly from Silver Queen Farm, while others, such as meat and dairy, are sourced from other local farms. The menu identifies the farm from which each ingredient came. Millar inquires with local protein producers to see what’s available and abundant, and the venue features a bar with wines from around the Finger Lakes as well as local juices and Saratoga sparkling water.

After the featured food is determined, Millar uses that produce to form the backdrop image of the posters and flyers, which are distributed throughout Tompkins County and the surrounding area. Dinner tickets are sold for about $60, while brunch tickets go for about $30.

“There’s definitely a lot of loving labor put into the project,” Millar said.

In addition to the advertising, she facilitates the promotion of the events, selling the tickets through Ithaca Events, and prepares all the catering equipment. Serendipity Catering also does all the food preparation and cooking on-site at Silver Queen Farm.

The family-style appeal of both the Saturday dinner and Sunday brunch is a large contributor to the friendly atmosphere, as guests dine at long tables and mingle during the meal as well as on the farm tour.

The Sunday morning events often include live music and lawn games in addition to the meal and tour, and attendance is about 10 to 20 percent higher than the dinners, which average around 50 guests.

While farm dinners help the hosts by raising awareness of both their products and the process they go through to produce them, they also help the community by serving as charity events. Healthy Food For All, an Ithaca initiative directed by Elizabeth Karabinakis that combines nine local farms, uses the farm dinner experience to raise money so low-income families can have access to fresh produce.

“[Farmers] wanted to ensure that their high-quality, good food was reaching everyone in the community, regardless of income,” Karabinakis said.

The initiative created the program to allow families to purchase shares of the farms’ produce, which ensures that the family has fresh fruits and vegetables and the farm has financial support. Their monthly dinners were started in 2008 as a means of fundraising for the purchase of more than 100 shares for low-income families.

The ultimate climax or goal of [the farm] would be to have farm-to-table, a place where people could actually tour the farm, see how things are growing, then actually sit down and eat food that they’ve just seen how it was grown – Gordie Gallup

While the trend is big in the Ithaca area, other regions of the U.S. are seeing similar success. The Denver Post featured a $210 dinner at the Isabelle Farm in Lafayette, Co., which showcased products from eight different farms. Guests who attended that dinner praised the freshness of the meal as well as the overall experience. Millar attests that Farm and Fork meals have been received with similar remarks.

“I’ve never had a course that wasn’t very well received,” Millar said. “For example, I know we’ve done an appetizer that was zucchini and corn fritters, and they’re just popping with fresh corn — they’re so sweet.”

Gallup said that local guests who are interested in the local food scene often bring out-of-state guests who may not have the opportunity to witness the farm-to-table style of dining. The variety of produce available also draws these people, as they may not have access to the same kinds of fruits and vegetables.

“For somebody who lives around here, it might not be all that exciting,” Gallup said. “But for somebody that lives in a totally different environment, it’s actually a fairly exotic kind of experience.”