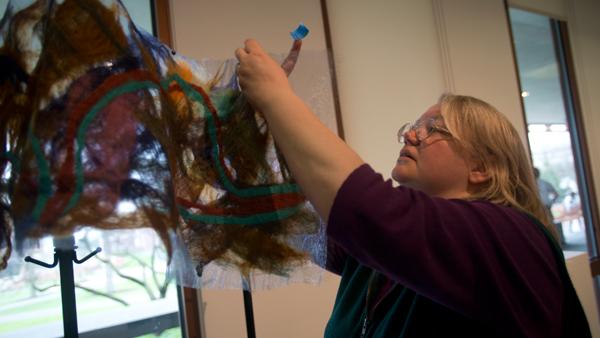 Rachel Woolf/The Ithacan
Senior Hildy Mica mounts her piece, “Book,” which is made of organza fabric and wool felt, in the Handwerker Gallery on Tuesday. “Book” is part of the senior art show, “ARTiculated.”
By Evin Billington — Staff Writer
Published: April 18, 2013

A life-sized, rainbow-streaked crayon hand mold is rubbed against a sheet of white paper, leaving a trail of colorful markings on the blank page as the crayon hand slowly deteriorates. This is “Erosion,” a sculpture created by senior Martin Brown that will be featured as one of 30 student artists’ work in this year’s annual senior art show, “ARTiculated,” curated by senior Leaf Ye. It is a collaboration between the department of art and the department of cinema production media arts. The show will be in the Handwerker Gallery from April 18 to May 19.

As curator, Ye organized and mounted all of the artwork. She said one of the main differences between this year’s senior art show and last year’s shows is the amount of photography it features. There are not many paintings or drawings, she said, which created a challenge in setting up the show.

Ye said she wanted this year’s show to have a central theme to connect all of the artwork. All the previous senior art shows, she said, have had no solid connection between the pieces, so this year she decided she wanted all the pieces to tell a narrative story.

“I was thinking I needed a name that is big enough to cover lots of things,” Ye said. “But it [couldn’t] be too big, too empty and end up saying nothing, so the breakthrough was that I see the parallel between the visual narrative and the literary narrative.”

Brown said he created his crayon hand piece, “Erosion,” after seeing a piece of artwork that was two graphite hands twisting toward each other, slowly wearing away as a pencil would. He wanted to create a similar decaying piece for the art show, so he began experimenting with melting crayons.

“I liked the idea of the hands just wearing away,” he said. “I did a previous project with crayons, where I was melting crayons in water, and I liked how you melted them. The colors flowed and created these whole new color combinations you couldn’t even have planned.”

To create the piece, Brown created a cast of his hand and melted dozens of different colored crayons into the mold. He attached that to a steel beam and a motor so the hand could move around the blank page that was mounted on a black ramp to produce a new work of art.

“I used steel, wood, crayons, this motor was another medium, there’s paper, there’s paint, so I had to bring in a lot of skills as far as technically doing this,” he said. “I definitely made it a challenge, but then I also think it’s one of the more finished pieces I’ve done.”

Ultimately, Brown said, the story his artwork tells is similar to life. It tells the story of erosion and decay, and how the destruction of one thing can create something else that is equally as beautiful.

“So, starting from the crayons, I took this art object, destroyed it and made this hand, and then, in return, this hand is hopefully going to wear away and leave its matter and energy in a new form on the paper,” Brown said. “And that’ll be the end of its story, but I think it’s a similar story to life and all matter on earth.”

Not all seniors who submitted art for the show are art majors. For art students, the requirements for submitting a piece of art were the student must be a senior and must have taken at least two semesters of art classes. For CPMA students, they must have been enrolled in fall 2012 or spring 2013 Senior Project class. Many students, Ye said, majored in other things or had double majors in art

and something else. She said the artists’ other focus often will appear in their artwork.

Senior Julie Schaeffer has three pieces in the show. She is an art major, but she is also on the basketball and crew team at the college, and she said her passion for athletics usually shows in her art. She said the human body inspired her in two of her pieces, which are untitled. She said her favorite piece she has in the gallery is a watercolor world map she painted, called “Transcending Borders.” An outline of feet is embroidered over the map in red thread, which she said represents the metaphor of having the world at your feet. She said she wanted the watercolor to “represent transcending boundaries and overlapping spaces.

Ye said she hopes visitors to the gallery will see the variety of talents the college’s senior artists have.

“I want them to be able to appreciate all the talents that Ithaca students have, because we really show lots of variety and skills and very, very interesting artistic concepts,” Ye said. “I want them to spend more time really looking at each piece very carefully. I want them to enjoy individually and then enjoy the whole space as a whole.”