Every word in the English language: the interview 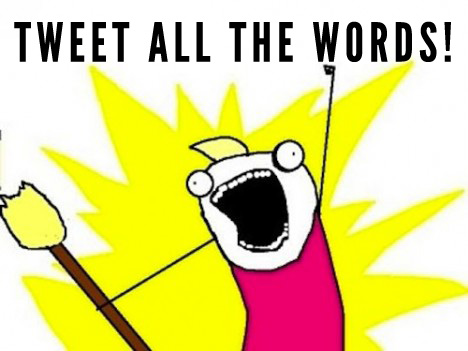 Creating content for the Internet often feels like shouting into the abyss. In putting yourself out there, you feel all at once very brave and intensely pathetic. “Do you like this infographic I designed?” “I would like a novelty book deal!”

More often than not, your cries are met with terrible silence. No appreciation, no anger, no reaction at all— just the bleak and overwhelming apathy of, say,  your fellow redditors. But every so often, one man has the courage to face down the blackness. To boldly stare right back into the void and, with total conviction, declare:

The description of the twitter account is simple enough: “Twittering every word in the English language. Task will complete in 2013.” At the time of this writing, @everyword has spat out 78, 627 alaphabetically-ordered single-word tweets, the most recent of which is “reducibility.” At the rate of about two Tweets an hour, I assumed @everyword was run by a Twitter program. A digital Oliver Twist— or, perhaps more accurately, a twittering Wall-E.

Luckily my fears about an orphaned Twitter account were assuaged when I got in touch with software designer, occasional NYU professor, @everyword creator and all around smart guy Adam Parrish.

Parrish tells me @everyword began in November 2007,  “Long before Twitter had gone “mainstream”,” he points out.  “There was a sense of infinite possibility around the platform, and it was easy enough to just take whatever random idea you had for interacting with the Twitter API and run with it.”  Parrish programmed a Python script, attached it to a word list, and @everyword was born.

“I thought it was kind of a hilarious idea, a reaction to/magnification of that omnipresent complaint about Twitter: that it’s full of nothing but needlessly laconic, context-free noise. But I also had a poetic motivation, which was to see what happens when you take all of these words…and spread them out over time, inserting them at random into something that people read every day, like a Twitter feed. What would it be like to read something like that?”

A lot like having the word “rectus” inserted between the New York Times politics section and your ex-roommate Tweeting about mac and cheese, actually. While Parrish is “a little bit [bewildered]” at the 17,000 twitter followers he’s garnered, he’s quick to point out that’s only a fifth of what @horse_ebooks has. “So there are still larger goals to shoot for. I’m coming for you, @horse_ebooks.”

While I assumed that the regularity of @everyword’s tweets was more likely evidence of a well-programmed twitter account than some Webster’s-obsessed Howard Hughes character compulsively tweeting in a boarded-up Victorian-era mansion, not everyone shares my commitment to the mundane. Parrish tells me,

“A producer from CNN’s Anderson Cooper 360 called me about a possible piece/interview on the show; as soon as I mentioned that the [tweeting] process was automated, and I wasn’t some bleary-eyed beardy obsessive hunkered over a keyboard and a Red Bull tweeting at all hours of the night, she promptly ended the call.”

Now about that word list. Before I spoke to the man behind the @everywod curtain, I found one portion the account’s claim rather hefty— every word in the English language? All of them? Even modern additions like “vlog” and “screensaver” and “bootylicious”? I had to ask him, what’s his source for “every word in the English language?” An encyclopedia, a dictionary, what?

“Part of the idea behind @everyword is to show how weird the idea of a “canonical” list of English words is anyway. So maybe it’s okay that I don’t, uh, remember where I got that particular the word list. Somewhere super legitimate, though, for sure.”

When you’re faced with that kind of certainty and legitimacy, dear reader, there is only one thing left to say to the subject of your interview: