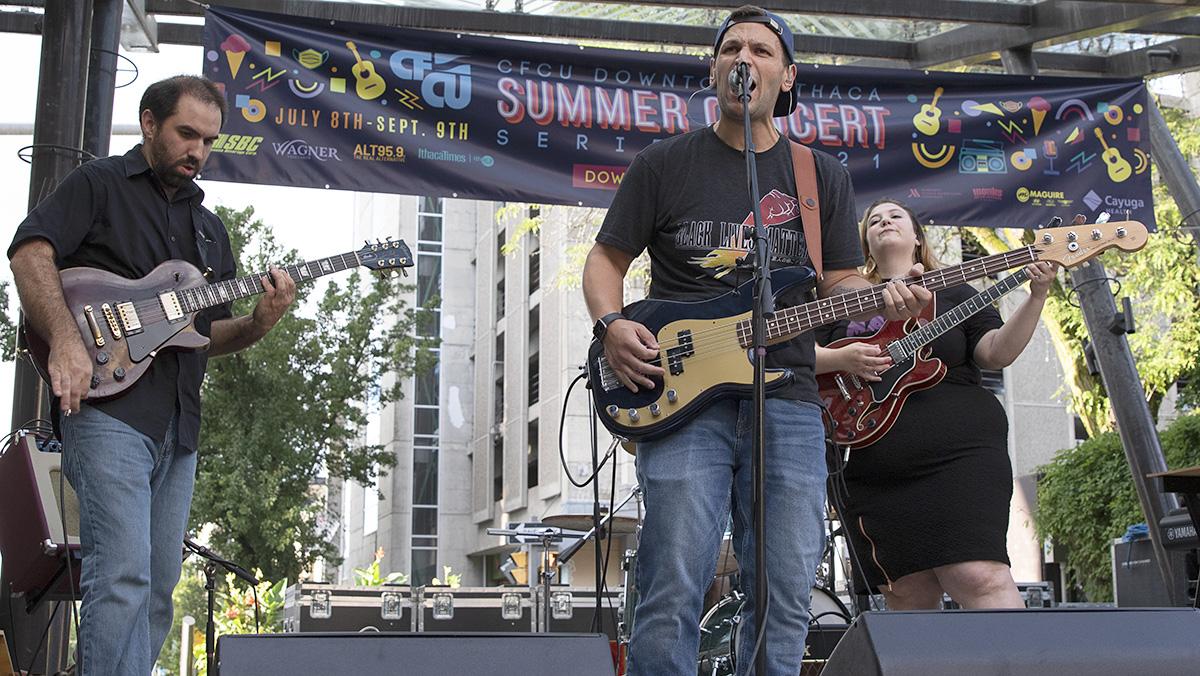 Underneath a pink and orange stained sky, the sound of laughter echoes all through The Commons, all the way up to the Bernie Milton Pavilion. Elderly couples recount their youth while children joyfully run and play, all to the soundtrack of live outdoor music.

Every Thursday night from July 8 to Sept. 9, the old bohemian souls, the hip, teenage youth and carefree children of Ithaca come together to share a night of music, dancing and fun. The CFCU Downtown Summer Concert series has returned to the Bernie Milton Pavilion for weekly performances, in person. While Fall Creek Brass Band had a performance on The Commons for “Make Music Day” on June 21, the concert series set the tone for other live performances this summer. The series has featured several local artists like Noon Fifteen, Fall Creek Brass Band, Plastic Nebraska, Empire Kings and Gunpoets, which play a range of different music genres, from alternative reggae to funk-blues to rock.

Darlene Wilber, the Downtown Ithaca’s communications and grants development director, said the performances usually feature artists from all over the country. This year, Wilber said the organizers of the series wanted to highlight local artists.

“We understood that they also took a hit,” Wilber said. “No one was able to perform the previous year and they lost a lot of paid gigs, so we wanted to help support them.”

The Downtown Summer Concert Series marked the first in-person community reunion, but performances at other venues, like the Sugar Hollow Music Festival at Hopshire Farm & Brewery and Firelight Live at Firelight Camps are scheduled to take place in August and September.

The band Gunpoets has performed at the concert series many times before and will be returning to perform Sep. 9. Frontman Daniel Lisbe said that the series provides support for the local music scene.

“We’ve been playing for over a decade and it has never once disappointed,” Lisbe said. “The support that the music scene gets from both local businesses and the community as a whole means so much to artists like us. It really makes all the difference.”

Before the majority of Ithaca was vaccinated, COVID-19 sucked the life out of the community. The vital events that tied its people together were now a health hazard. One of Ithaca’s most popular fall events –– Apple Harvest Festival, or Apple Fest –– was shrunk down to a smaller event called Apple Festive. Although this fall, Apple Fest may return, the occurrence of Ithaca’s annual Fall events is up in the air because of Tompkins County’s increasing rate of delta variant transmission. Most recently, a community favorite event, Porchfest, the annual music festival on the porches of the Fall Creek & Northside neighborhoods of Ithaca was canceled as of Aug. 19.

Wilber said the planning process for this summer’s concert series was much more complicated than in previous years. Her team had to adapt the concert format as the state guidelines changed. Wilber said that her team was not sure if it would be able to put together an in-person concert series or if it would have to hold it virtually like in 2020. However, as restrictions were lifted, they found a solution.

“When we are trying to figure out whether to go live or virtual or a combination of the two, we decided to go with a combination,” Wilber said. “We do have the live shows at the Bernie Milton every Thursday, but we also record them through Park Productions. So people can catch the show if they can’t attend on the Thursday shows.”

“Everybody’s taking it very seriously, but at the same time, it’s a really fun atmosphere,” Brindisi said. “It’s been a great experience, [they’re] very passionate about the locals and the music scene, which is always great.”

Brindisi said also that filming live performances gives the students in Park Productions the freedom to get creative with their shots and that the performing artists often use the footage that the production crew captures for promotional material.

“A lot of the bands are just super psyched to be performing again, because of the pandemic,” Brindisi said. “But also … getting footage, as [high] quality as Park Production supplies … is hard to come by. So a lot of them are just super psyched … all parties involved, really allow us to let our creative juices flow and try different camera angles. So that makes it a lot more fun as well.”

Wilber said the concert series has something for everyone, offering an array of different activities along with watching the performances. There is a beer garden for adults over the age of 21, cornhole games and a balloon animal artist for children who attend the performances.

“It’s like a nice community party,” Wilber said. “We were separated, and in isolation for so long, to be able to bring the community back together, and to celebrate local music … it’s definitely a really great year for this.”

Tompkins County-based band Plastic Nebraska performed at the concert series Aug. 12. Though the band has been performing in Ithaca for a while now, drummer Brian Dulda said that this was the band’s first live performance since July 2019.

“We’ve performed in Ithaca for years, at every venue and festival in the area,” Dulda said via email. “But this was our first [live performance] since July of 2019! It was wonderful to perform for a crown again.”

Dulda said the band was unsure what its first performance back would be like, but was pleased with the turnout the set received.

“We didn’t know what to expect, especially with the forecast, but we were pleasantly surprised with the turnout,” Dulda said via email. “And it was a HOT day. I feel like we fed off the energy of the crowd, and that is always nice.”

Ithaca College junior Ellie Swanson said via email that she has missed the music scene in Ithaca and that she was glad to see the community come back together.

“It was amazing to be back at a live performance, I’ve missed the music scene and am so glad that it’s back,” Swanson said. “The Ithaca community is so fun and relaxed. You can tell that people are thrilled to be there.”