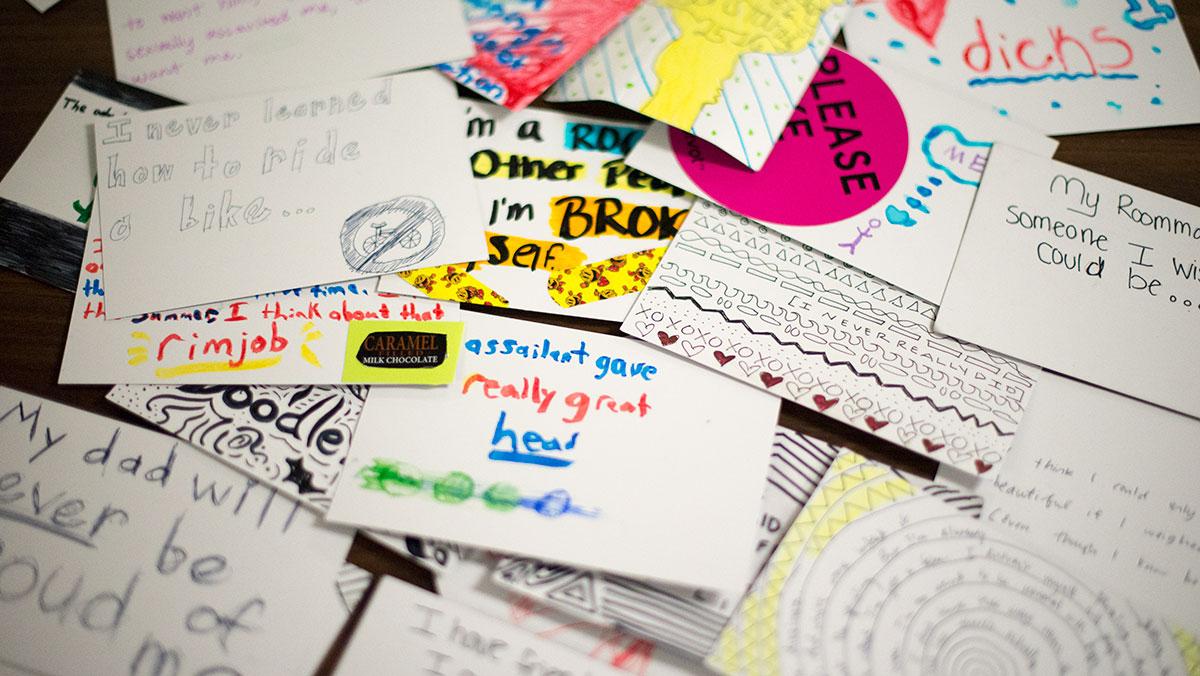 Tommy Battistelli/The Ithacan
Participants of PostSecretU submit their secrets on post cards provided by the program. These submissions, among others, will be displayed as part of an art exhibit Dec. 8 in Emerson Suites.
By Mary Ford — Staff Writer
Published: November 19, 2014

Whether they’re embarrassing, incriminating or simply private, everyone has secrets. However, rather than leaving them forever unexpressed, an art project new to Ithaca College and organized by Active Minds at the college is giving campus community members a chance to turn their previously untold thoughts into art.

PostSecretU is a program that collects secrets submitted anonymously on the backs of postcards. According to the program’s website, It’s designed to allow students to feel safe expressing themselves, to help students relate to one another on a more personal level and to raise awareness of college students’ mental health.

Collection boxes for postcards can be found in the Writing Center, the Student Activities Center, the Cerrache Center, the Information Desk and the Ithaca College Library. Active Minds is gathering submissions until Nov. 30, and on Dec. 8, it will host an art gallery in Emerson Suites displaying all the secrets it received.

PostSecretU is a subgroup of the original PostSecret, which began in 2004 when founder Frank Warren placed a classified ad in his local Baltimore-area newspaper asking people to send him their secrets. Since then, thousands of people have participated, and secrets are updated on PostSecret’s blog every week. Based on PostSecret’s success, Warren created PostSecretU as a version of his project that stays contained within college communities. To do so, he partnered with Active Minds, a national mental health awareness group for college students.

Jared Wolf, events chair for Active Minds at the college, said he wanted to bring PostSecretU to the college ever since he first heard about the program.

“I’ve been a big PostSecret fan myself, so I’ve been really interested in seeing ‘What would that look like on the IC campus?’” Wolf said. “There’s a unique sensibility on this campus in terms of creativity and diversity of experience. Seeing what people come up with and what people are willing to share will be such an eye-opening thing for this community.”

To organize the event, Active Minds at the college purchased a PostSecretU kit from the national Active Minds organization. The kit contained posters, a guidebook for marketing the event and 2,000 blank postcards. The postcards are being distributed on posters across campus, and some professors handed the cards out to their classes.

Susan Delaney, an assistant writing professor, encouraged her students to participate in PostSecretU because of its potential mental health benefits.

“So much of the stigma around mental health is due to secrecy,” Delaney said. “Until we are actually willing to be public and talk about things, or even just to be honest about we don’t know, we’ll never break down those stigmas.”

Jesse Rolfe, co-president of Active Minds, said this program is the first of its kind at the college.

“A lot of people have compared this to IC Secrets, but this is a more artistic movement and display that we’re trying to create,” Rolfe said. “It’s more of an art project. It’s both a way to express these inner secrets and to do it artistically. It’s a creative outlet.”

Cassie Walters, co-president of Active Minds, said students should look at the PostSecret website to inspire their own creative designs. She has been following PostSecret for years and hopes PostSecretU will have as great an impact on the community as it had on her.

“The one secret I read that always stuck with me said, ‘Everyone who knew me before 9/11 thinks I’m dead,’” Walters said. “Obviously they’re not all that intense but reading them can be really impactful.”

Several students have already submitted work to PostSecretU, and one of them said reading PostSecret for several years inspired her to create her own submission. The student wished to remain anonymous, and the stipulations of PostSecretU also require that all participants in its event remain anonymous.

“It’s just really cathartic to just put yourself out there,” the student said. “It’s been something I’ve been wanting to get off my chest for a long time, and I’m glad I finally did it.”

Walters said some of the most creative submissions may be published in the upcoming issue of “The Mirror Magazine,” a literary magazine published by Active Minds that focuses on themes of mental health. Active Minds’ goal is to help students relate to one another in a more meaningful way, especially if it enhances their mental health.

“Hopefully people will feel less alone in their secrets,” Wolf said. “That’s where the mental health aspect comes in. There’s a therapeutic element to sharing something artistically. It gives people an opportunity to connect with others without having to be vulnerable and afraid of judgement. There’s a lot of trust that goes into sharing a secret.”