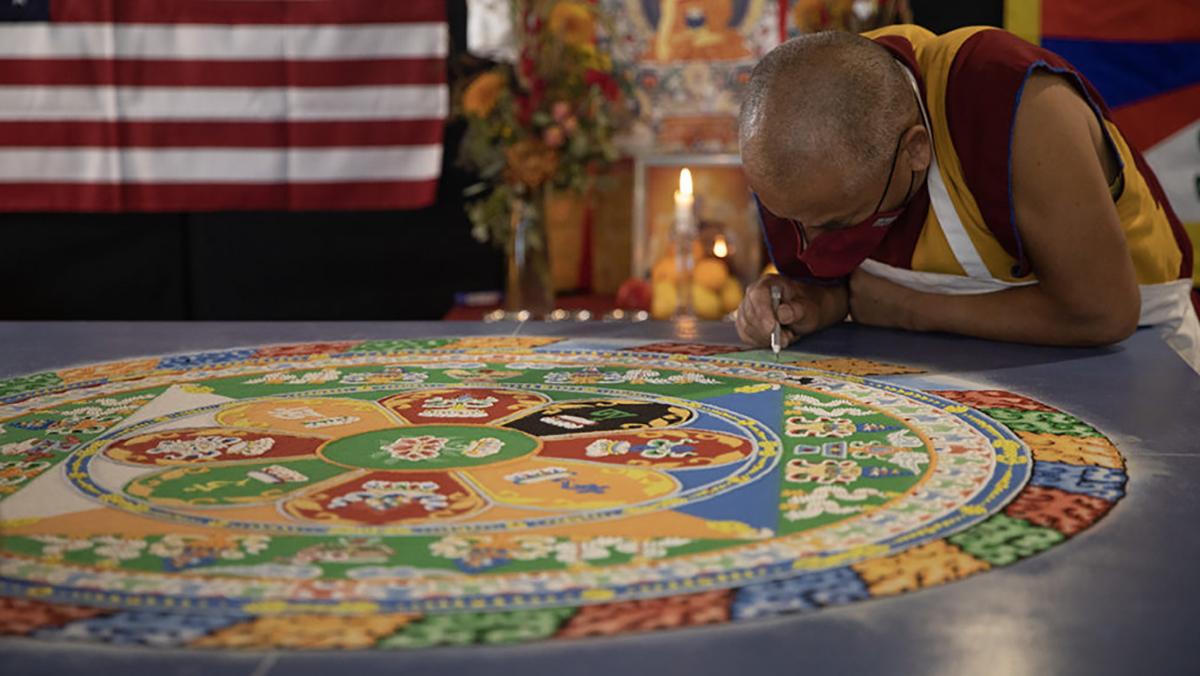 Jasmine Scriven/The Ithacan
Venerable Namgyal, a visiting buddhist monk, works on a mandala in the lobby of the Campus Center. The intricately designed mandala was created with colored sand and represents Chenrezig, which is recognized by Tibetan Buddhists as the bodhisattva of compassion.
By Prakriti Panwar — Staff Writer
Published: November 8, 2022

Two monks clad in red and yellow robes from Ithaca’s Namgyal Monastery Institute of Buddhist Studies bent over a square table as a crowd of curious onlookers witnessed them intricately create a multicolored mandala from Nov. 2 to 7 in Ithaca College’s Campus Center.

A mandala is a geometrical design made with colored sand and is usually found in Hindu, Buddhist and Jain cultures. Mandalas are made with funnel–shaped tools called chak-purs that disperse the multicolored sand grain by grain to create a pattern of squares and circles. Mandalas generally take several days to construct but are destroyed and dispersed soon after, which symbolizes the concept of impermanence — highlighting that many things in the world and in people’s lives are temporary. Mandalas also represent the home or palace of a particular revered deity. According to the mandala event website, practitioners use the mandala to envision, in their minds, the qualities of the deity who resides in the symbolic palace. 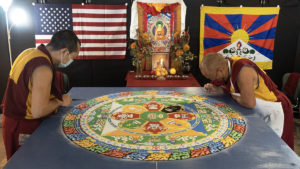 From left, Venerable Nyima Tsering and Venerable Namgyal work on the mandala. Following its completion, the mandala is destroyed to symbolize impermanence. Ray Milburn/The Ithacan

Eric Steinschneider, assistant professor in the Department of Philosophy and Religion, said he got the idea for the event when he took students from his Seeking the Buddha class to the monastery in Spring 2021. The Namgyal Monastery is the official and only seat of the Dalai Lama, who is considered to be the physical manifestation of Chenrezig, the Buddhist deity of compassion, in North America. The monastery was founded in 1992 as a branch of the main Namgyal Monastery in Dharamsala, India, as an academic hub for Western students to study Tibetan Buddhism within a monastery.

“It is a beautiful place and it is a sort of a hidden cultural treasure,” Steinschneider said. “When I went there, I was speaking with the administrator, and I said, ‘How would you like to come to our college and maybe build a mandala?’ And he said they would love that.”

Steinschneider said a mandala represents the universe in a more intricate way, conveying the idea that there is a structure to life, despite the unpredictable and chaotic world people live in.

Diana Dimitrova, director of International Student and Scholar Services, has been involved with the planning of the event from the beginning and said the mandala constructed in the Campus Center was a tangible representation of the Chenrezig deity.

“[It is] very sacred for Tibetan Buddhists [and] very important for everybody else who values compassion,” Dimitrova said. “The premise of watching this elaborate process of creating a mandala and then wiping it off clean also speaks to all of us in terms of impermanence. … I think that’s why these mandalas resonate with so many people.”

The six-day event was a collaboration between the President’s Office, the Office of Religious and Spiritual Life and the Department of Philosophy and Religion. Special events like movie screenings and public lectures took place alongside the mandala project for members of the campus community. On Nov. 1, a Tibetan movie called “The Search,” which documents the story of a film crew driving through Tibet to look for the perfect cast for their upcoming project, was screened in Clarke Lounge, followed by an interactive discussion led by Steinschneider. On Nov. 3 in the Klingenstein Lounge, Geshe Jamyang Dakpa, a senior teacher at the Namgyal Monastery, highlighted the institute’s history and values with the help of his translator, Palden Oshoe, which was followed by Steinschneider’s lecture called “Mandala and Meaning: Historical Perspectives.” 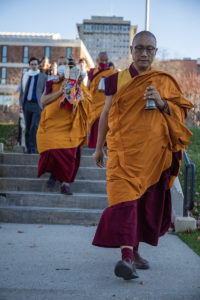 Geshe Jamyang Dakpa leads the other visiting monks from Namgyal Monastery Institute of Buddhist Studies and other Ithaca College community members to Muller Chapel, where the sand used to create the mandala in the Campus Center lobby was dumped in the pond. Kalysta Donaghy-Robinson/The Ithacan

At the public talk Nov. 3, Dakpa spoke about secular morality and said one does not need to be Buddhist to apply the religion’s value in their daily lives. Instead, he said that understanding one’s own emotions and introspection are key strategies for one to be a more enriched and enlightened being.

“Whoever may look at [the mandala] may not have much familiarity with the practice … but [simply] looking at it itself is to connect with the spiritual deities that are imagined to be in the mandala,” Oshoe said, translating Dakpa. “In order to enrich yourself with means to develop or promote greater morality is to know more about your mind. … The ultimate means for happiness needs to come from within, from your own mind.”

A livestream video of the event was also available on the college’s YouTube channel from 9 a.m. to 4 p.m. throughout the six days. Each day, there would be a meditation session open to all, preceded by chanting by the monks. The monks would chant in the morning before they started working on the mandala as well.

Sophomore Sarah Anhalt said she was fascinated by the making of the mandala and was curious to learn more about Buddhism. The intricate act of creating the mandala filled her with wonder, Anhalt said.

“I think the mandala and the traditions around it are absolutely fascinating, and I would love to learn more about them,” Anhalt said. “I love that the mandala was open [and] anyone can go and see it, watch it being made. … Everyone was so respectful. It was a great atmosphere [and was] very educational as well.”

Ron Liso, a local Ithaca resident who attended the public talk Nov. 3, said he enjoyed the enriching conversations that took place after the talk and was pleased to see the mandala in the Campus Center.

“I was here in Ithaca when the Dalai Lama came many years ago and they had a mandala at the Johnson Museum at Cornell,” Liso said. “And [now] we were having this wonderful discussion afterward about seeing the mandala and [drawing a] parallel to other religious traditions. Several of us grew up Catholics, seeing the host as the embodiment of God. And seeing the same thing, the same thought about the mandala being the embodiment of certain spiritual deities [was a parallel we saw].”

Steinschneider said one of the ways the team promoted the event was by scheduling the viewing of the mandala as a noon–hour event for the college’s first-year Ithaca College Seminar (ICSM) students. The event was open to the public, and local K-12 schools from the Ithaca area were also invited to see it.

The dissolution ceremony of the mandala took place at 2:30 p.m. Oct. 7 in the Campus Center and the Muller Chapel. The monks skillfully swept the mandala into a black vase, pinching out grains of sand from particular sections of the mandala first. They then led the procession of viewers toward the Muller Chapel pond where, after a short ritual, the sand was dispersed into the water. The ritual involved a round of chanting by the monks and the lighting of a fire. Ngawang Dhondup, administrator of the Namgyal Monastery, said the fire signified prosperity for the college and the town’s community. 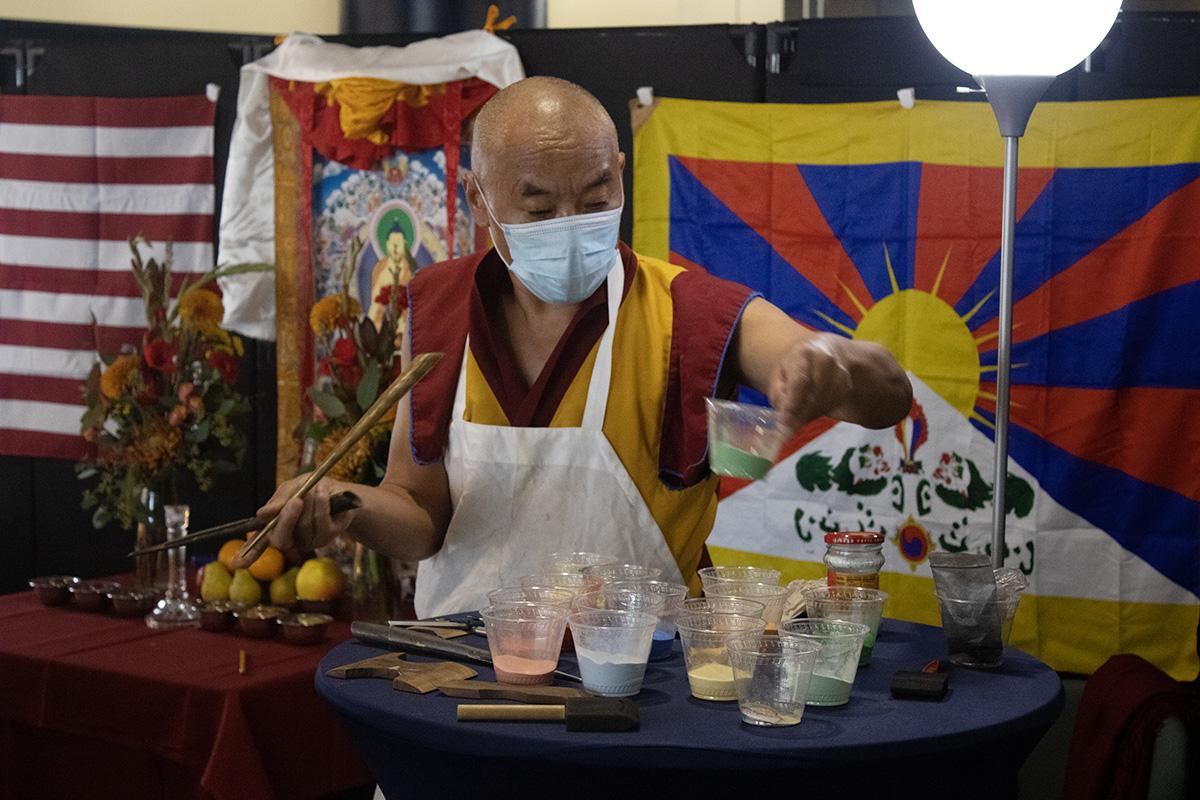 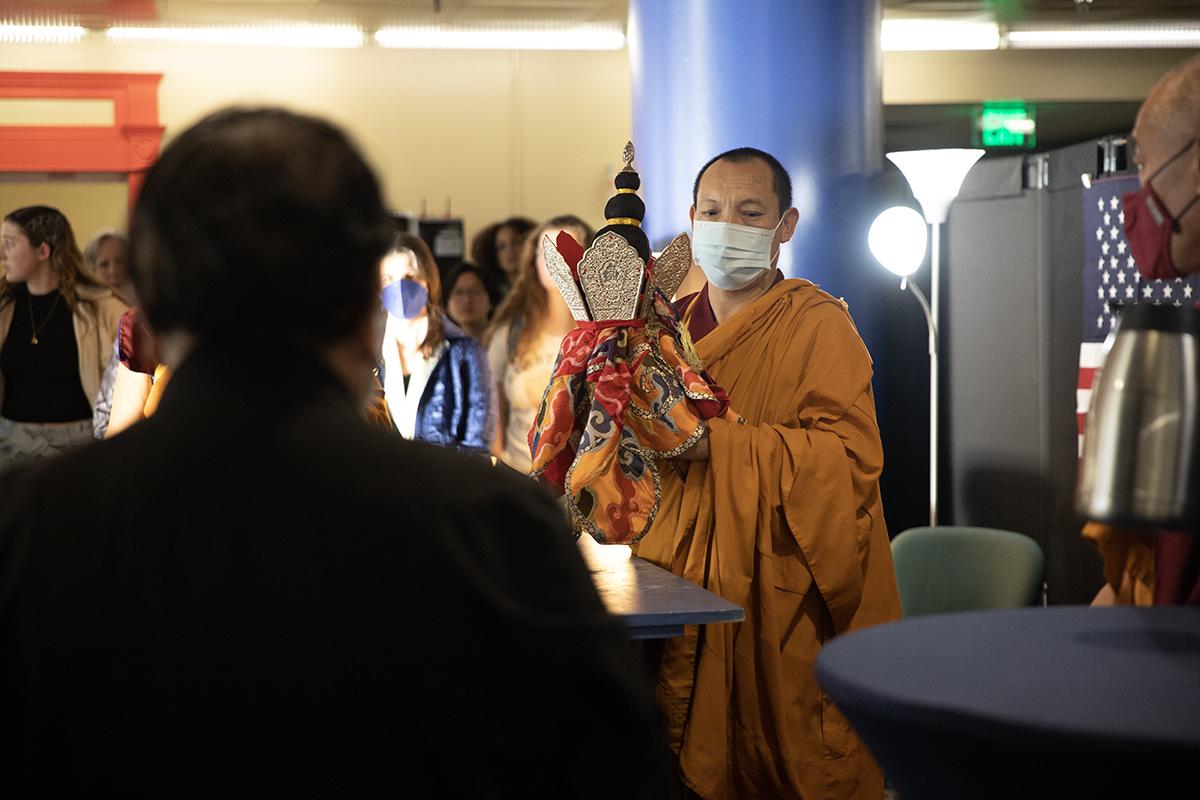 Venerable Nyima Tserig prepares the urn filled with sand used to create the mandala for transportation to Muller Chapel, where it will be poured into the pond next to the chapel. Daisy Bolger/The Ithacan 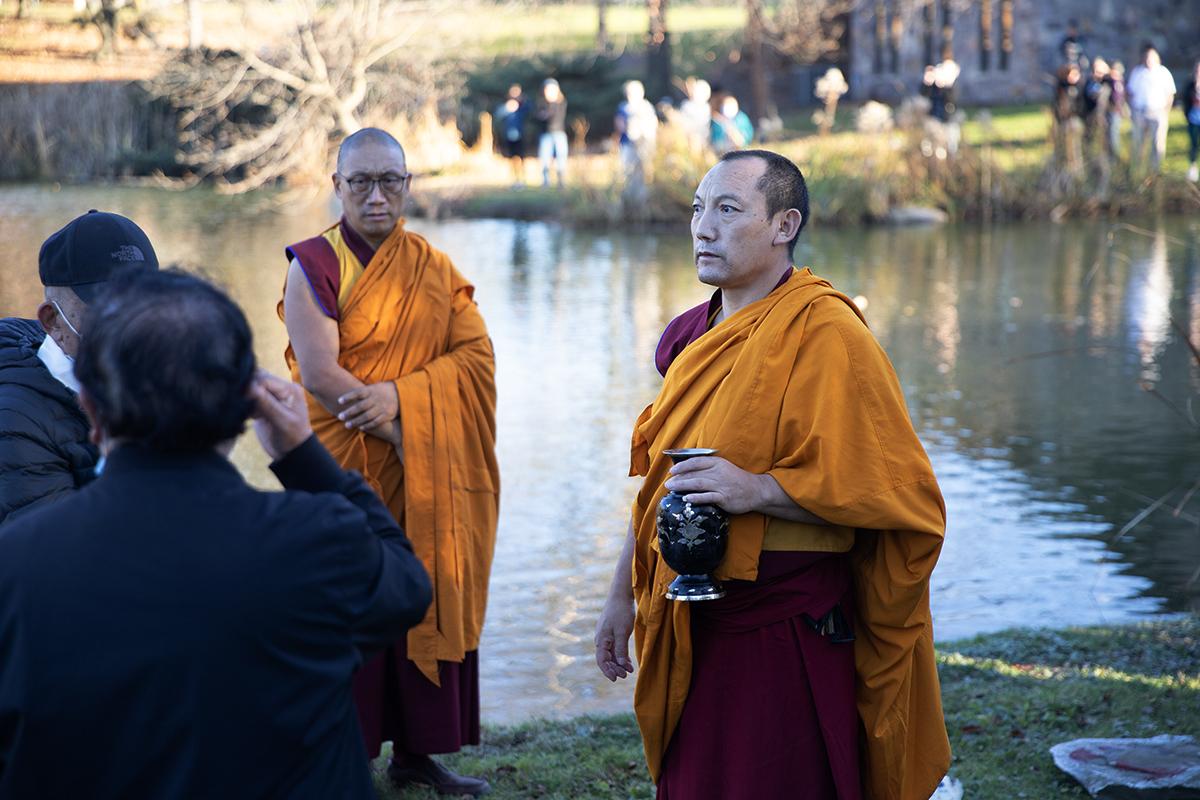 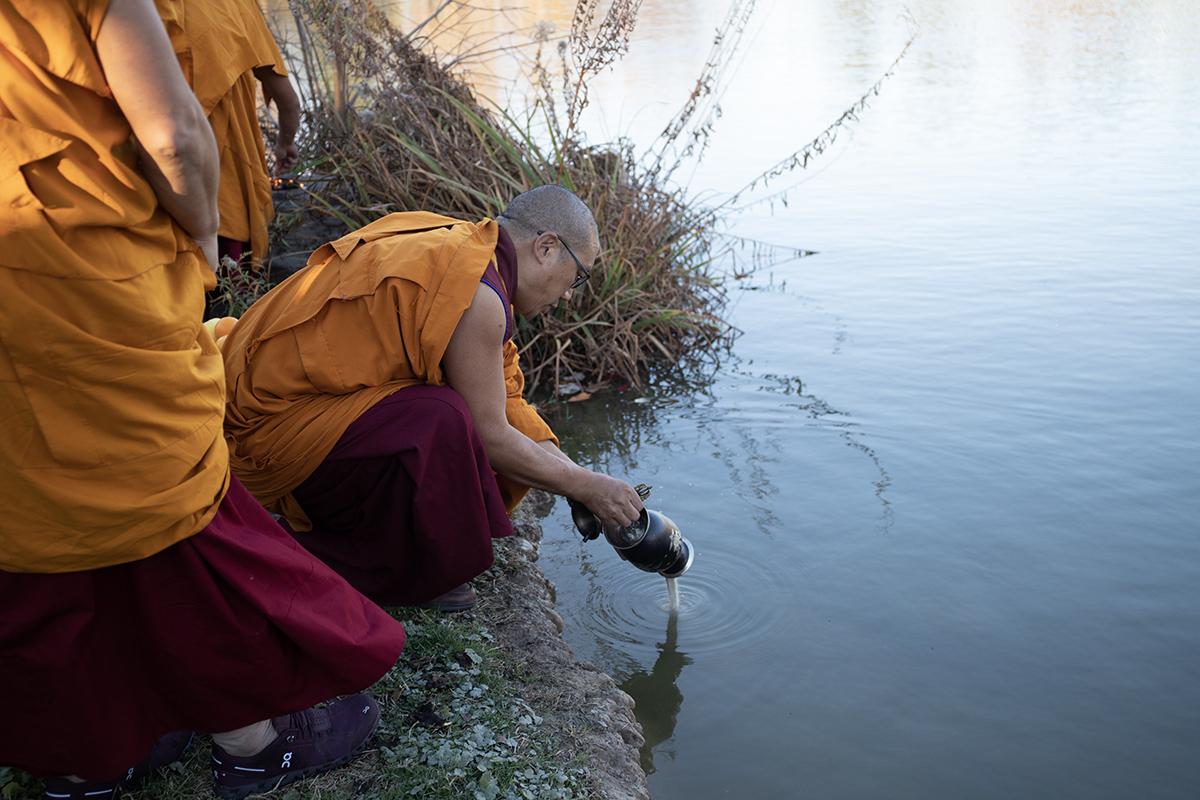 Geshe Jamyang Dakpa pours the sand used to create the mandala in the Campus Center into the pond near Muller Chapel on Nov. 7. Kalysta Donaghy-Robinson/The Ithacan

However, not all of the sand was poured into the pond. After the event formally ended inside Muller Chapel, spectators of the dissolution ceremony were offered small amounts of the remaining sand, in plastic containers, from the mandala. Dhondup said placing the container of the mandala sand at the entrance of homes will protect people from the evil and natural disasters. Dhondup said traditional Buddhists put this sand on the crown of their head and believe that it leads to them being reborn within 49 days, thus leading them onto the path of peace.

Steinschneider said he hopes that events like these will be beneficial to the college and local community.

“We are going through a very challenging time as a college and as a community and as a country as a global community,” Steinschneider said. “I hope that events like this can help bring people together and spark interesting conversations and hopefully spark people’s interest in new and perhaps unfamiliar cultures.”