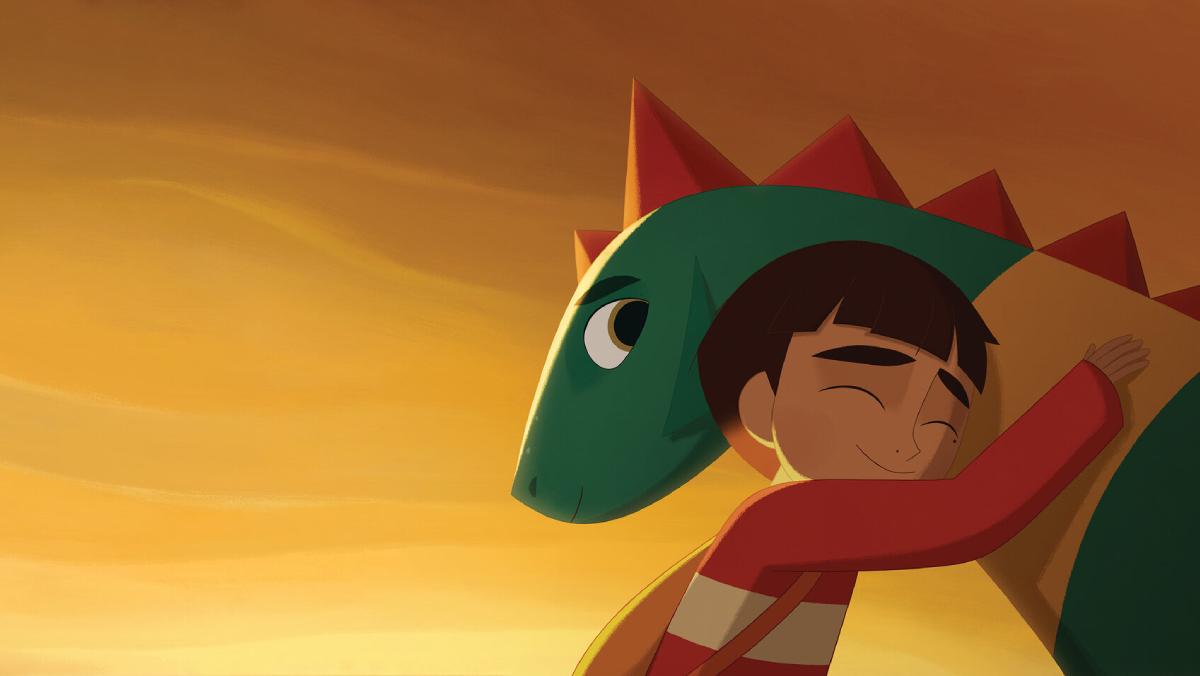 Courtesy of Netflix
Elmer (Jacob Tremblay) gets swept up in a rescue mission for a dragon (Gaten Matarazzo) in "My Father's Dragon," a film that sadly doesn't reach the nuance and complexity of recent animated films.
By Patrick Mazzella — Staff Writer
Published: November 28, 2022

“My Father’s Dragon” is the newest animated film from Academy Award nominee Nora Twomey, known for her films “The Breadwinner” (2017) and “The Secret of Kells” (2009). Twomey has once again partnered with Cartoon Saloon for her third feature, and despite crafting two stunning films with appeal to audiences of all ages, her latest outing does not hold the same weight.

The film follows Elmer (Jacob Tremblay) and his mother Dela (Golshifteh Farahani) as they struggle to leave their small town after their shop closes and adjust to their new life in the big city. As Dela struggles to make ends meet, she and Elmer get into a fight, causing him to run away and get swept up in a rescue mission for a dragon (Gaten Matarazzo) who has been imprisoned by the inhabitants of a hidden island.

Although the film contains interesting ideas, as it is an exploration of friendship and how to act in the face of crisis — something that has been present throughout Twomey and Cartoon Saloon’s past work — this film does not include the same level of nuance and complexity compared to the rest of the director and studios’ work. The plot remains very surface-level and catered just to children, which is uncharacteristic of Twomey and Cartoon Saloon’s films. “The Breadwinner,” Twomey’s last directorial outing, was so beloved because of the emotional maturity and depth it provided to the very sensitive issues that it touches on, like the Taliban’s control of Afghanistan and how a young woman struggles to make ends meet for her family. “My Father’s Dragon” lacks any of this and opts to tell a story with little depth beyond themes like the magic of friendship and how it is a good idea to work together to solve a problem. While these are respectable and important lessons for kids to learn, in an era of more complex children’s media being far more accessible than ever, this shallow look at the tough situations the characters are put in feels flat in delivery and not worth the 99-minute runtime audiences dedicate to this film.

The voice cast in this film excels, however. Despite some roles being quite small, the star studded cast also includes Dianne Wiest, Rita Moreno, Chris O’Dowd, Judy Greer and Whoopi Goldberg. Even if much of the screenplay provides them with little to work with, the supporting cast lifts the film out of the realm of utterly boring. Wiest and Greer especially exude charm in their roles, making scenes with them much more enjoyable than the remainder of the film.

Although the 2D animation is very smooth and almost always pleasant to look at, it doesn’t bring anything to the table that feels new or exciting. Films do not need to change the game in order to be worth an audience’s attention, but in an age with an ever expanding library of streaming services, hundreds of hours of content being uploaded to the internet each day — and boundaries constantly being pushed — it certainly does not help. Twomey and Cartoon Saloon have offered up films in the past that do just this, so it is unfortunate knowing that their success in making truly astonishing animation does not extend to their most recent film. Instead, “My Father’s Dragon” is just a lackluster and uninspiring take on a children’s movie everyone has seen before.