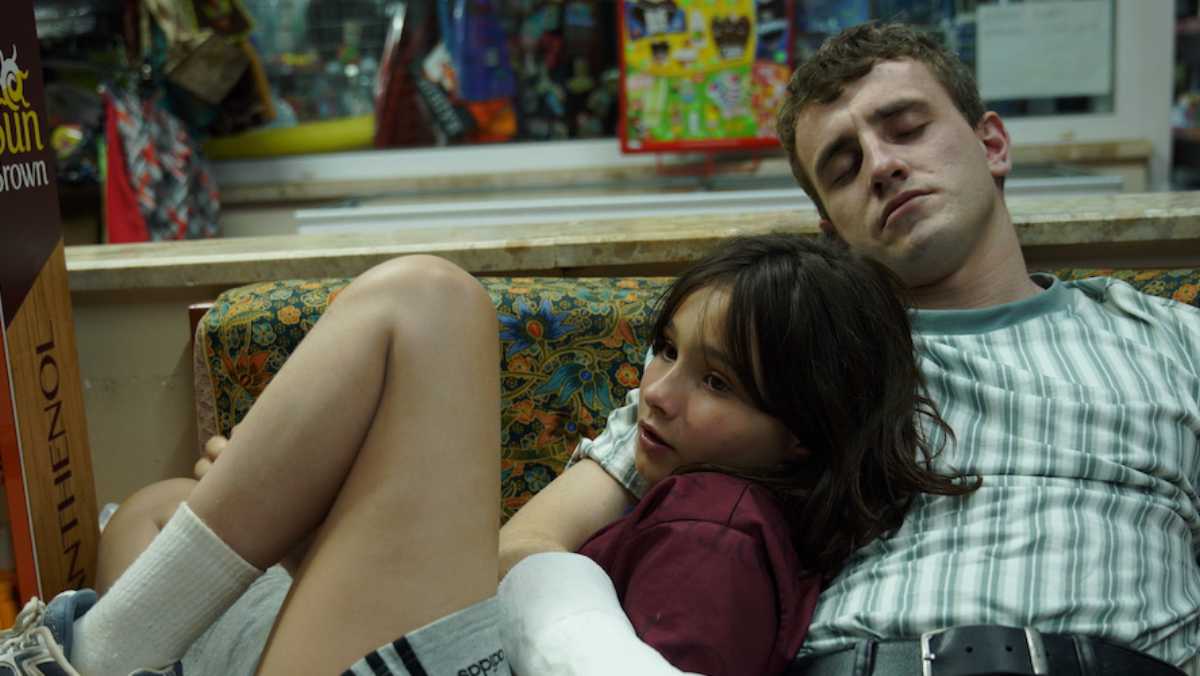 Courtesy of A24
From left, Sophie (Frankie Corio) and her single father, Calum (Paul Mescal), take a holiday trip to Turkey in "Aftersun."
By Giancarlo Messina — Staff Writer
Published: November 23, 2022

Charlotte Wells’ debut feature film “Aftersun” opens with a scene that, at first glance, seems fairly innocuous. It introduces the two main characters, a young girl named Sophie (Frankie Corio) and her single father, Calum (Paul Mescal). The opening scene, like many throughout the film, is shown through MiniDV footage. Sophie is filming her dad and mentions that she just turned 11 and that his 31st birthday is in two days (jokingly remarking that he is 130 turning 131). She then asks him what he imagined he would be doing now when he was 11 years old. The scene cuts before the audience can hear his response.

It is not until halfway through the film when the scene appears again; this time it is shown in full. It is now revealed that Calum refused to answer his daughter’s question. His mood has clearly changed somewhat, and he now tells Sophie to shut off the camera. However, even at this point in the film, the audience is not completely in tune with Calum’s mental turmoil. Therein lies the genius behind what Wells is able to accomplish with this film: it is never upfront about what certain scenes might be hinting at. Rather, it subtly builds toward a crushing finish, allowing the audience to fully take in the emotion every step of the way.

The simple father-daughter story is told during a holiday vacation in Turkey that the two of them went on. The story is framed through the MiniDV footage that Sophie, in the present, is watching as she reconciles with the memories of her father, who she never got to fully know. What the audience knows about Calum’s personal life is also limited. It is clear that he and Sophie’s mother are separated and that he became a father at a young age. It also seems that his life has headed in a direction that he did not hope for. The film is not worried about the fine details, though. Rather, it encapsulates a moment in time when the two of them shared a special bond together.

Wells is able to perfectly illustrate the feeling of being on a family trip through a child’s perspective. Most people can probably recount the memories of when they were a kid on vacation and the sense of wonder that it entailed, not having a full understanding of the world quite yet — just like how Sophie is not old and mature enough to fully grasp the inner workings of her father’s life. Still, she is able to connect with him on an emotional level. She feels somewhat alienated when hanging out with the older kids at the resort, whose behavior seems totally new but also enticing. Wells, as a female director, provides a strong female perspective on the themes of depression and grief. The entire film is through Sophie’s perspective, both young and old, and her view of her father. Wells gives a brutally honest portrayal of male depression, which is brought to life by Mescal’s brilliant performance. It is clear that whatever emotions Calum was experiencing during this time, he was attempting to bottle it up. This is told partly through subtle hints of dialogue but also through Mescal’s body language. He often appears dejected or worn out, as if his only motivation is the love he has for his daughter.

The film is also visually stunning. With cinematography done by Gregory Oke, there is a soft saturation throughout the film that gives off a sense of warmth and calm. There is also strong emphasis on reflections, as there are many sequences that are shown through the reflection of a mirror, television screen, etc. The soundtrack is also used in an inventive way that helps to highlight the emotions of certain scenes. Particularly, the use of Queen’s “Under Pressure” toward the end of the film is boldly done and brings the film to a shuddering climax.

It is possible that not everyone will be as taken by Wells’ beautiful and haunting story, but it is hard to deny its achievements. There are very few films that portray themes of grief in such an open and human way. Once it is over, the viewer will want to go back and experience it all again, just to pick up on all the minute details that were missed upon the first viewing.