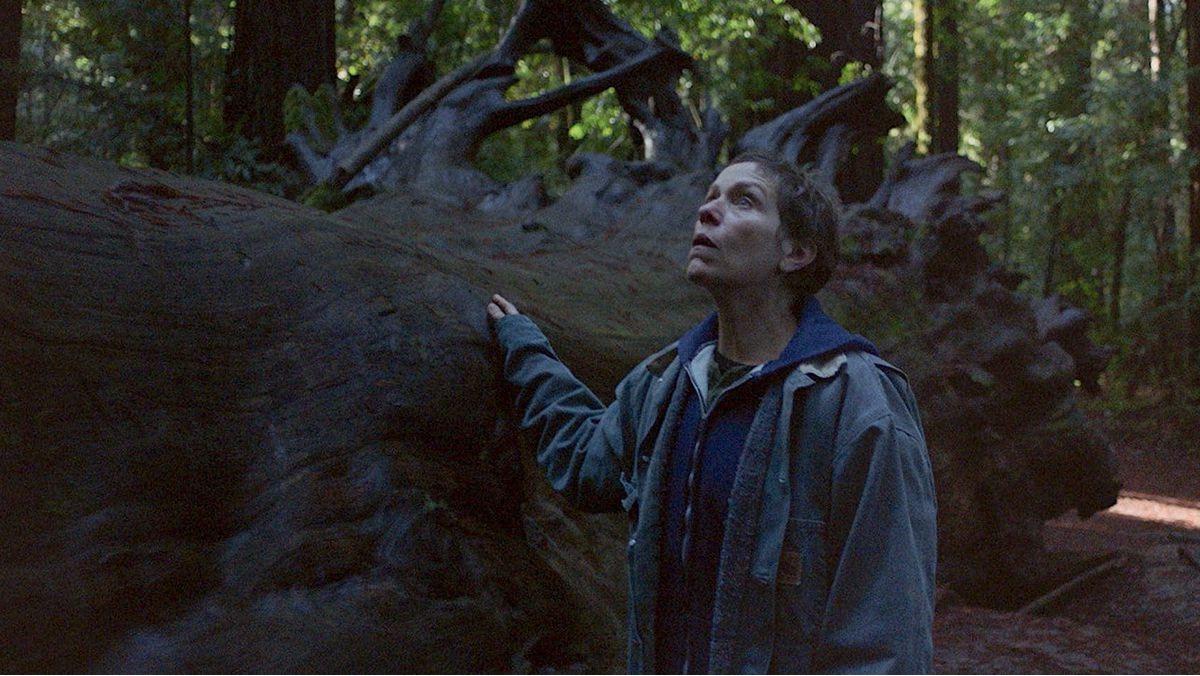 Courtesy of Highwayman Films
Chloé Zhao’s “Nomadland” is a slow slog through the desert with actor Frances McDormand. The use of a Hollywood name like McDormand makes the film feel less authentic than Zhao’s other works.
By Elijah de Castro — Staff Writer
Published: March 5, 2021

The America that appears in Chinese director Chloé Zhao’s films is the real one — the hollowed out, unemployed and abandoned America that has been consigned to oblivion, election after election. To create this slice-of-life portrait of the people of America’s dying heartland, Zhao uses an extraordinary dualistic combination of documentary and western. Her newest work, “Nomadland,” maintains her blend of reality and fiction but hits diminishing returns.

Frances McDormand plays Fern, an aging woman who loses it all in the Great Recession. After Empire, Nevada — the company town that Fern lived and worked in — turns into a ghost town, Fern gets in her van and hits the road. Her husband recently passed, leaving Fern to become a van-dweller, hopping from one job to the next along with a group of other vagabonds. From working at an Amazon fulfillment center to picking up trash in national parks, Fern will take any job.

Both of Zhao’s two previous films — “Songs My Brothers Taught Me” and “The Rider” — followed young Lakota Sioux characters growing up on the Pine Ridge Indian Reservation, the poorest county in America. Zhao’s cast for these films were the indigenous Lakota themselves, intentionally leaving the audience wondering how much is fictionalized and how much actually happened. In “Nomadland,” Zhao departs from this previous casting method, bringing in McDormand, a Hollywood movie star, making the film less of a documentary and more fictional.

McDormand, as always, is great. She is one of those actors with an unforgettable face that allows her to transform into almost any role — similar to how Willem Dafoe’s face works perfectly as both Jesus Christ in “The Last Temptation of Christ” and Spider-Man’s arch-nemesis, Green Goblin, in “Spider-Man.” McDormand’s acting power, in comparison to her recent performance as the grieving anarchist mother in “Three Billboards Outside Ebbing, Missouri,” is understated and reined in. Fern is a very accessible character for viewers, as there are probably thousands of other Americans experiencing her struggles across the country.

Beyond the concept and McDormand’s fantastic performance, “Nomadland” is unfortunately just about as arid and vacant as the desert that Fern spends much of the film driving through. In Zhao’s previous films, the actors were real people the audience had never seen, and this was enough to motivate the slow narrative on its own. The problem with “Nomadland” is that because it has McDormand — a well-recognized actor — there is now an implication that there should be an established plot. As a result, Zhao’s film struggles to figure out how much influence the story should have on her structureless style.

The outcome of this dilemma is a film with no meat on its bones. “Nomadland” is nearly two hours, yet most of the runtime is spent meandering. Fern doesn’t change or go through an arc by the end of the film. The people she meets, the places she visits and the jobs she works don’t give her new insights or realizations, creating a hollow, forgettable viewing experience.

To make matters worse, the film milks many scenes for emotion with an inappropriate and overemphatic piano soundtrack. During a scene at the end of the film, Fern simply driving through the desert turns into a try–hard attempt at getting the audience to shed a tear when simplistic, sappy piano chords begin to play.

The critical acclaim “Nomadland” has received suggests it’s on track to clean up awards shows this year. While name recognition for Zhao is a win, there is no doubt that the accolades “Nomadland” will receive are motivated by McDormand’s presence in the film. Although the balancing act Zhao played between documentary and fiction has finally disappointed, Zhao still has a bright future telling stories of the people of forgotten middle America.