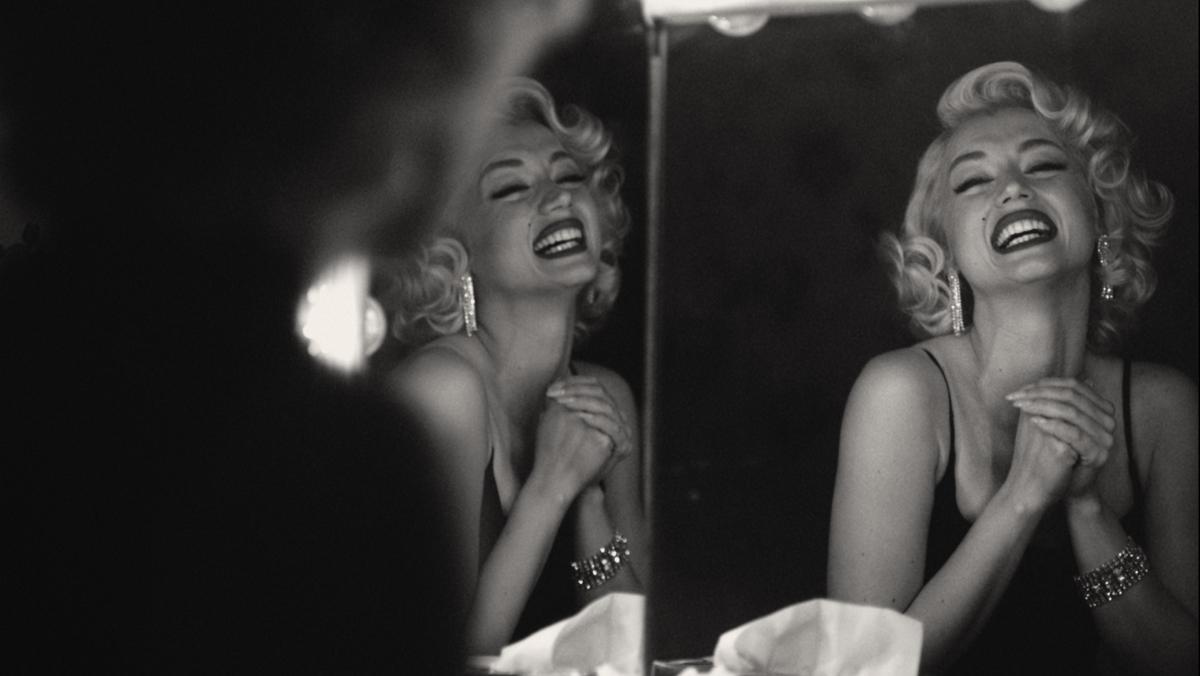 Courtesy of Netflix
"Blonde" is based on the historical fiction novel of the same name by Joyce Carol Oates, depicting Marilyn Monroe (Ana de Armas) at her lowest points in life.
By Sydney Brumfield — Senior Writer
Published: October 10, 2022

In an attempt to go against the developed tropes of popularized biopics like “Bohemian Rhapsody” (2018) and “Elvis” (2022), “Blonde” focuses solely on the alleged darkest moments of Marilyn Monroe’s (Ana de Armas) life. “Alleged,” because the novel that the film is based on, “Blonde” by Joyce Carol Oates, is a piece of historical fiction, as opposed to a nonfiction biography. Whether it’s because of the need to break through the noise, or director Andrew Dominik’s pure disdain toward Monroe, “Blonde” manages to be an extremely aggravating and unpleasant viewing experience.

“Blonde” is an incredibly muddled narrative with poorly executed plot points. There is a large slew of details that serve no purpose, as well as having terrible pacing and a lack of narrative drive. Multiple plot points and characters find themselves being carelessly tossed to the side and never acknowledged again. Even more disturbing is that what Dominik decides to spend extra screen-time and care on are incredibly insulting sequences. Despite “Blonde” being about one of the most iconic women on the planet, it is atrociously misogynistic and demeaning toward them.

Even worse is that “Blonde” tells the story of one of the most objectified women on the planet, all while overtly objectifying de Armas — and not in an intellectual way to highlight or poke fun at the male gaze. Dominik chose to make de Armas topless in multiple scenes where it was not only unnecessary, but extremely inappropriate. De Armas is completely naked aside from underwear when Monroe is physically abused by her husband Joe DiMaggio (Bobby Cannavale). De Armas is unnecessarily topless when her manager and on-set doctor force her to take sedatives so that she can continue to perform on set. De Armas is completely naked for yet again another tramatizing scene when Monroe is kidnapped in the middle of the night and given a forced abortion — the second forced abortion in the film.

“Blonde” manages to be one of the most prominent pieces of anti-abortion propaganda in a year when the U.S. has openly declared a war against access to safe abortions. The dialogue alone would classify this film as anti-abortion. Despite the alleged abuse she is depicted as having undergone as a child, Monroe praises her mother Gladys Monroe (Julianne Nicholson) for not aborting her by saying, “You were brave. You did the right thing. You had your baby. You had me.” Moreover, the three times Marilyn Monroe discovers that she is pregnant, the film cuts to an animated fetus with whom she has conversations with. Not only is it anatomically incorrect because of how early Marilyn Monroe’s pregnancies were, but they are also used to build up the anti-abortion messaging. Dominik has the second fetus speak to Marilyn and say, “You won’t hurt me this time, will you? Not do what you did the last time?” The way in which “Blonde” depicts the abortions is extremely demonic and terrifying, not exactly rhetoric that needs to be spread any further in today’s political climate.

De Armas in the role of Marilyn Monroe does not make or break the project. It’s up for debate whether or not she was the strongest choice for casting, but given the disaster this film already is narratively, the performances would never have made much of a difference.

“Blonde” infantilizes Marilyn Monroe and depicts her as a neurotic, silly, yet incredibly attractive woman. In the end, this film belittles this cultural icon down and defines her by her trauma and supposed daddy-issues, rather than highlighting her remarkable brilliance in spite of them.